Was IMA ponzi scam an open secret in political circles? 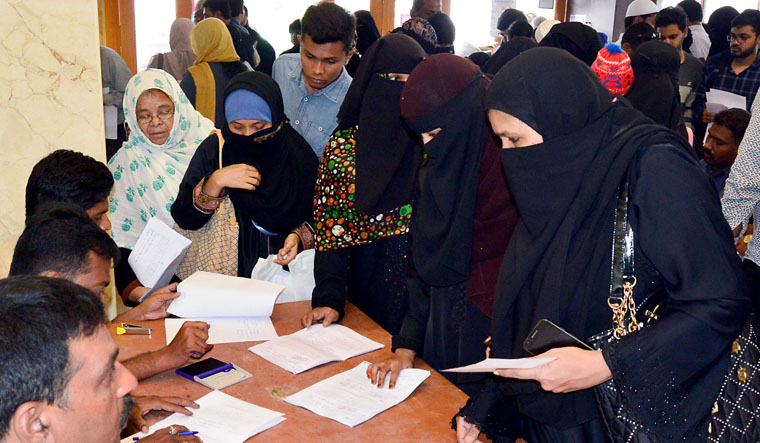 Muslim investors register their complaints against IMA (I Monetary Advisory) jewellery fraud at a temporary police post set up at Shivajinagar, in Bengaluru | PTI

This could be Karnataka’s version of Sarada chit fund scam. A multi-crore ponzi scheme, which thrived on a politician-police-criminal nexus in the form of IMA (I Monetary Advisory), has rocked the state.

Mohammad Mansoor Khan, the promoter of IMA Group of Companies, is absconding, after an audio purportedly of Khan surfaced on Whatsapp on Monday. In the audio clipping, Khan has alleged that he would commit suicide as he was unable to repay the investors. Khan claimed that his company suffered losses after many politicians including Congress's Shivajinagar MLA Roshan Baig extorted crores of money from him. While Baig has denied all charges, his proximity to Khan is now under the lens.

In the last 72 hours, more than 20,000 panic-stricken investors have registered police complaints at a special station set up in Shivajinagar, Bengaluru. But the stream of distraught investors continues to pour in from across the state and neighbouring states too. It is feared the scam could be worth Rs 8,000 to Rs 10,000 crore.

Bengaluru is no stranger to fly-by-night companies, which have duped gullible investors of crores of rupees—Ajmera, Aleefa, Aala, Injaz, Burraqh, Ambidant and now I Monetary Advisory (IMA). Each time, the USP of these fraud companies was “religion”. The companies assured the investors that their investment schemes were halaal (permissible in Islam) or shariah-compliant (interest-free transactions).

In this case too, the modus operandi was the same. IMA roped in local politicians, community leaders, moulvis and an army of agents to brainwash the community into believing that they were shareholders of the company and would get high return on investments.

IMA promised them 10 per cent interest on capital. The company, which claims to have its presence in bullion trading, retail sales of gold, silver, diamond & platinum jewellery, educational academies, credit co-operative and housing society, healthcare service, hypermarkets and supermarkets, infrastructure and real estate development, has a huge network of agents and offices.

Encouraged by the prompt payment of interest for the first few months and the hype created by the company by showing diverse businesses and flaunting the political clout, the investors roped in their family members and friends.

The state government has now appointed a special investigation team headed by DIG B.R. Ravikanthe Gowda. The city police arrested seven directors of IMA, and the bank accounts of Khan have been frozen. His known assets are worth Rs 500 crore.

The scam smacks of a larger criminal nexus as the company survived for 13 years despite an RBI alert and a forfeiture notice by the state government, due to its “high connections”. In 2015, the RBI has sent alert to the state government warning that the IMA group was only a scam-in-the-making. But no action was taken by the police, which instead sent a report stating they could not take action under the Karnataka Protection of Interest of Depositors in Financial Establishment’s (KPID) Act, as the investors were giving funds as “partners” and not “depositors”. The funding was under limited liability partnership (LLP).

In November 2018, the RBI once again wrote to the state government to investigate into the activities of IMA. The assistance commissioner of revenue department, which was probing into all ponzi companies to attach their properties, issued a forfeiture notice against IMA in newspapers, calling the attention of the investors to the fraudulent activities of the company. The public notice also named 16 entities including Mansoor Khan, and asked the people to provide information about their movable and immovable assets. However, the police did not file an FIR citing procedural issues.

A buzz in the political circle is that the scam was an open secret, but fearing the nexus and the backlash from the community during the elections, nobody tried to blow the lid off this scam.

Sources say, IMA got “legitimacy” due to the follies of the political class. Khan’s growing proximity to Baig helped him develop good rapport with other politicians, including the chief minister, who attended the events organised by IMA.

Baig insists that he was not aware of the shady dealings of Khan. Baig, who denies having accepted Rs 400 crore from Khan (as mentioned in the audio clip), admits that the V.K. Obaidulla Government School (where Baig studied) was developed with the CSR funds from IMA.

Baig’s meeting with Union minister Mukhtar Abbas Naqvi in Delhi is also being looked at with suspicion as investors are furious and demand Khan’s immediate arrest.

While a public notice was issued against IMA in January, a month later Baig hosted a mushaira programme in Bengaluru, which was sponsored by IMA. The event was attended by senior Congress leaders like Ghulam Nabi Azad. IMA was also a major advertiser during the Haj camps organised by the previous Congress government, when Baig was the Haj minister, reveal sources.

Another Congress leader in the dock, Minority Welfare Minister Zameer Ahmed Khan, called a press meet to clarify that he had no links with the IMA group or its promoter. He informed that he had sold his land (14,000 sqm) in Richmond Road to Khan for Rs 9.3 crore.

“I had put up my property for sale and Khan offered to buy it. The transaction is all legal as I was paid through RTGS and demand draft.” said Zameer. Strangely, Zameer also made a public appeal (through media) to Mansoor Khan to surrender and work out a repayment plan.

“Let Khan disclose the names of politicians involved and we will recover the money,” said Zameer. Meanwhile, sources pointed out that Khan used his political clout to rope in local moulvis to issue fatwas in favour of investing in IMA. In turn, they got funds for their madarassas (religious schools). But, after the politicians who took huge sum of money failed to return it, Khan was unable to rotate the money or pay the investors. After his fallout with the politicians, Khan too must have felt his business had reached a saturation point. He seemed to have already implemented his exit plan.

A delegation of Congress leaders who met the chief minister and the home minister, sought amendments to the law to check ponzi schemes and to award stringent punishment to the fraudsters. “We are hopeful that SIT will bring the culprit to book. I feel the CBI too could take up the case as it involves investors from four states. The scam has affected the poor people and ponzi companies are exploiting the loopholes in the system. The community should not fall for frauds who use religion to lure them,” said MLC Rizwan Arshad.