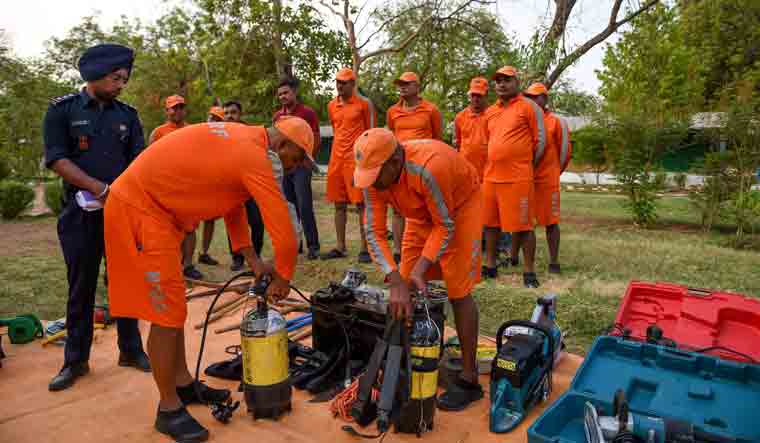 Operations have begun on Wednesday to evacuate nearly three lakh people from the coastal areas of Gujarat as Cyclone Vayu is set to make a landfall between Porbandar and Mahuva, near Veraval on Thursday morning.

According to the latest information from the IMD, the 'very severe' Cyclone Vayu is currently 340 km south of Veraval and is likely to move northward and cross Gujarat coast between Porbandar and Mahuva around Veraval and Diu early morning on Thursday. The wind speed will be between 145-170 km per hour.

Schools and colleges in 10 coastal districts, including Kutch and Saurashtra regions, will remain closed on Wednesday and Thursday. The state government has cancelled 'Shala Pravesh Utsav' (a drive to enroll students in school) in light of the cyclone.

Local administration has started removing large hoardings from the 10 coastal districts. Messages of precautions are being sent to thousands of people in the coastal areas via mobile phone.

The airports at Rajkot, Jamnagar and Porbandar will remain shut on Thursday.

The pre-cyclonic effects have already started showing in Gujarat. Winds have started blowing in the coastal areas of Gujarat and there have also been reports of scattered rainfall from South Gujarat. Ahmedabad, too, received a slight drizzle early in the morning.

The preparedness and a stock of the evacuation will be taken at a high-level meeting to be held in Gandhinagar on Wednesday in the afternoon. Chief secretary J.N. Singh will also take part in the meeting. He is in touch with his counterpart in Odisha to obtain finer details of how the state tackled Cyclone Fani.

As many as 34 Army, 2 BSF teams, Air Force, Coast Guard and Navy units are on the standby. More than five lakh food packets are being prepared for the cyclone affected.