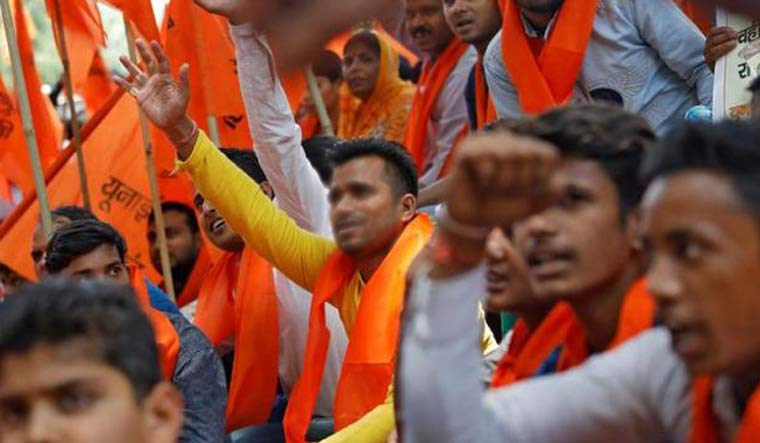 Civil society organisations in Madhya Pradesh blamed poverty and unemployment among youth for the upsurge in incidents of mob fury in the name of cow protection and communal violence in the state. The “increasing grip” of Hindutva politics that use such poor and unemployed youths and failure of the state machinery to curb the trend are also to be blamed, they said on Friday.

Representatives of the organisations, who conducted fact finding in two separate incidents of mob fury and communal clash in Seoni and Dewas districts respectively, said it was unfortunate that even the Congress government had not been able to plug the incidents. They demanded firm steps by the government to curb the menace of violence and hatred in MP.

At a press conference held in Bhopal, they accused ‘Hindutva groups’ functioning by the names of Bajrang Dal, Shri Ram Sena and Karni Sena of being those responsible for spurring of such incidents and using the impoverished, poorly educated and unemployed youth to further their cause of hatred.

The organisations demanded that “the young citizens who are presently trapped in Hindutva politics” be identified and rehabilitated to live humane lives and contribute constructively to the country.

They also demanded that adequate compensation and jobs be given to the surviving victims of those who have died in communal violences.

Representatives of organisations like MP Mahila Manch, National Alliance of People’s Movement, All India Dalit Mahila Adhikar Manch among others, conducted fact finding of the incident in Seoni where three persons were brutally beaten up for allegedly transporting beef. They also looked at the incident of a clash between dalits and Muslims in Dewas district that left a dalit youth dead.

Addressing the press conference, Rajkumar Sinha of NAPM, Shivani and Saba of MP Mahila Manch and Gayatri and Vijay of Dalit Mahila Adhikar Manch, said that in both incidents they found that the victims and even the accused came from impoverished background and belonged to deprived sections of society (scheduled caste, scheduled tribe and minorities).

The families of both the victims and the accused are facing deep financial and social troubles due to such incidents. In Seoni, the mother of an accused, Yogesh Uike, said that her son would not have done such an act but for his “friends from the city”. Even the mother and grandmother of the main accused, Shubham Baghel (who is known to be involved in such incidents earlier), said they did not want their son walk this path.

The team members said that one of the victims, Tausif Khan, was returning home from his aunt’s place when he was caught in the situation and beaten up brutally since he was found to be a Muslim.

In Dewas, elders of both communities said that the incident would not have happened if they were present. In Piplarwa village of Sonkutch tehsil, violence including stone pelting had erupted after arguments between youths in a dalit marriage procession and the Muslim youth standing outside a mosque. The marriage procession had been asked to play music in a low volume near the mosque as prayers were underway, the fact finding team members said.

After the incident, the elders of both the communities held meetings and activities to ensure communal amity and told the fact finding team that the area had never witnessed any such clash after 1954. They also said that presence of youth from other villages and town in the marriage procession caused the tension, the team members said.