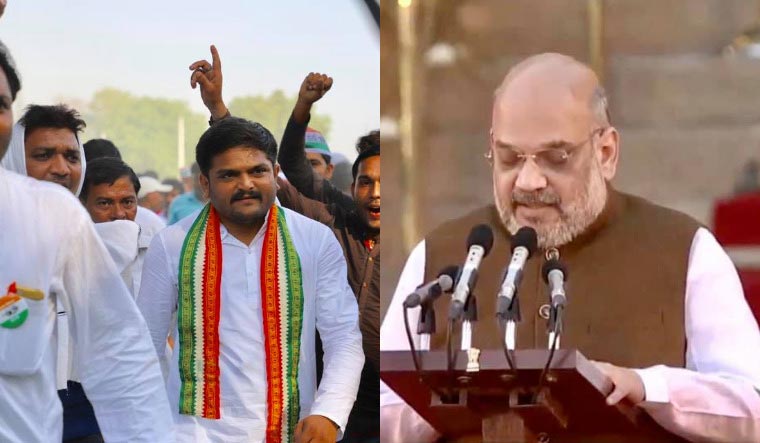 Congress leader and Patidar reservation activist Hardik Patel on Friday tweeted that he had received messages from BJP supporters asking about his future after Amit Shah became home minister.

Taking to Twitter to congratulate Shah, Patel wrote, “Some bhakts (BJP supporters) had messaged me, asking what would be my fate. The bhakts are very happy that Shah is now home minister. Will youth fighting against the BJP be killed?...” Patel ended the tweet on a seemingly wistful note, claiming “things would happen according to God's will”.

Patel had emerged as an outspoken opponent of the BJP after he was at the forefront of protests in 2015 demanding that the BJP government in Gujarat provide reservations in jobs and educational institutions to members of the Patidar community.

Patel campaigned extensively against the BJP in the 2017 Assembly elections, playing a key role in reducing the BJP's tally in the 182-member legislature to 99 seats. Shah, as BJP president, had declared the BJP had aimed to win 150 seats in the 2017 Gujarat Assembly polls.

Patel joined the Congress formally in March this year. While the Congress had expected to do better in Gujarat in the 2019 Lok Sabha election, the party drew a blank, losing all 26 seats in the state to the BJP for the second straight general election.

Patel's tweet, suggesting possible risks of getting killed, appears to be a snide attempt at highlighting Shah's record as home minister of Gujarat. Shah was home minister for several years in Gujarat during Modi's time as chief minister, with multiple encounters happening in his tenure.

Shah was forced to resign and was arrested in 2010 over allegations he was involved in the killing of gangsters Tulsiram Prajapati and Sohrabuddin Sheikh and Sheikh's wife Kauser Bi. Shah and the BJP had accused the then-ruling UPA government, led by the Congress, of trying to frame him in order to target Modi. In late 2014, Shah was discharged in the case by a CBI court.