This is the story of former CI, Gorantla Madhav, who is now the MP of Hindupur 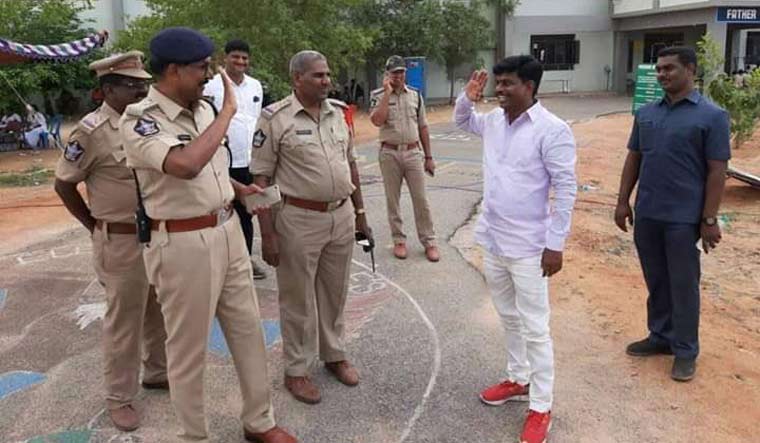 Why should an MP salute a police officer? There is a story behind the picture that has gone viral in social media and the question it poses.

This is the story of former Circle Inspector, Gorantla Madhav, who is now the MP-elect from Hindupur in Anantapur district of Andhra Pradesh.

Madhav, the former CI from Kadiri, won from the Hindupur parliamentary seat on a YSR Congress Party (YSRCP) ticket by a huge majority of 1,40,748 votes against the sitting Telugu Desam Party (TDP) MP Kristappa Nimmala.

And now, a photo of Madhav and his former boss, CID Deputy Superintendent of Police Mahboob Basha, exchanging salutes in the presence of other police personnel, has gone viral on social media.

After the photo went viral on social media and the curious Twitterattis abuzz with discussions on 'protocols', Madhav clarified that he saluted his former superior when he saw him on counting day (May 23) at a counting centre. "I saluted the DSP first and then he responded to me. I adore him. It was mutual respect between us," said Madhav to the media.

Madhav, who has huge fan following among the localites, made headlines after having a face-off with TDP leader and former MP from Anantapur, J.C. Diwakar Reddy, over an incident of violence in Chinnapolamada village in Tadipatri. Reddy, known for his controversial remarks, called the police ‘hijras’ and used derogatory terms to describe the force over their alleged inability to handle the situation.

Responding to Reddy's comments, Madhav, warned that the police would not remain quiet if the ruling party leaders make such cheap comments. He also threatened to cut off the tongues of those who disrespect the police force.

“Madhav, I dare you to come without your police uniform. I will also come after removing my Khadi shirt. Be it your house in Kadiri or the Clock Tower in Anantapur. Would you come or should I come?” said Reddy in a response to Madhav.

After the incident Madhav decided to quit police force and join politics. The viral photo, in fact, has gained him more popularity, with many praising his "simplicity" and "humility".