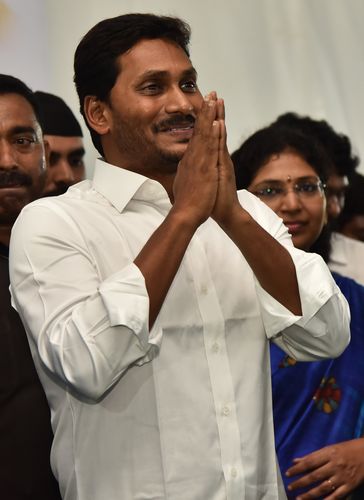 On counting day, the atmosphere at the new YSR Congress office in Tadepalli resembled that of a small stadium. The party workers huddled together like excited cricket fans cheering on their beloved batsman—Jagan Mohan Reddy. And when the party touched 150 seats in the assembly elections, they started dancing, bursting crackers and distributing sweets. Even they could not believe that they had won most of the 175 assembly seats as well as 22 Lok Sabha seats.

A few kilometres away, the Telugu Desam Party office also looked like a stadium, albeit a deserted one. Most of the ministers had lost, and even Chief Minister Chandrababu Naidu was trailing in his Kuppam seat at one point. He sneaked through, but his son, Nara Lokesh, lost in Mangalagiri. The party won only 24 assembly seats and three Lok Sabha seats.

Naidu had kept his ear to the ground, but put on a brave face. “There was some panic even during campaigning and he looked like he had lost out,” said Parakala Prabhakar, former head of the TDP government’s communications wing. He said Naidu wanted to stop Prime Minister Narendra Modi from forming government, “but the stature of a leader counts only if he has the numbers”.

A political analyst said one of the many factors that worked against Naidu was his frequently changing political stance. Reddy, on the other hand, was seen as a rebel with a cause, fighting a powerful system. Apart from the goodwill of his father, former chief minister Y.S. Rajasekhara Reddy, it was his 14-month padyatra that won the hearts of the masses. In the wave it generated, many of his candidates who were doubtful of winning, sailed through. Reddy himself won the Pulivendla assembly seat by about 90,000 votes.

Throughout the day, he was holed up in his office-cum-home near Vijayawada, meeting family and senior party leaders. His political strategist Prashant Kishor was also by his side. “This is a historic win,” he told the gathered crowd outside the building after the victory. “This mandate comes with a tremendous amount of responsibility and I will prove what good governance is. In less than one year, I will ensure that people consider me a good chief minister.”

Reddy is likely to be sworn in in Vijayawada on May 30, along with a mid-sized cabinet.

Though the YSR Congress emerged as one of the largest parties after the BJP and the Congress, most party leaders were slightly dismayed. They had hoped for a hung Parliament, and would have happily backed any party in exchange for special category status for Andhra Pradesh. With this result, however, they have no decisive hold at the Centre. “We will continue to fight for special category status,” said senior leader Y.V. Subba Reddy. “It doesn’t matter who is at the Centre.”

Another notable story of the elections was the failure of actor Pawan Kalyan’s Jana Sena. He contested in two seats—Gajuwaka and Bhimavaram—and lost despite a high-voltage campaign. The party had contested in 140 assembly and 18 Lok Sabha seats. The national parties, as expected, drew a blank.