How Masood Azhar was finally blacklisted by UNSC 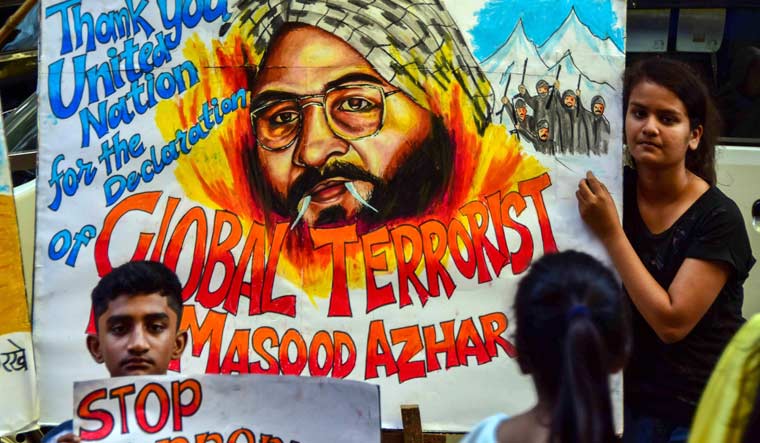 On March 17, Chinese Ambassador to India, Lou Zhaohui, smeared in gulal at a Holi celebration he hosted, earnestly said, "It will be resolved, believe me." He was alluding to China again blocking the move to list Masood Azhar, founder of the Jaish-e-Mohammed, as a global terrorist. Zhaohui stressed that it was only a technical hold that his country had placed at the 1267 sanctions committee of the United Nations Security Council (UNSC). There is room for continued consultations, he said.

Given that, with its "technical hold", China was able to block three previous attempts to list Azhar since 2009, Zhaohui's statement was significant. Equally significant was India's response to the Chinese move. While regretting the outcome, the ministry of external affairs had carefully chosen not to name China even indirectly. The ministry said India will continue to pursue all available avenues [to get Azhar banned]. After the last failed bid in 2017, India had blamed "one country" for blocking the listing. Clearly, it was different this time.

However, behind the scenes, there were major diplomatic activities across countries and missions. India reached out to every member on the security council individually, and through multilateral platforms, presented them with the proof it had of Azhar's hand in masterminding terror attacks in India, which included Pulwama and Pathankot.

India worked on China untiringly. It sent two of its naval ships to participate in an international fleet review, to mark the 70th anniversary of the People's Liberation Army. Foreign Secretary Vijay Gokhale himself went to Beijing on April 22. Soft-spoken yet forceful, Gokhale was India's envoy to China in his last appointment, where he was involved in the tricky diplomacy to resolve the Doklam stand-off. And while India kept away from the Belt and Road Forum, China's biggest diplomatic event of the year, it prudently did not scream out its criticism of the Chinese connectivity initiative, as it had in the past.

India's China strategy was two-pronged. It knew that China was too powerful a nation to be diplomatically isolated, but it could be made to "stick out like a sore thumb" in its defence of Pakistan if India was able to build up a rock solid case against Azhar and present it to every stakeholder, say sources. The other was to continue relations with China in the new Spirit of Wuhan, and guided by the Astana Consensus, not letting differences become disputes.

Both countries know how counter-productive conflict can be at this stage of global dynamics. And, two strong economies talk the language of money. Even at the heights of Doklam, there was barely a dent in the economic ties. According to an MEA note, in the first eight months of 2017, Indo-China trade increased by 18.34 per cent year-on-year, to USD 55.11 billion.

India also changed the dynamics with its non-military strikes at a terror camp in Balakot, deep inside Pakistan. "We correctly assessed that the world was fed up of Pakistan. We called Pakistan's nuclear bluff," said Parthasarathy. The support India got for this action from the international community changed the rules of the game.

The 2017 motion against Azhar too had been moved by the Permanent Three – UK, France and the US—but this time, they decided put more heft behind the motion. Dominic Asquith, the British High Commissioner in India, said that while they had been working towards this goal for a decade, after Pulwama, they felt an urgency to get it done.

France, while banning Azhar nationally, also moved a proposal for the same in the European Union. These moves, it said, would bolster their case when the technical hold came up for a review. Diplomatic sources say that the trio also compiled additional information, clinching Azhar's role in terror activities, which they presented to the sanctions committee on April 27. They left no scope for another hold this time, either by China or any other member. They also wanted the case to be watertight, so that it would not be contested later at an international court, said a diplomatic source.

India has been through similar experiences before, in its endeavour to get a Nuclear Suppliers Group membership. The last time round, it thought only China would object, but was surprised when several other nations like New Zealand also objected.

The US, not one for subtleties, expedited matters when it announced it would take the matter of Azhar's listing to the UNSC directly, bypassing the sanctions committee. Discussions in the committee are behind closed doors. In the UNSC, it is open to all, said former high commissioner to Pakistan G. Parthasarathy. China would not have wanted this.

It also meant that the decision had to been taken soon, with the US demanding an immediate lifting of the hold. According to diplomatic sources, China wanted to push the date as far as it could, citing reasons like elections in India. Indonesia, a non-permanent member of the UNSC, which is heading the sanctions committee, conveyed to China the impatience in the UNSC.

Indonesia is a friend India had been wooing majorly in recent years. India is constructing a deep sea port at Sabang. Last year, India and Indonesia held their first bilateral naval exercise, Samudra Shakti. In fact, India had reportedly supported Indonesia's bid to the UNSC against Maldives, which was then under the rule of China-leaning Abdul Yameen.

China must have calculated that the gains from shielding Pakistan and Azhar were far less than the losses and damage to its reputation in the international community, said Ravi Bhootalingam from the Institute of Chinese Studies. Diplomatic sources also say that the body language between Xi Jinping and Imran Khan, when the latter visited China recently was telling. "All that bonhomie was China's way of telling Pakistan and the world that Pakistan remains its BFF (best friend forever), even though China lifts its technical hold on the sanction motion."

There was some give and take. China managed to get the mention of Pulwama and the Kashmir links out of the statement, something which Pakistan was quick to point out to the world. And, on May 1, when the deadline for objections to the April 27 review expired, Azhar was banned, amidst cheering by everyone.

Alexandre Zeigler, France's ambassador to India, called it "a good news in the global fight against terror, which is the cornerstone of our strategic partnership". He highlighted France's key role in this success, which, he said, started out with getting the UNSC to condemn the Pulwama attack, a first for any terror attack in Kashmir.

Zeigler said the struggle started in 2001, after the Parliament attacks in India, post which the JeM was blacklisted, though its founder was not. British High Commissioner Asquith said he was confident of the outcome this time. He attributed it to a combination of the right timing, the right efforts and the right people. Indonesia, too, straightened its collar, making it known to the world the role it played in this success.

For Pakistan, the development has come with associated advantages. With its finances totally in the red, it desperately needs money from the international community. And the greylisting by the Financial Action Task Force (FATF) is a constant worry. The FATF will review its decision in the next few weeks, and if it finds that Pakistan hasn't done enough in preventing terror from its soil, Pakistan risks getting blacklisted, which will dry up fund flow.

The UNSC ban on Azhar means that Pakistan will have to impose a travel ban on him, freeze his finances and put an embargo on arms. Pakistan has been quick to point out that it had proscribed Azhar under its Anti-Terrorism Act for sime time, even before his case for listing was taken up by the sanctions committee. A release from Islamabad says, "Our position is in line with the statements of prime minister Khan, who clearly stated that there is no space for any proscribed organisation or its affiliates to operate from Pakistani territory."

Pakistan has issued orders to freeze Azhar's assets. Will these moves keep the wolf away from Pakistan's door? More importantly, will it stop Pakistani sponsored terror on Indian soil?