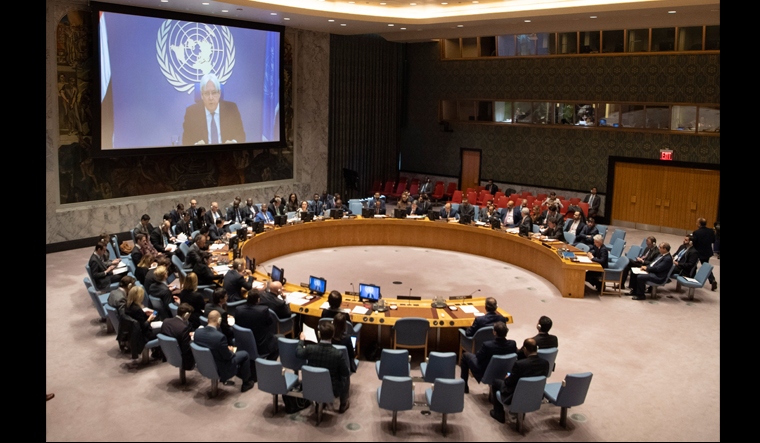 A UN Security Council resolution on the Pulwama attack contained specific language proposed by India through its partner countries, including the naming of Jaish-e-Mohammed and calling for bringing the perpetrators of the crime to justice, official sources said on Friday.

The UNSC, comprising 15 permanent and non-permanent members including China, on Thursday condemned in the "strongest terms" the "heinous and cowardly" terror attack perpetrated by Pakistan-based terror group Jaish, in a show of solidarity and support to India.

India had mounted a diplomatic offensive to isolate Pakistan in the international community for its support to terror groups and cross-border terrorism.

In the resolution, the UNSC also reaffirmed that terrorism in all its forms and manifestations constituted one of the most serious threats to international peace and security and underlined the need to hold perpetrators, organisers, financiers and sponsors of these reprehensible acts of terrorism accountable and bring them to justice.

The resolution was adopted unanimously by the UNSC, including China, and it contained specific language that India had proposed via partner countries, including on the naming of the Jaish and bringing perpetrators to justice, the sources said.

The UNSC urged all states, in accordance with their obligations under international law and relevant Security Council resolutions, to cooperate actively with India and all other relevant authorities to bring perpetrators of the Pulwama attack to justice.

The UNSC resolution also reiterated that any acts of terrorism were criminal and unjustifiable, regardless of their motivation, wherever, whenever and by whomsoever committed.

More than 40 CRPF jawans were killed in a suicide attack by a Jaish suicide bomber in Jammu and Kashmir's Pulwama district on February 14, sparking outrage in the country.