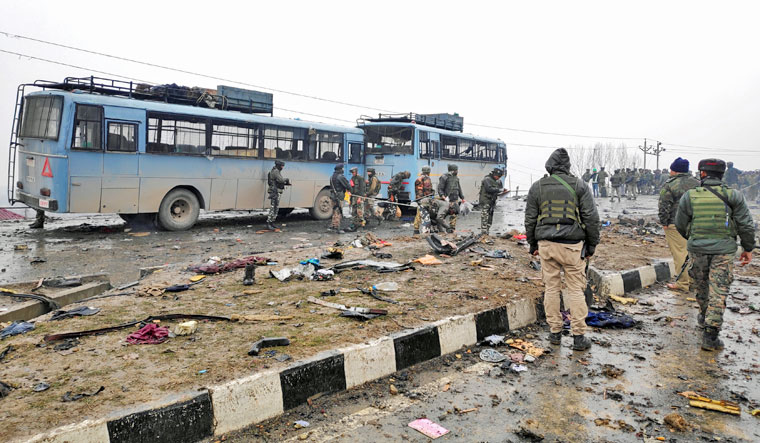 At least 40 CRPF men were killed after a Jaish-e-Mohammad suicide bomber rammed an explosive-laden car into the 55-seater bus they were travelling in at Lethpora, Pulwama in South Kashmir.

Home Minister Rajnath Singh will reach Srinagar to take stock of the situation arising out of the single deadliest attack ever on security forces in Kashmir.

The CRPF convoy of over 2000 personnel were coming to Srinagar from Jammu after the highway opened for one way traffic after several days of closure due to heavy snowfall and landslidies.

According to sources the bomber struck around 3.15 pm. He was driving a Mahindra Scorpio packed with explosives. The blast turned the bus and the car of the suicide bomber into a mangled heap of metal. So powerful was the explosion that, body parts of the dead were strewn across the road amid smoke billowing from the targeted vehicle.

Jaish-e-Mohammad claimed responsibility for the attack and identified the suicide bomber (fidayeen) as Adil Ahmad from Kakapora in Pulwama, who had joined the Jaish-e-Mohammed in 2018.

The Jaish also released a recorded video message of the suicide bomber. In the 44 second video, the suicide bomber is seen sitting in front of a bunch of AK 47 magazines and holding an AK 47 rifle, reciting Islamic poetry and exhorting the people to stand up and asking them to join Jaish-e-Mohammad.

A National Investigation Agency team is expected to reach Srinagar to collect the samples of material used in the attack for forensic analysis.

CRPF spokesperson Sanjay Singh said the CRPF batch that was attacked was travelling from Jammu to Srinagar. “They had halted at Qazigund. The bus was hit by the car which was laden with explosives,” he said. “We cannot tell anything about the casualties as we are still trying to ascertain the details.”

The J&K police in a statement said that it has began investigations into the attack and will soon get to the bottom of the plot hatched by the Jaish to target the security men.

The injured are being treated at the Army hospital in Srinagar. The toll is likely to go up as the condition of some of the injured is stated to be critical.

The attack has happened at a time when security forces gained an upper hand on the militancy by killing more than 250 militants last year.

The suicide attack was first carried out by Jaish-e-Mohammad in 1999 when Afaq Ahmed Shah, a Srinagar boy, tried to ram an explosive-laden Maruti 800 into the entrance of Army's 15 Corps headquarters in Srinagar.

The Army soldiers, however, challenged the attacker and forced him to detonate the explosives prematurely.

The Jaish carried another suicide attack the next year at the same place which was also foiled.

In 2001, the group then detonated a Tata Sumo filled with explosives outside the gate of the old assembly building at Srinagar's Jehangir Chowk in which more than 12 people were killed. After the explosion, three to four Jaish militants barged into the assembly complex and were later killed in a long gunfight.

Thursday's attack comes on the heels of the 2017 attack by Jaish fidayeens on CRPF camp at Lethpora in which five CRPF men were killed. Two of the fidayeens were local boys including the 16-year-old Fardeen Khandey from Tral. The fidayeen had for the first time used steel tipped bullets for maximum impact.