Modi is campaigning for minister of state Jitendra Singh, who is sitting Udhampur MP 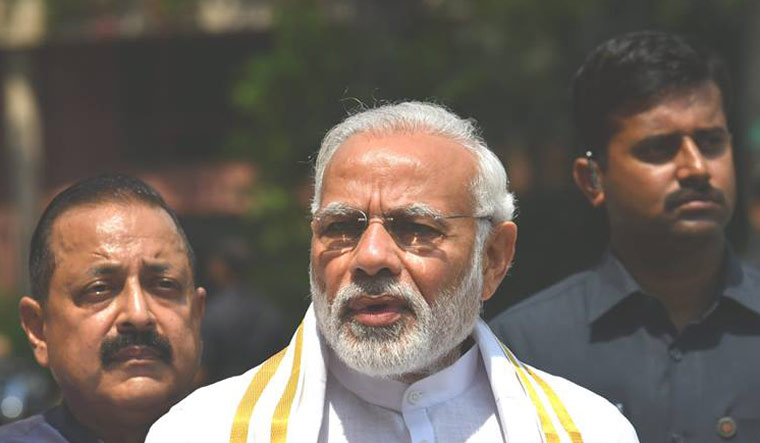 Jitendra Singh, who is seeking re-election from Udhampur, is a minister of state in the Prime Minister's Office and is also considered close to Modi and the RSS.

''Prime Minister Narendra Modi is coming to address a rally of 1 lakh people in Kathua tomorrow,” BJP state president Ravinder Raina told THE WEEK on Saturday. ''Our supporters from Kathua and parts of Udhampur district will participate in the rally.''

Kathua attracted national and international attention after a minor girl from the Bakerwal community was kidnapped, raped and murder at Rasana in January 2018.

The Kathua case shocked millions of people across and outside India. Police, after an investigation, arrested seven people including the custodian of a temple at Rasana, his son and three policemen for planning and executing the crime. The case was transferred to Pathankot from Jammu after lawyers affiliated with the BJP turned hostile against the counsel of the victim's family.

There were protests in Jammu organised by the Hindu Ekta Manch, backed by Hindu rightwingers, to hand over the case for a CBI probe.

The Mehbooba Mufti-led PDP-BJP government, however, refused to accept the demand for transferring the case to the Central agency.

Two senior BJP ministers in the state government, Chowdhary Lal Singh and C.P. Ganga, were forced to resign for attending a rally organised by the Hindu Ekta Manch in favour of the accused.

Angered by the BJP's decision to axe him, Lal Singh launched a campaign in Jammu for a CBI probe into the case and formed his own party, the Dogra Swabhiman Sangathan.

Lal Singh is contesting from both Jammu and Udhampur Lok Sabha constituencies. His presence in the Lok Sabha race is a cause of concern for the BJP as he is likely to split the Hindu vote, which would prove beneficial to the opposition Congress.

According to sources, the BJP is planning to gather thousands of supporters from the 17 assembly constituencies that fall under Udhampur parliamentary constituency at the sports stadium in Kathua for Modi's rally.

The rally will begin at 11am. It will be addressed by prominent BJP leaders from the state and Centre. This will be the second time Modi would be addressing a rally in the Jammu region.

On March 28, he addressed a massive BJP rally at Akhnoor to drum up support for the party candidate for Jammu, Jugal Kishore Sharma. Jammu went to polls in the first phase on April 11.

In the last Lok Sabha polls, Modi had paid a visit to the shrine of Mata Vaishno Devi temple at Katra before addressing a rally in support of Jitendra Singh.

Jitendra Singh had defeated Congress heavyweight and former chief minister of Jammu and Kashmir Ghulam Nabi Azad by a margin of over 60,000 votes, largely due to the Modi wave.

The BJP had won both the seats in the Jammu region, as well as Ladakh by 34 votes, against the Congress in the 2014 general elections.