There are quite a number of candidates for the top post 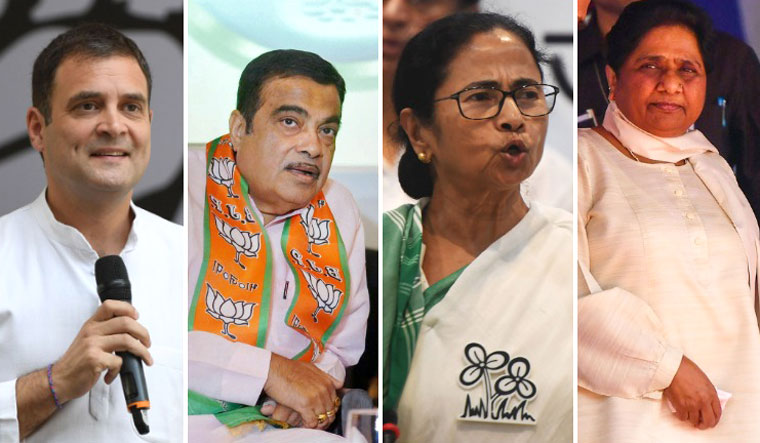 Look no further. That ad line could well be what the BJP would like to tell the voters of India, pointing to Prime Minister Narendra Modi.

The BJP has, thanks to party president Amit Shah's tireless efforts, become the largest party, and made fresh inroads into areas where there was not a single BJP face. Barring seat sharing with its allies, they will field enough candidates to form a pure BJP government if possible. The other party that can field candidates across the country is the Indian National Congress.

But the next prime minister need not necessarily be Modi or Rahul Gandhi.

Many “mood of the nation” surveys over the last two years have shown Prime Minister Modi topping those preferred-for-the-top-job lists after the Lok Sabha 2019 elections. There are also surveys that show the ruling National Democratic Alliance having an edge, suggesting that quite likely Modi will win a second term in office. All that, however, is speculation, albeit a very well calculated one.

But there is the known political reality: Modi's popularity has dropped, by whatever degree. He came into office of the prime minister of India, riding a high wave of popularity, won on the back of the promise of achche din (good days) to the Indians after a scam-ridden UPA-2 regime.

Among the promises that come up for mention without fail, is one that would have brought Rs 15 lakh into the bank account of every Indian. Modi arrived at the sum simply be dividing his assessment of black money stashed abroad by the total population of India. When Jan Dhan accounts were being opened hurriedly with the help of BJP karyakartas who would take people to bank branches and help with the opening, this promised sum seemed to on the way. What came instead was demonetisation!

But there has been no dearth of promises by the government—10 per cent reservation for the economically weaker sections and the PM Kisan Yojana.

And there have been other failures, too: floundering economy, no growth in jobs, drop in GDP growth, and social tension, with minorities feeling unsafe and ignored. His divisive nature is evident at election rallies these days—for instance, when he spoke about the Samjhauta Express case and charged the opposition—Congress, particularly—of talking about “Hindu terrorism”, and then pointing out the demographics of Wayanad as Congress president Rahul Gandhi was on his way to file nomination from there. Not to mention, that the scar of Godhra is yet to be healed.

All these indicate that while the party may come back, the numbers may be fewer, empowering the allies like the Shiv Sena and the Shiromani Akali Dal. Modi is no Vajpayee. The Sena has criticised the prime minister, and the Akalis have their own grouse. Will they want a more accommodating MP to be the Leader of the House?

It is, in this context, that the name of a seemingly affable Nitin Gadkari has been surfacing for the last two years or so. The minister for transport and highways, Gadkari, has been the BJP president with fair degree of success. He has friends and admirers across the party divide. The opposition benches in Lok Sabha, without any grudge, said Gadkari was the only minister who has achievements to show in his ministry. Add to this, the fact that he is believed to be close to the RSS, whose blessings count in the BJP stable. Gadkari lost his second tenure as party president when his Purthi group of industries courted controversy. He hid his hurt, and opted out of any role in the family-owned businesses, and continued his work in the party. As a loyal party man, he was quick to deny reports predicting a possible future as PM for him. But those reports have not died down. On the contrary, they get reinforced every time the PM disappoints the nation, as he did by not publicly pulling up Uttar Pradesh Chief Minister Yogi Adityanath for the infamous “Modi ki Sena...” speech.

The Congress has a tradition that stems from it being a party revolving around the Nehru-Gandhi family. From Lok Sabha to Rajya Sabha, the leadership issue has been left to the party president, a Gandhi. The elected members meet, pass a resolution authorising the party president to name the leader, and that is considered democratic. Rahul Gandhi, in his hesitant days, did not answer questions about him being a prime minister should the Congress win. But, at the University of Berkeley, he told the world that he was ready for the job, in case his party won and elected him for the post.

The Congress president recently said, "We have had discussions with allies and what we decided is that this is a two-stage process—one is to get together and defeat the BJP and stage two is, once the election is over, we will decide what happens,” indicating he is not unaware of the reality of the state of opposition unity, and the many aspirants in other parties.

Mayawati tops that list. Her Bahujan Samaj Party does not have a single member in the current Lok Sabha, though her party fielded candidates in 503 seats in 2014. There are BSP supporters across the country, but the BSP hardly has any footprint outside UP, where this time around, the party is going to polls hand-in-hand with arch-rivals Samajwadi Party. Mayawati's chance of making it to the top post will come only if the Congress contribution to the non-BJP MPs' kitty is dismal. This even if a Trinamool Congress has more MPs than the BSP, given Mayawati has often worn her dalit tag and gender status on her sleeve.

Interestingly, when she became the UP chief minister for the first time, it was with the support of the BJP that called her “the miracle girl child of Indian democracy”. If the BSP-SP combine get about 60 or more seats in the next Lok Sabha, and the Congress, TMC, Left parties fare reasonably well, there is little to stop Mayawati from pitching for the top post, and the combined opposition from giving India its first dalit woman prime minister.

Mamata Banerjee's Trinamool Congress, too, does not have footprints across the country, but her strong and robust voice against the Modi government and the BJP make her a possible candidate for the top post, should the numbers stack up in a way that makes room for a coalition government. TMC leader and Rajya Sabha member Derek O'Brien has often pointed to her popularity among the youth, and her abilities and experience for the top job—she has been a Cabinet minister (railways), launched a party after walking out of the Congress, ended the Left parties' dominance in West Bengal and made TMC a force to reckon with.

The Prime Minister's Office is as much about politics as it is about governance. And politics is the art of the possible, which catapulted a regional leader like H.D. Deve Gowda to the office of the prime minister as the head of the coalition of 14 parties. It could be a dark horse yet again.