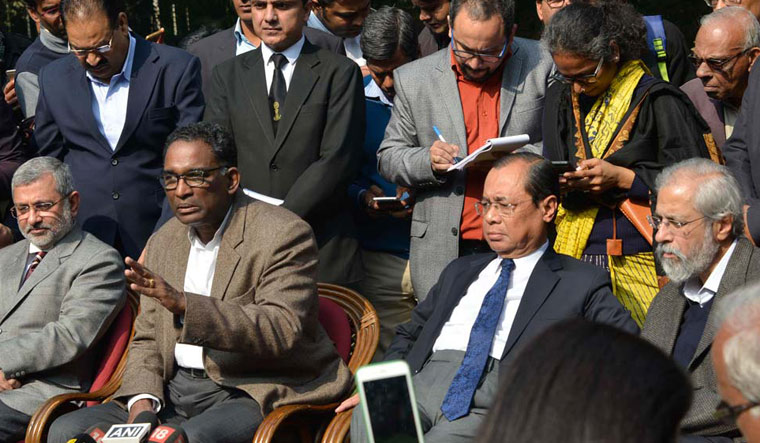 The unprecedented press conference by four Supreme Court judges on January 12, 2018, was perhaps the most telling episode with regard to how strained the relations between the judiciary and the Narendra Modi government have been. The issues raised by the judges mainly pertained to interference by the executive in the functioning of the judiciary. Their allegation was that the then Chief Justice of India Justice Dipak Misra was not acting independently, especially when it came to allocation of politically sensitive cases.

The extremely serious charge against the Modi dispensation was that it had compromised the independence of judiciary, a pre-requisite for the survival of India's democracy. The press conference resulted in a move by the opposition parties to bring an impeachment motion against Justice Misra.

The top judiciary was a divided house, and the divisions became an arena for political attacks and counter-attacks.

“If the judges would have kept quiet, what was happening would have continued. They could not have gone to any other forum. The CJI had refused to address the issues. So they took the extreme step,” said Supreme Court lawyer Shilpi Jain.

The judges' press conference happened in January 2018, but it was perhaps only a culmination of the tension between the government and the judiciary that was simmering since the former's enactment of a law for setting up of National Judicial Appointments Commission (NJAC) and its subsequent trashing by the Supreme Court.

The tussle between the judiciary and the government was aggravated by what was perceived as an inordinate delay on part of the executive to clear recommendations made by the collegium for appointment of judges to the high courts and the Supreme Court even as vacancies for the posts of judges piled up.

The tension peaked when the collegium's recommendation to elevate Justice K.M. Joseph to the apex court was returned. Senior members of the judiciary went public with their criticism of the government, asking why it should take months to clear recommendations for appointments when there was a severe shortage of judges. The critics even said the government sat on recommendations which it felt were not suited to its interests, and that it wanted to appoint judges who were obliging.

However, Union Law and Justice Minister Ravi Shankar Prasad rubbished the criticism that the government delayed appointment of judges, saying the Modi regime appointed as many as 315 judges to the high courts and 17 judges to the Supreme Court in its first four years. He also reminded that under the Modi government, the sanctioned strength in the high courts increased from 906 to 1,079, and the sanctioned strength in the subordinate courts went up from 19,518 to 22,525.

In recent months, the appointment of judges has picked up pace, as acknowledged by Chief Justice of India Ranjan Gogoi himself. “Appointments are happening! As the Chief Justice, I am telling you that whatever is pending is pending before the Supreme Court collegium,” Gogoi said on March 25 while hearing a PIL seeking directions to the government for appointment of judges. The CJI further said around 70 to 80 proposals are before the collegium, while there are hardly 27 pending before the government.

Justice Kurian Joseph told THE WEEK in an interview after he retired in November 2018 that while the government has stated on the floor of the house that it is not yet final, the Supreme Court has taken a stand that it is final. “But the stand of the present Chief Justice is to have a better dialogue on such issues... The impasse should be resolved soon because the institution cannot continue to function on the basis of a draft MoP in the matter of selection and appointment (of judges),” he said.

Senior advocate Lalit Bhasin said the government and the judiciary should decide the outstanding issues with regard to the MoP internally. “There needs to be a constructive dialogue between the higher judiciary and the government. They could have taken the help of some well known jurists such as Fali Nariman, Soli Sorabjee or Prof. N.R. Madhava Menon in reaching a resolution,” he said.

If the judiciary had a lot to complain about with regard to the government's alleged interference in its functioning, the executive too has complained about judicial overreach. A string of judgements, such as Sabarimala, Diwali crackers and the SC/ST law, prompted the government to criticise the court for encroaching into the domain of the executive.

Union Finance Minister Arun Jaitley described the Supreme Court's quashing of the NJAC law as “tyranny of the unelected”. When the court asked the government to set up a national disaster relief fund, Jaitley said, “We have the National Disaster Response Fund and the State Disaster Response Fund and now we are being asked to create a third fund. The appropriation bill is being passed. Now outside this appropriation bill, we are being asked to create this fund. How will I do that? India's budget-making is being subject to judicial review.”

The five years of the Modi regime saw a spurt in the tensions between the judiciary and the government. And the effects of the confrontation between the two can still be felt.