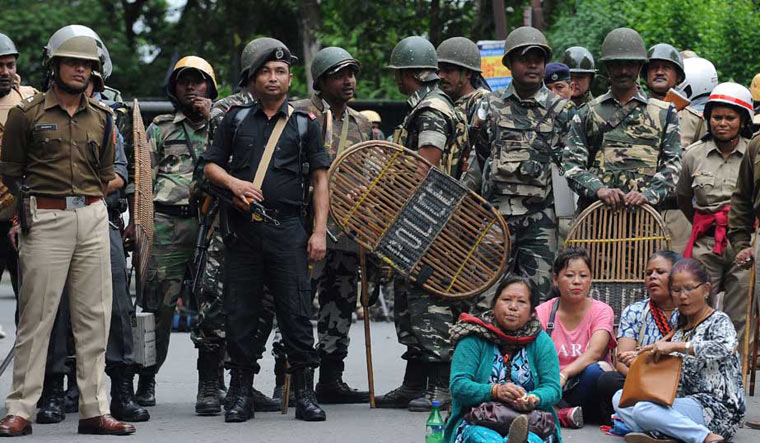 For the first time in about three decades, the demand for a separate Gorkhaland state is not a poll issue in the Darjeeling Hills as parties, including the indigenous GJM and GNLF, are stressing on development and restoration of democracy in the region.

The statehood demand and implementation of the Sixth Schedule of the Constitution had been major poll planks in the Hills at various times since the beginning of the protracted Gorkhaland movement in 1986.

This time, the statehood issue has not found favour with the main opponents, the TMC and the BJP, and also the GJM and the GNLF, who are not in the fray, but are nevertheless deciding factors in the Darjeeling Lok Sabha seat.

"Statehood is not an issue for us this time. We are stressing on overall development of the Hills, which it has been deprived of for so many years," said Amar Singh Rai, a former Gorkha Janamukti Morcha (GJM) MLA and TMC candidate from the seat.

"Our agenda is development. For the last 10 years, the BJP MPs have done nothing for the people of the Hills," said Rai, who was a staunch Gorkhaland supporter during the 104-day long strike in the Hills in 2017.

He is pitted against Raju Singh Bista of the BJP, formerly of the Gorkha National Liberation Front (GNLF), in the poll fight.

Rai's view was echoed by leaders of the Binay Tamang faction of the GJM. They feel it would be unrealistic to fight for a separate state by ignoring the basic needs.

Senior TMC leader and minister Gautam Deb feels that the statehood demand has caused a lot of bloodshed in the Hills, while development has taken a back seat.

"It's time we keep aside this (statehood) issue and fight for the development of the people of hills," Deb, who represents Dabgram-Phulbari in neighbouring Jalpaiguri district, said.

"For us, statehood is not an issue. We are fighting for restoring democracy in the Hills as it is necessary to fight for a political solution to the Hill problem... The reign of terror of the police and the Binay Tamang group has to end," BJP Darjeeling district president Manoj Dewan told PTI.

Loksang Lama, the working president of Bimal Gurung faction of the GJM, shared similar views. "We want a political solution to the problems in the Hills," he asserted.

Kalyan Dewan, a former vice-president of the GJM and a veteran of Hill politics, said this was the first time in over three decades that both the political parties and the people in the Hills have moved away from the issue of Gorkhaland.

Darjeeling had sent BJP leaders Jaswant Singh and Surinder Singh Ahluwalia to Parliament in 2009 and 2014, respectively.

The TMC, which had vehemently opposed the statehood demand, has also promised basic amenities such as drinking water, electricity, education and employment to the people.

The BJP, which was once sympathetic to the Gorkhaland demand, is stressing on restoration of democracy in the region and the end of the "reign of terror" by the police, which, it alleged, started since the 2017 agitation.

Minimum wages for tea workers and reopening of closed tea gardens are also major poll issues this time, said sources in TMC and BJP, the two main opponents in the battle for supremacy in Darjeeling Hills.

Darjeeling is a picturesque hill town and the area is ethnically dominated by the Gorkhas. The place, known for its world-class tea, is also inhabited by Lepchas, Sherpas, Bhutias among others.

Several political parties had over the years promised the people of the Hills a separate state and implementation of the Sixth Schedule, which grants more autonomy to a region.

The demand for a separate state was first made in the 1980s, with the Subhas Ghisingh-led GNLF launching a violent agitation in 1986, which went on for 43 days and led to the death of 1,200 people in the Hills.

The movement culminated in the formation of the Darjeeling Gorkha Hill Council in 1988, following the intervention of the then prime minister Rajiv Gandhi and the then West Bengal chief minister Jyoti Basu.

The Council administered the hills for 23 years with a certain degree of autonomy.

The separate statehood demand gained momentum yet again in 2007 after the formation of the GJM, under the leadership of Bimal Gurung, who was once a trusted aide of Ghisingh.

In 2011, after the TMC took over the reins of Bengal by defeating the 34-year Left rule, the Gorkhaland Territorial Administration (GTA) was formed with Gurung as its chief.

But peace was short-lived in the area as Gurung led an agitation in support of the statehood demand, first in 2013, and then engineered a 104-day-long strike in 2017, accusing the TMC government of trying to "wipe out" Gorkha identity.

During the agitation, several people including police personnel were killed, which forced Gurung to flee the Hills. He has been on run since then.

The strike also led to a split in the GJM, with Tamang, his deputy, taking over the reins. Gurung and his loyalists were expelled from the party.

Tamang then established himself as the de-facto leader of the Hills with the help of the ruling TMC.

According to GJM sources, who did not wish to be named, the polls this time will actually be a test of strength between the two GJM factions.

"The issue of Gorkhaland has been deliberately kept aside as this time it is a fight between two GJM factions to establish supremacy in the Hills," said a GJM leader.

Polling for Darjeeling Lok Sabha seat will be held on April 18.