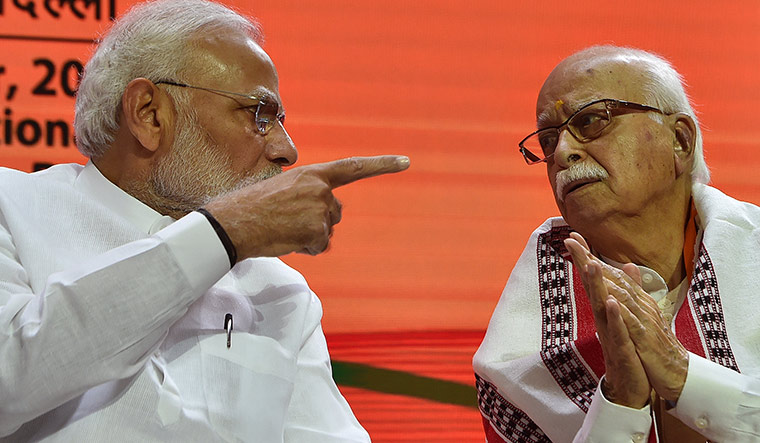 It was in 1991 when Narendra Modi suggested the 'loh purush' (iron man) L.K. Advani to contest from Gandhinagar in Gujarat after the latter completed his nationwide rath yatra in favour of Ram Temple in Ayodhya. Modi even accompanied Advani when he filed his nomination papers.

Now, the 91-year-old BJP stalwart has been bowed out from the election contest. There was suspense over Advani's candidature as the party wanted to field younger leaders.

BJP chief Amit Shah will now contest from Gandhinagar, which also comprises Naranpura assembly constituency which he had represented as an MLA. Interestingly, only one name was announced from Gujarat and thereby sending out a message about who will be Modi's political heir at the national level.

With Advani being ruled out, it would mean an end to his distinguished Lok Sabha career. Seated in the front row, Advani, despite, his advanced age attended parliament everyday.

According to PRS Legislative, his attendance in the outgoing 16th Lok Sabha was 92 per cent, whereas the national average stood at 80 per cent. However, he participated only in one discussion in the last five years.

During his eight terms in Lok Sabha and four in Rajya Sabha, Advani had represented BJP's point of view, being the original Hindutva poster boy. While, Atal Bihari Vajpayee overshadowed everyone with his oratory skills inside the House, Advani was always the strategist in pushing BJP's agenda.

As deputy prime minister and home minister, Advani was instrumental in putting focus on strong action against terrorism.

His last big speech was in 2012, when he spoke on the adjournment motion on Assam violence. He termed UPA II as illegitmate which led to huge reactions from treasury benches. But he was forced to withdraw his remark as he clarified that he reffered to 2008 cash for votes scandal.

Advani had refused to hang up his boots suggesting that he will yet not retire from public life. Whether he will be sent to Rajya Sabha or not, again, Modi and Shah will decide.