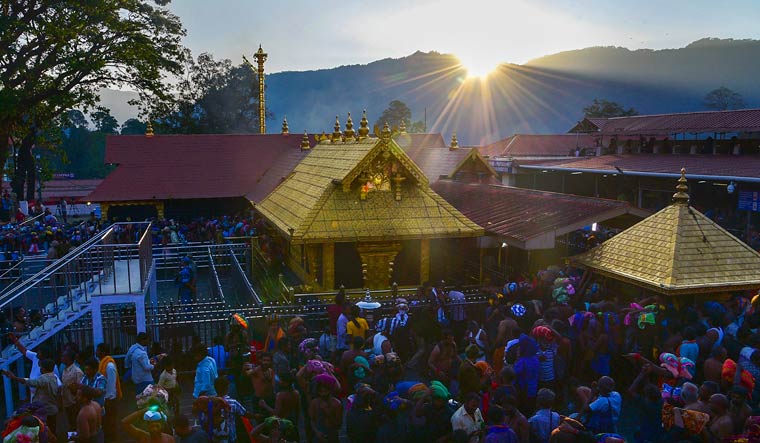 At a time when the issue of women's entry in Sabarimala is expected to be a major poll plank of various political parties in Kerala, the Election Commission has issued a strict warning that the temple's name should not be used in the campaign.

Elections to the 20 Lok Sabha seats in the state will be held on April 23 and the votes will be counted on May 23.

Chief electoral officer in Kerala Tikka Ram Meena said on Monday that the Sabarimala issue cannot be debated in the election campaign.

"I will soon call a meeting of all political parties and this information will be passed on to them. If anyone violates the order, it will be seen as a violation of the model code of conduct and appropriate action will follow," Meena told media.

“Using God to whip up religious sentiments is a violation of the model code of conduct,” he further said.

The hill shrine of Lord Ayyappa in Pathanamthitta district has been in the middle of a major controversy ever since the Supreme Court on September 28 struck down the custom of barring women aged between 10 and 50 from entering the temple premises.

Two women—Kanaka Durga and Bindu—managed to enter the temple on January 2 amid tight security even as the top court reserved its verdict on a batch of review petitions filed against the September 28 verdict.

The saffron party, which has strongly put its weight behind the Sabarimala Karma Samithi—an umbrella body of various Hindu outfits—in its campaign against the state government, hopes to cash in on the issue during the election and open its account in the state.

Both Prime Minister Narendra Modi and BJP president Amit Shah had, during their recent visits to Kerala, lashed out the state government and the CPI(M) for “disregarding the sentiments of Ayyappa devotees”.

Recently, Kummanam Rajasekharan, one of the tallest BJP leaders from the state, had resigned from his post as Mizoram Governor and returned to Kerala to lead party's campaign for general elections. Rajasekharan is likely to contest from high-profile Thiruvananthapuram constituency raising a tough fight to sitting Congress MP Shashi Tharoor.