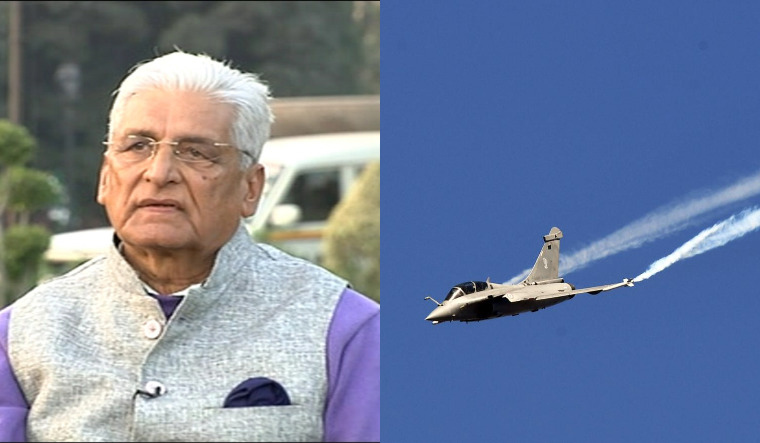 All officers of the Israel Defence Forces, on their commissioning into service, go to an ancient hill fortification called Masada and take a vow: Masada shall not fall again. Masada was the site of the last great siege of the Jewish-Roman war [AD 66-73] which, effectively, marked the end of the kingdom of Israel.

The IDF, created along with modern Israel in 1948, has been able to live up to the vow of Masada because of an unwavering national commitment, placing security above everything else.

India, too, made a vow not to let the 'Himalayan blunder' of 1962 happen again. This vow was renewed 50 years later, alas, with words, but not enough action.

The Indian Air Force is conscious of the dominant role it has to play to avert a repeat of the 1962 military defeat at the hands of China. But the IAF's understanding of its responsibilities serves little purpose if the nation does not give it the support it needs to prevent the inevitable.

It is the responsibility of all Indians to understand that “a repeat of 1962” is not military hype, but an ominous possibility. Political one-upmanship over the Rafale deal and the media’s insensitivity to national security can turn this possibility into a probability. I will not hesitate to call this an anti-national activity.

The government-to-government deal for acquisition of 36 Rafale fighters from Dassault Aviation was a masterstroke. As the Rafale takes to the Indian skies, the IAF's morale will take an upward leap.

The Rafale outranks contemporary fighters—except Lockheed Martin’s F-35—in most parameters of operational capabilities, safety features and ease of operation/ training/ maintenance. The Rafale gives 'bang for the buck', if its entire life cycle performance is considered. If our experience with the Mirage 2000 from the Dassault stable can be a guideline, there should be little doubt about the Rafale’s contractual obligations being proven in performance.

In aviation technology jargon, the IAF's last major acquisition, the Russian-origin Su-30MKI fighter, could be termed as a fourth generation aircraft. The Rafale, on the other hand, could be considered a fighter of the 4.5 to fifth generation. The Rafale is streets ahead of the Su-30MKI with much smaller radar and infra-red signatures, making it harder to detect. Its electronic warfare systems allow for greater ranges of detection and neutralisation of threats. The Rafale offers a substantial increase in radius of action in air-to-air as well as air-to-ground roles, greater weapons load and more wing and fuselage stations (14 in total) to carry weapons and fuel tanks.

The Rafale has multi-sensor 'data fusion', which is the ability to collate and process information from multiple sensors to give the pilot a consolidated air situation 'map'. The data fusion capability is based on the Rafale's RBE-2 radar, front sector optronics (FSO) detection system, the SPECTRA electronic warfare suite and other systems.

SPECTRA provides a terrific enhancement to the IAF's ability to operate in highly 'dense' hostile environments where there is a heavy presence of anti-aircraft radars and weapons. SPECTRA not only allows the Rafale to detect and localise a threat against the aircraft, but also selects the most effective countermeasures against it.

The RBE-2 radar is capable of conducting engagement of beyond-visual-range targets at distances beyond 100km. It is also capable of real-time generation of 2D and 3D maps for ultra low level flying in 'absolute' blind conditions, which is otherwise well nigh impossible. I had seen this capability being demonstrated when I flew a Rafale prototype.

The long-range radar-guided Meteor air-to-air missile, which will arm the Rafale, will give the aircraft air dominance. The Meteor offers unique features such as a two-way datalink—it allows the aircraft to transmit target updates to the weapon after it is fired—and a ramjet propulsion system that enables neutralisation of even very fast-moving targets at very long ranges. The Meteor's 'no escape zone’—zone in which an aircraft cannot rely on mere agility to evade a missile—is thrice that of the current US-made AIM-120 AMRAAM missile.

In addition to weapon systems and sensors, the Rafale will provide the IAF a huge leap forward in ease of maintenance. This includes the capability to replace engines in a matter of hours, as opposed to the couple of days required to do the same for Russian aircraft. The Rafale comes with an integrated logistics support module that allows for monitoring of aircraft 'health' and usage, along with built-in testing facilities.

As it is an easier aircraft to maintain than the Su-30MKI, the Rafale’s downtime is substantially lower; it can launch a greater number of sorties over a uniform period of time. The Rafale's automatic engine control system is highly reliable; it controls engine operation in case of malfunctions or damage in flight.

Armchair pundits claim that buying more Su-30MKI fighters would be a more cost-effective option than buying the Rafale. The Su-30MKI's technology is dated in all parameters. In addition, with respect to failure rates, reliability, sortie-generation capabilities and a host of other performance parameters, the Su-30MKI ranks a poor second to even its predecessor in the IAF, the Mirage 2000. The Rafale is a quantum leap over the Mirage-2000.

Early in the previous decade, just before the deal for the British advanced jet trainer (AJT) Hawk was all but finalised, an emergency meeting headed by the defence minister was called, with a number of bureaucrats, scientists and IAF officers in attendance. The sole objective of the meeting was to scuttle the purchase of the Hawk on the grounds of its 'unjustifiably' high price tag. The scientific adviser to the defence minister made the preposterous claim that his department could design and manufacture an AJT in the time frame the British would take to supply the Hawk. Fortunately, the IAF could call this 'unified' bluff, and the Hawk deal went through.

If India is serious about thwarting Chinese claims to our territory, it should shake off its lethargy in decision making and take corrective action to neutralise the asymmetry in military capabilities. A stiff upper lip in the face of dwindling assets and ageing technology fools not the enemy, but a callous nation bogged down in the mire of its own making.

Converting the initial deal for 36 Rafales to the original IAF requirement for 126 aircraft is the crying need of the hour to counter emerging Chinese capabilities in stealth technology, cruise missiles and airborne early warning systems.

I believe the Rafale would be the clear winner of the IAF's new tender to buy 114 fighters, if value for money, and not lowest bid price, is the main criterion.

As a warrior in mind, if not in uniform, I fervently hope—for the sake of India's safety and economy— that the Rafale will prevail.

(Air chief marshal Anil Yashwant Tipnis served as the 18th chief of the Indian Air Force from 1998 to 2001. It was during his tenure that the IAF undertook combat operations in the Kargil War. He was speaking to Justin Paul George.)