“It's because of Modi that India could prove its strength,” says Shah 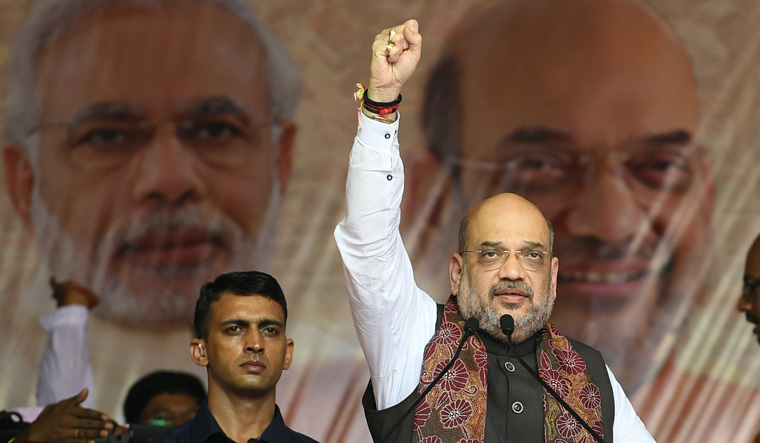 A perfectly timed air strike on terror camps in Pakistan soil has put the ruling Bharatiya Janata Party ahead of the competition in the run-up to the general elections. By taking political ownership of the strikes, Prime Minister Narendra Modi on Tuesday sought to cement his image as a strong leader ahead of the polls. Now, it will be up to his party to take the message to the electorate through its well oiled organisational machinery.

BJP president Amit Shah, while kick-starting the party's "Kamal Jyoti" programme—reaching out to the beneficiaries of various central government schemes—in Uttar Pradesh on Tuesday, stressed the importance of the air strikes.

"A few days back, 40 jawans were killed by terrorists. The country wanted action that could deter them, and our brave IAF pilots struck them hard. I pay my respect to these officers," Shah said.

A dozen Indian Air Force Mirage 2000 war planes conducted a pre-dawn raid on a Jaish-e-Mohammad terror camp at Balakot in Pakistan on Tuesday, days after the terror attack on the CRPF convoy in Pulwama.

The BJP president said it was because of Modi that India could prove its strength. Modi government has shown zero tolerance towards terrorists, he said.

Today the hearts of several families affected by terrorism would have felt some comfort after India conducted the air strikes, Shah said.

Shah had chosen Gaurhat, a faraway village in Gazipur, to light an earthen lamp in the house of a beneficiary of the electrification drive. The BJP chief arrived at the village by boat crossing the Gomti river. Though the village is connected with roads, Shah's gesture was aimed at culturally connecting with the people as they often had to bear the brunt of floods.

Unlike usual political rallies where thousands of people are gathered as a show of strength, “Kamal Jyoti” programme would be a gathering of smaller audience in the areas.

BJP's top leaders and workers will reach out to over 22 crore beneficiaries of central government scheme across the country by lighting lamps. It shows the BJP's strategy of engaging politically with the electorate unlike the previous regimes.

"Gazipur is a land of Havildar Abdul Hameed who lost his life fighting Pakistani army. It's also the land of Raja Suheldev who worked for the upliftment of people,” Shah said. After his speech, Shah went and lighted the lamp at a dalit house.

Shah, in his speech, also highlighted a number of central government schemes and asked people to elect Modi again so that “50 crore poor in the country could be lifted out of poverty”.