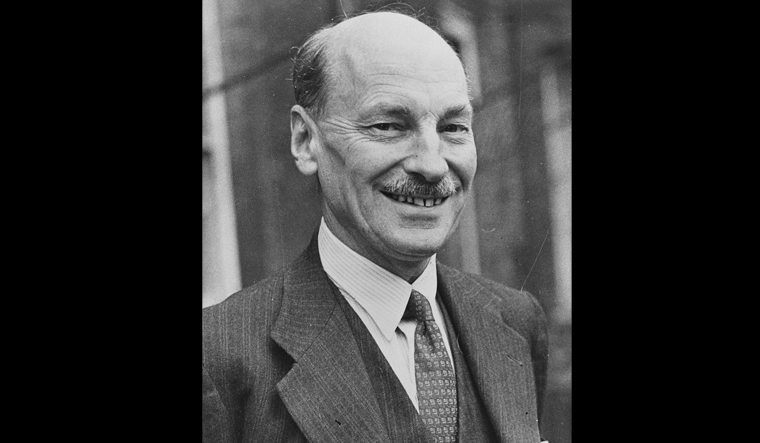 Former British prime minister Clement Attlee told the US ambassador to the UK in June 1947 that he believed Bengal would opt to be an independent state instead of joining either India or Pakistan, according to a media report on Friday.

Dawn said in a report from Washington that historical documents released recently by the US State Department show that the US was the first country that Attlee briefed on his plans to divide India.

On June 2, 1947, the US Ambassador in the UK, Lewis Williams Douglas, sent an "urgent and top secret" telegram to Secretary of State George Marshall, stating that the same afternoon Attlee had called him to his office and shared with him "advance information" about the partition plan.

The next day, Viceroy Louis Mountbatten broadcast the plan to the Indian people while Attlee presented it to the British parliament.

Attlee told Ambassador Douglas he wanted elected representatives from Punjab and Bengal to decide which of the two major dominions these provinces would join.

If they failed to do so, those two provinces would be partitioned between India and Pakistan. Attlee said he thought a division of Punjab is likely, but added that there was a distinct possibility Bengal might decide against partition and against joining either Hindustan or Pakistan.

In that event Bengal might form a separate dominion, an alternative also open to Punjab, but which he thought it improbable that it would elect to do, Attlee told Ambassador Douglas.

The envoy noted that the British prime minister was in sober mood, at times tinged with sorrow while discussing the partition plan with him.

In his own words he has been working on the Indian problem for 21 years and that the viceroy would make one last attempt to secure acceptance of the Cabinet mission's plan.

Failing such acceptance, which Attlee believed most unlikely, the viceroy would lay before Indian leaders a procedure for the partition of India into a Hindustan dominion and a Pakistan dominion.

Attlee told the US ambassador that power might be transferred to Hindustan sometime in August. Pakistan, being without administrative machinery, power transfer to it might be delayed until this was available, the prime minister said.

If India was divided, Attlee told the ambassador, such problems as the partition of gold holdings, army, etc would be carried out by joint commissions of Indians representing the several Indian dominions. The British PM was hopeful that there will be no bloodshed, but feared that there will be.

He told the US ambassador that in its efforts to restore order, the Indian Army would be acting under orders of the interim Indian government's defence minister.

The British prime minister told the US ambassador that he thought opposition in British parliament would not object to appropriate legislation and that it would therefore go through promptly, the Pakistani daily said.

I thanked the prime minister warmly for his courtesy in providing the US with this advance information, courtesy which so far as I know has not been extended to any other power, Ambassador Douglas wrote.

On June 20, 1947, Secretary Marshall sent a telegram to the US embassy in New Delhi, showing that the United States continued to oppose India's partition.

In that telegram, Secretary Marshall referred to a June 19, 1947, dispatch by Reuters news agency, reporting that Karachi had been selected as Pakistan's capital and the US was willing to open an embassy there.

The news agency's report quoted Holdsworth G Minnigerode, US consul at Karachi, as telling its correspondent that the question of establishing an American embassy here is engaging the attention of US authorities.

The Department of State appreciates fact that Minnigerode may have been misquoted, but wishes to avoid a premature indication that the US intends to establish additional diplomatic missions in India or that this question is engaging [attention of] US authorities at this time.

Minnigerode informed the State Department on June 23 from Karachi that the Reuters dispatch was utterly false and that he had limited his June 17 remarks before a delegation of eight journalists to the comment that he had no information on the subject of establishing an American embassy at Karachi and was unable and unauthorised to make any statement.