The party remains adrift without a strong leader. 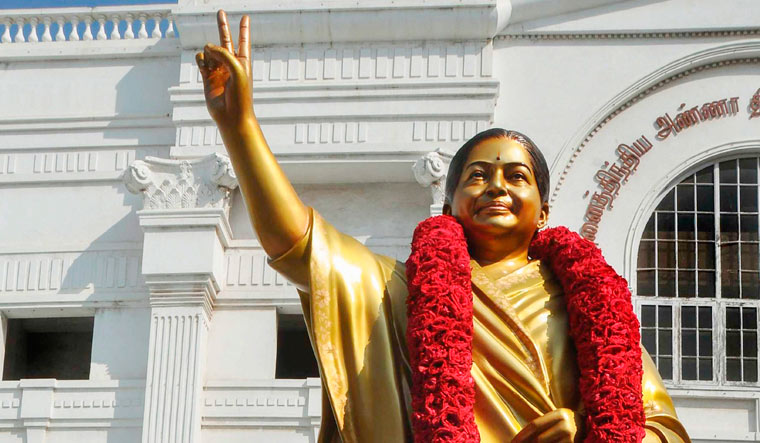 On November 14, when Tamil Nadu Chief Minister Edappadi K. Palaniswami and his deputy O. Panneerselvam unveiled a bronze statue of their leader and former chief minister Jayalalithaa at the AIADMK party headquarters in Chennai, the cadres were awe-inspired. Clad in white dhoties and starched white shirts, the duo along with their cabinet colleagues stood at the feet of the statue, with their hands folded. Days later, on the second death anniversary of Jayalalithaa, the same group of men gathered at her beach side grave. Clad in black shirts they took oath to continue to work in their “amma way” and “sail the party to victory in next elections.”

Minutes later, it was the turn of the AIADMK’s ousted deputy general secretary T.T.V. Dhinakaran and his faction to pay homage at the memorial. Not to miss, the TTV-led faction, too, took oath to lead the party to a victory in the upcoming elections.

Jayalalithaa was a phenomenon. Unlike her mentor M.G. Ramachandran, who drew inspiration from the DMK, Jayalalithaa systematically worked to be the queen of hearts. It was not just the friendship with MGR or her career as his long-time heroine in films that made her a politician she was; she chose and played to work hard to be the epitome of love among women and the people of the state. While MGR led the party to victory and was in power for three consecutive terms, it was under Jayalalithaa that the AIADMK’s vote share grew to over 44 per cent. The party swept the polls in 2014 and saw a second consecutive term in 2016 without an alliance. She was the love for every woman voter in the state; she was considered clean despite the Karnataka court verdict in a disproportionate assets case.

But two years after her death, the party is in shambles. The EPS-OPS duo has managed to be in power but remain unpopular. Recently when Cyclone Gaja washed away the entire delta, the ministers were shown their place. Videos of public chasing the ministers and throwing barbs at them went viral. The chief minister was later forced to survey the cyclone affected region by helicopter to assess the damage. The government also could not manage to get the required funds to rebuild the flood affected delta. “Not just Gaja. The government has failed the people many a time in last two years. They have gone ahead to carry out policies that Jayalalithaa once opposed. Hers was regarded as a clean government. But there are corruption charges against each of our ministers,” says Rajendra Shanmugam, who was part of the AIADMK till a few months ago. Shanmugam, who hails from Thanjavur, has decided to quit politics as the party and the leader whom he always loved do not exist now. For Shanmugam, the AIADMK cannot come back to what it was under Jayalalithaa.

Like Shanmugam, several AIADMK supporters have not renewed their membership during the membership drive held by the party recently. Keeping the flock together is a challenge for both EPS and OPS who want to lead the AIADMK together. When MGR died on December 24, 1987, the party saw a split within 40 days and the government fell. But within a short span of two years, Jayalalithaa proved to be a successful political heir of MGR and got the flock together. All MGR loyalists, who earlier chose his wife Janaki, came back to support Jayalalithaa. Within two years after the fall, Jayalalithaa led the party to a massive victory.

“Contrary to the public perception that the government will fall within three to four months after the death of Jayalalithaa, to everyone’s surprise it has pulled on. When everyone expected the fall of the government like in 1987, this time it has thrived on, but it lacks a qualitative leader like MGR or Jayalalithaa. Given the background and the style of the AIADMK which has thrived on individual personalities and autocracy since its inception, it now lacks a strong leader. OPS and EPS each other know they cannot prove successful. Their weakness of lacking the capability of a leader has turned into their strength,” says R. Ramasubramanian, a senior journalist and political analyst.

After Jayalalithaa's death, the government has survived, but the party remains adrift and visionless without a strong leader. Nevertheless, the EPS-OPS duo have come together to lead the state, but the AIADMK is not the same under Jayalalithaa. The party is seized of a general secretary for two years now. The general secretary election and the party bylaw amendment are still pending in the court. The two-leaves symbol is back, but TTV remains a thorn in the flesh for the ruling faction. TTV won the bypoll to RK Nagar constituency, previously held by Jayalalithaa, last December by more than 40,000 votes. While the FERA cases and the two-leaves symbol bribery case are hanging like a Sword of Damocles for Dhinakaran, he has been riding high on the RK Nagar victory and expanding his base in the southern districts. “Bulk of the AIADMK cadres are with AMMK,” Dhinakaran repeats at every public meeting he addresses. While OPS and EPS, as the coordinator and the joint coordinator of the AIADMK, have expelled over 3,000 members who owed allegiance to TTV, the party's membership seems to have dropped steadily from the “1.5 crore cadres” that Jayalalithaa would tout at every public meeting.

“Let the government face its consequences. We want the AIADMK to be revived and we are sure that our Amma’s spirit will guide us,” says yet another AIADMK rebel K.C. Palanisamy, in a video circulated to the party cadres. Palanisamy has gone to the court to restore the basic ideology of the party and have a general secretary elected by the primary members of the party, like during the reign of Jayalalithaa and MGR.

As Jayalalithaa’s new golden hue stands high at the party head quarters with an eternal smile on her aureate face, it remains to be seen if the men who stood at her feet with their hands folded can sport the same smile on their faces. “The government continues to be in power. But only an electoral victory can determine if the AIADMK is as strong as it was under Jayalalithaa. EPS and OPS together have now managed to run the government, but they are not leaders, but were cadres under Jayalalithaa,” says political analyst Tharasu Shyam.