Congress has problem of plenty in Chhattisgarh with CM aspirants 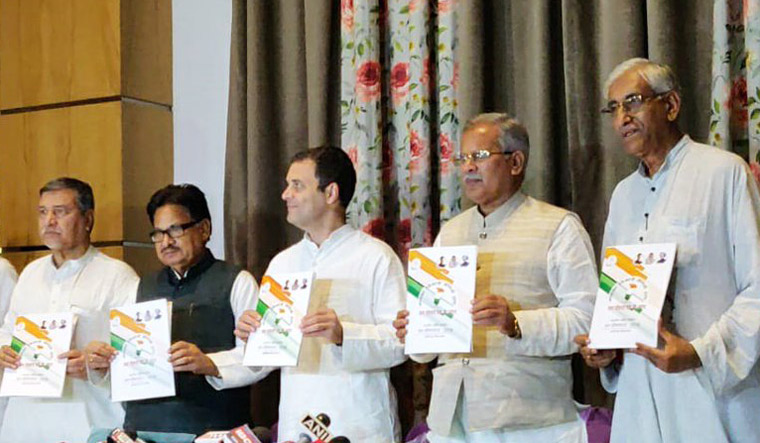 Two years ago, when Ajit Jogi quit the Congress to form his own political outfit in Chhattisgarh, the grand old party of India was left with too many “equals” vying to become its chief ministerial candidate. Among these equals who are eyeing the topmost slot are state Congress chief Bhupesh Baghel, leader of opposition T.S. Singh Deo, former Union minister Charandas Mahant, AICC OBC cell chairman Tamradhwaj Sahu and former state minister Satyanarayan Sharma.

However, during his three-year term as chief minister from November 2000 to November 2003, Jogi and the Congress became so unpopular that the party would be kept out of power for a full 15 years. During these elections, the Congress is hoping to return to power, but it faces the big question of who will be the chief minister.

The Congress in Chhattisgarh has faced rough times with respect to leadership ever since the state was created in November 2000. First, it was during the 2003 polls that veteran Vidyacharan Shukla, angry with the party high command, fought assembly polls against the party by joining the NCP and dashing the hopes of the Congress to retain power. Shukla divided the votes of the Congress and facilitated the way for a BJP victory.

In July 2013, the entire top leadership of the Congress party in Chhattisgarh was wiped out when over a dozen leaders including state president Nandkumar Patel, leader of opposition Mahendra Karma, Vidayacharan Shukla and MLA Uday Mudaliyar were killed by Naxalites in a brutal ambush when they were returning from Sukma in south Bastar after addressing a public rally.

Nandkumar Patel, an OBC leader from Raigarh region, and Mahendra Karma, a powerful tribal leader from Bastar, were strong contenders for the post of the Congress's chief ministerial candidate. However, their killing left a huge vacuum in the party.

In order to fill the vacuum, the Congress high command promoted backward caste leader Bhupesh Baghel, who was a minister in the Digvijaya Singh cabinet in Madhya Pradesh before 2000. A relatively young Baghel toured the state on foot and tried to revive the organisation of the Congress, but his style of functioning, which was perceived to be haughty, could not make him a leader acceptable to the faction-ridden state unit.

It was at this time that leader of opposition and scion of Sarguja royal family T.S. Singh Deo tried to fill the gap through his amicable behaviour. Though Singh Deo, an upper caste Thakur, is the suave and polished face of the Congress inside the state assembly and outside, he also had faced controversies. Singh Deo had been accused of going soft on Chief Minister Raman Singh of the BJP; his business ties to controversial corporates have also not endeared him to the masses.

The two other important OBC leaders among the top state leadership are Charandas Mahant and Tamradhwaj Sahu. Mahant was a minister is the Digvijaya Singh cabinet between 1993 to 1998 and later he was made a minister of state in the Manmohan Singh government. Mahant was even made Chhattisgarh PCC president in 2008, but the party lost the polls under his leadership. According to party insiders, Tamradhwaj Sahu, an influential leader of the backward Sahu community, is known to be a Man Friday for Congress president Rahul Gandhi.

Sahu is member of Parliament from Durg Lok Sabha seat and heads the OBC cell of the Congress. He was systematically promoted in the state and national politics after P.L. Punia was made in-charge general secretary and had differences with the state PCC chief. Chhattisgarh has 10 assembly seats reserved for scheduled castes with a population of 12 per cent. It has 34 per cent Adivasi population with 29 seats reserved for scheduled tribes while over 50 per cent of the population belongs to Other Backward Classes.