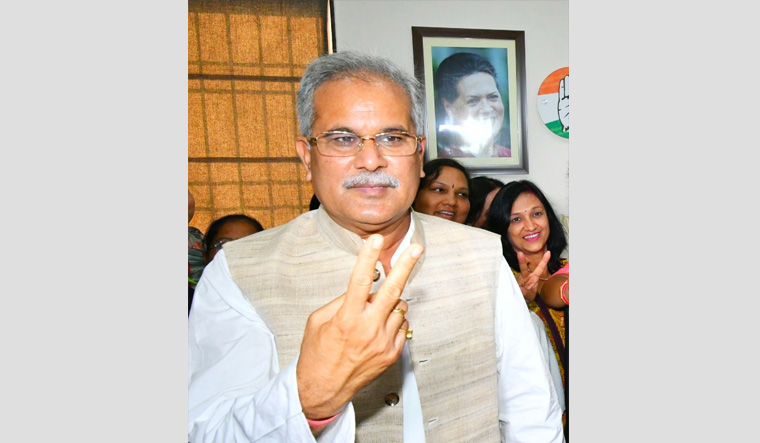 One may say that Chhattisgarh Chief Minister Bhupesh Baghel was the giant killer in the recently concluded assembly elections. The Congress led by him unseated the 15-year-old Raman Singh government in Chhattisgarh in a landslide victory, in what came as a surprise even for the winning party.

Undoubtedly, it was the huge victory—Congress won 68 of the 90 seats in Chhattisgarh—that made a strong case for Baghel's chief minister's crown. However, going into the polls, Baghel's image had suffered a huge setback, courtesy the "sex CD" episode last year. It was no secret that the Congress's central leadership was reluctant to consider Baghel's candidature for chief ministership in the state after the "sex CD" scandal became murkier in Chhattisgarh politics, damaging the party's image in a crucial year.

While Verma was appointed political advisor to Baghel, another journalist Ruchir Garg, who quit as an editor of a Hindi daily and joined the Congress ahead of the just concluded assembly polls, was named media advisor to the Congress chief minister.

Verma, a close confident of Baghel, was arrested from Ghaziabad in October 2017 by the Raipur police after a case of blackmailing and extortion was registered at the Pandri Police Station on a complaint by Bharatiya Janata Party (BJP) leader Prakash Bajaj.

Bajaj had alleged that he was "being harassed over phone by an unidentified caller", who told him he had a CD of his "aaka" (master).

The police had claimed to have recovered 500 CDs and some pen drives from Vermas residence during a raid.

After Verma's arrest, a "sex CD", purportedly featuring the then PWD Minister Rajesh Munat, had surfaced in Raipur.

Munat had termed the CD as "fake" and alleged it was made and circulated to tarnish his image. He had later filed a complaint against Baghel, the then state Congress president.

Verma was released on bail in December last year after the police failed to file a charge-sheet against him in the mandatory 60 days.

In September this year, the CBI had filed the charge-sheet in a special court in Raipur in the case, naming Baghel, Verma and three others as accused.

During the investigation, one more accused, Rinku Khanuja, had allegedly committed suicide in June this year.

All the accused were booked under IPC sections 469 (forgery for purpose of harming reputation), 471 (using as genuine a forged document), 120B (criminal conspiracy) and 67A of the IT Act (whoever publishes or transmits or causes to be published or transmitted in the electronic form any material which contains sexually explicit act), according to the charge-sheet.

Verma and Baghel had denied any involvement in the preparation or circulation of the CD.

Baghel had initially refused to apply for bail and stayed in judicial custody for a couple of days.

The Congress leader, who had said he was falsely implicated in the case, later obtained bail from the court.