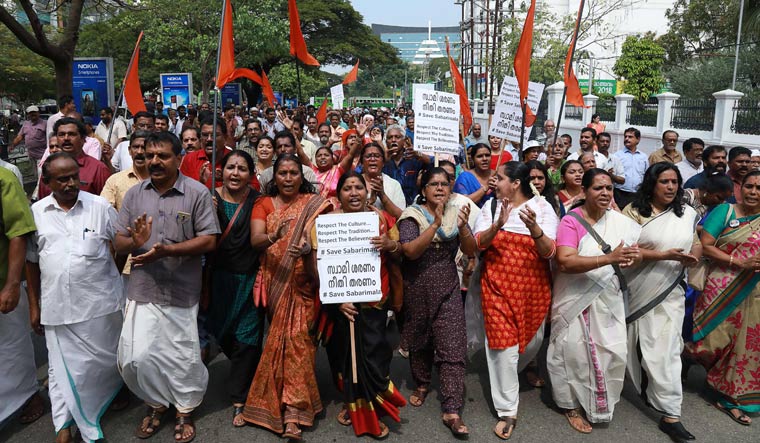 The 13th session of the Kerala Assembly, which begins on Tuesday, could perhaps snatch from the BJP the political advantage it had so aggressively, at times even crudely, sought to amass with the Sabarimala issue.

The Congress, at least during the next fortnight when the session will be on, will get back to being the state's principal opposition party. With just a lone member, that too a soft-spoken and ageing O. Rajagopal, the BJP cannot hope to make much of a flutter inside the Assembly. And now, for the first time after an earnestly devout Swamiye Saranam Ayyappa call had turned into a war cry of sorts, the Congress is in a position to re-frame the Sabarimala debate.

The Congress as the victim

The crux of the Congress argument would be that the ruling CPI(M), with the sole intention of wiping out the Congress, is allowing the BJP to thrive on the Sabarimala issue. The party's speakers in the Assembly have been told to articulate that the Pinarayi Vijayan government's actions were not just foolish but diabolically intentional.

To elaborate, they would point out the police action at Sabarimala, the arrests of leaders of the BJP and other rightwing groups, and also the aborted attempt by the police to escort “activists” to Sabarimala. All these, it would be argued, had distanced the faithful from the Vijayan government, glorified aggressive rightwing leaders, and made it easy for the Sangh Parivar to hawk its communal agenda in the state with no inhibitions whatsoever.

Simultaneously, the Congress will attempt to expose the administrative failures of the Vijayan government at Sabarimala, especially the lack of basic pilgrim amenities. This again would be painted as another deliberate move by the CPI(M) government to undermine the sanctity of Sabarimala. The reduced flow of devotees will be held up as proof of this. Young articulate Congress leaders like V.D. Satheesan, V.T. Balram and Shafi Parambil, who had till now kept a low profile, have been asked to go all out.

MLAs with extreme positions like K. Muraleedharan have been asked to keep their arguments moderate. The Congress wants to position itself as a sane alternative to the BJP on the Sabarimala issue. It helps that a firebrand like K. Sudhakaran is not an MLA.

To Ayodhya via Sabarimala

In fact, the Kerala Assembly session could not have come at a more inopportune moment for the BJP. This was perhaps the only chance to transfer the religious fervour of the Ayodhya issue to the state by proxy.

With the 26th anniversary of the Babri Masjid demolition coming up on December 6, the Sangh Parivar has decided at the national level to amplify its calls for a temple in Ayodhya. The Hindu community in Kerala has never had an emotional connect with the Ram Mandir issue.

But in Sabarimala, the Sangh Parivar has found just the right means, at least they perceive so, to mobilise a hitherto largely secular Hindu community in the state on religious lines. Therefore, this was seen as the most auspicious time to raise the religious frequency of the Keralite Hindu to the level of his counterparts in Sangh Parivar strongholds like Uttar Pradesh.

Unfortunately, for the Sangh Parivar, on December 6, the action will be concentrated in the Assembly. The Congress will also make sure that the BJP is in no position to exploit the anniversary of the Babri Masjid demolition.

The BJP's strategy to keep instigating newsworthy happenings at Sabarimala to eclipse what is happening in the Assembly, too, will not work out. National BJP leaders, including Central ministers, are expected to reach Sabarimala only after December 11. Already, with women keeping away, the BJP's political campaign has lost its fizz.

Though the Congress will seek to redraw the battle lines at Sabarimala, the party would be more happy if the issue is consigned to oblivion. So party strategists want post-flood activities to get more prominence in the Assembly.

“The Sabarimala issue has allowed the government to get away with its failures, especially its criminally poor post-disaster reconstruction work. We want this Assembly session to be more about life after floods than Sabarimala,” a top Congress leader said.

The UDF knows that there is an even more aggressive and effective way to put the Sabarimala controversy to rest. Stage as many walkouts on the issue of the alleged nepotism of Minister K.T. Jaleel. Eventually, if the minister is forced to resign, the UDF and the Congress would have effectively reclaimed the opposition space.