'An election gimmick', 'a treason': Congress reacts to Statue of Unity 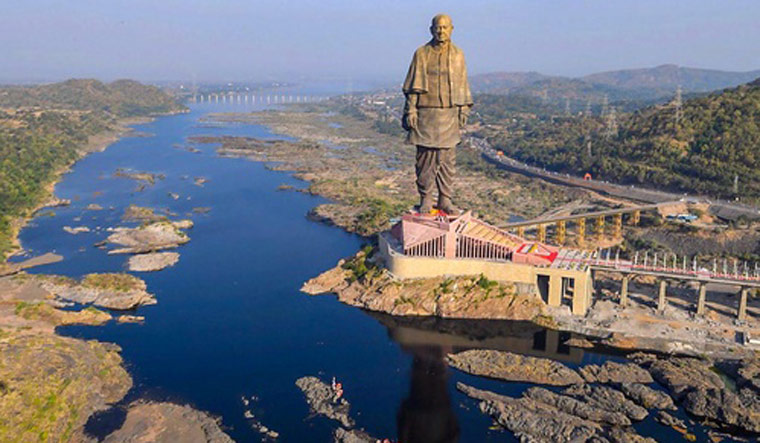 A view of Statue of Unity | PTI

On the day the 182-metre statue of Sardar Vallabhbhai Patel was inaugurated by Prime Minister Narendra Modi in Narmada district of Gujarat, the Congress came down heavily on the BJP, the Union government and the RSS and said the entire exercise was a mere “election gimmick” and a “treason”.

Congress president Rahul Gandhi took to Twitter to slam the BJP. "Ironic that a statue of Sardar Patel is being inaugurated, but every institution he helped build is being smashed. The systematic destruction of India's institutions is nothing short of treason," he tweeted.

Pointing out that there was no such gigantic statue of Mahatma Gandhi in the country, Congress leader Shashi Tharoor questioned why the saffron party has built a bigger statue for the father of the nation. "I am asking a question...Is it right to erect such an imposing statue of Patel, a man of simplicity and a true Gandhian, who moved along with poor peasants," he said.

He also alleged that BJP was trying to "hijack" the legacy of freedom fighters and national heroes like Patel as they have no leaders of their own to celebrate. "Patel had worked along with Gandhiji and strengthened the Congress party. We should remember him always," Tharoor said.

Congress leader in the Lok Sabha Mallikarjun Kharge too took on the BJP for using the statue of Sardar Vallabhbhai Patel for their "vested interests," and said the party remembering Patel is merely an election gimmick. "Every year, the BJP remembers a different freedom fighter. Sometimes they remember Patel, sometimes Gandhi for Swachch Bharat Abhiyan and sometimes they remember Dr B. R. Ambedkar and Subhas Chandra Bose. These are all their election stunts. They never had respect for those who fought for the freedom of India," he said. Kharge further claimed that 15-20 years ago the BJP offices never had photos of Sardar Patel and Bose.

Meanwhile, BSP president Mayawati demanded an apology from those who had flayed her over the statues of dalit leaders her government had installed in Uttar Pradesh. "All those in the BJP, the RSS and company need to apologise, especially to the people of the Bahujan Samaj, for terming the statues installed by the then BSP government to honour icons like Baba Saheb Ambedkar and others as wasteful expenditure," she said.