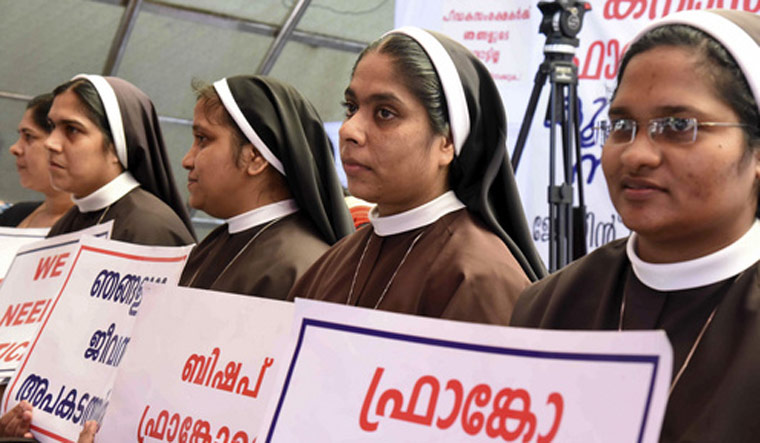 Even as Jalandhar Bishop Franco Mulakkal, accused of rape by a nun in Kerala, has "handed over" charge of his duties and responsibilities to fellow priests on Saturday, a group of Catholic priests joined the protesting nuns in Kerala.

As the protest by the nuns in support of the rape survivor, aided by various Catholic reformation organisations, entered eighth day Saturday, a group of Catholic priests visited them, defying the stand taken by Kerala Catholic Bishop Council (KCBC), a powerful Bishop body. The KCBC had slammed the nuns' protest, saying that it has "crossed all limits".

KCBC had claimed that people with vested interests and a section of the media are trying to tarnish the image of church and the bishop community as a whole by backing the nuns who have taken on to the streets and said that this was "not acceptable."

Defying the KCBC, the group of priests belonging to the Ernakulam-Angamaly Archdiocese of the Syro-Malabar Church visited the protest venue and assured their moral support to the nuns seeking justice in the case.

"We are not here to judge anyone. We wish to see the Church delivering justice to the nuns," one of the priests told the reporters.

Meanwhile, the Vatican, the highest authority of the Catholic Church, has reportedly constituted a one-member panel to investigate the allegations against the bishop. Reports suggest that the accusations against Bishop Franco Mulakkal was brought to the notice of the Vatican after Cardinal Oswald Gracias, Archbishop of Bombay and president of the Catholic Bishops' Conference of India, met Cardinal Fernando Filoni, the head of the Vatican’s Congregation for the Evangelization of Peoples. It is speculated that this has resulted in the hesitant bishop transferring his responsibilities to the priests.

The nun had recently sought urgent intervention of the Vatican for justice and demanded the bishop's removal as the head of the Jalandhar diocese, questioning why the church was "closing its eyes to the truth" when she had mustered courage to make public her suffering. She further said the bishop was using "political and money power" to "bury" the case against him.

Meanwhile, the Kerala police has decided to issue notice to authorities of Jalandhar-based congregation, Missionaries of Jesus, for allegedly flouting the anti-rape law by putting out the photograph of the victim in a press release issued by it Friday.

The congregation had put out the photograph in the release issued to the media to publish the findings of its enquiry commission, which looked into the nun's allegations.