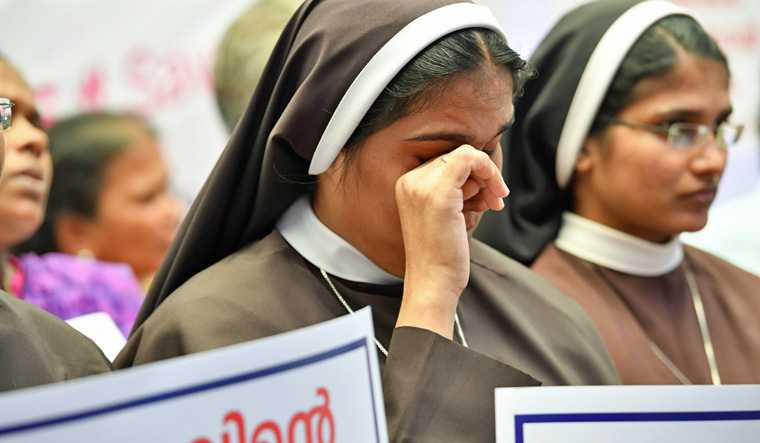 The nuns staging an agitation in Kochi, seeking action against rape accused Roman Catholic Bishop Franco Mulakkal, have rubbished allegations of conspiracy against the Church and external influence behind their protest.

Sister Anupama, one of the agitating nuns, on Thursday told Manorama News that the nuns would continue the protest until their colleague, the nun who levelled the rape charges against the bishop, is served justice. She said they resorted to the strike after being denied justice by the Church.

The reaction came a day after the Missionaries of Jesus congregation, to which the victim belongs, ordered an inquiry against the nuns staging a protest. The congregation alleged that the protest was sponsored by external forces. It also sought a probe into the source of money used for the protest.

The police have handed over a report on the progress of the probe to the director general of prosecution. Franco Mulakkal has been summoned to Kerala for questioning on September 19.

Announcing the decision to summon the clergyman after a meeting where the probe in the case was reviewed, Inspector General of Police Vijay Sakhare on Wednesday said the delay in completing the investigation was due to "contradictions" in the statements given by the victim, the witnesses and the accused.

Sakhare said a decision on arresting the bishop could be taken only after corroborating the statements.

The protest by various Catholic Reform organisations and the nuns in Kochi seeking justice for the victim entered the sixth day on Thursday. Leaders of the Mahila Congress, BJP and various rights organisations have expressed solidarity with the protesters.

The Kerala government made it clear that it stood with the protesting nuns and there was no need for them to be anxious, reiterating that the investigation was going on in the "right direction".

The Kerala Catholic Bishop Council (KCBC), however, slammed the protests as having "crossed all limits", while noting both the complainant nun and accused bishop were members of Catholic family and the church shared their "wounds and agony".

The complainant nun recently sought urgent intervention of the Vatican for justice and demanded the bishop's removal as the head of the Jalandhar diocese, questioning why the church was "closing its eyes to the truth" when she mustered courage to make public her suffering.

The nun had accused the clergyman of sexually assaulting her repeatedly between 2014 and 2016. The bishop, however, dismissed the allegations as "baseless and concocted", insisting she levelled the charges as the Catholic order had rejected her demand for favours.