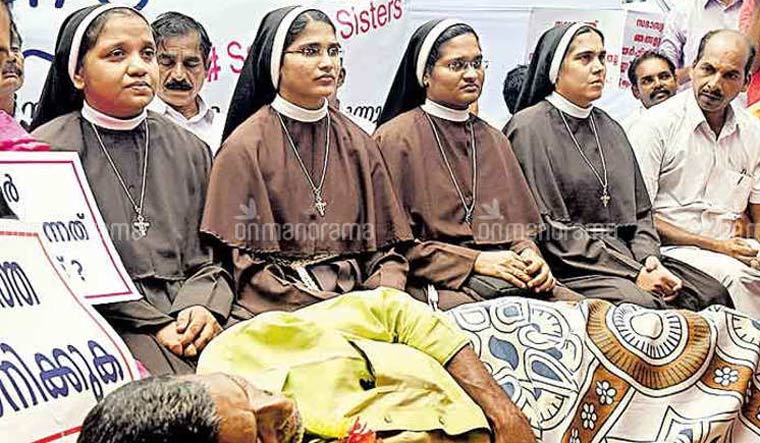 The Congregation of Mother of Carmel (CMC) of Kerala’s Syro-Malabar Catholic Church has directed its members not to cooperate with or react to an ongoing protest by five nuns against bishop Franco Mulakkal accused of raping their colleague.

The CMC issued a circular on the matter in the wake of growing support to the Kochi demonstration by five sisters against Jalandhar bishop Franco Mulakkal, who allegedly raped a nun at their convent in Kuravilangad, Kottayam. The 44-year-old nun had complained that the bishop committed the crime 13 times between 2014 and 2016. The Kerala police have launched a probe.

The agitation, seeking punishment for Franco Mulakkal entered day five on Wednesday, as Stephen Mathew, a key functionary of an action council on the matter, continued his fast in front of the High Court in the city.

The 54-year-old bishop, on his part, maintained that the stir is being spearheaded by anti-Church activists. Claiming that their basic idea was to blackmail him, Franco Mulakkal said he was “completely cooperating” with the investigation.

The nuns, however, denied the charge against them, saying they were fighting for justice. It is wrong to insult a rape victim, said Sisters C. Anupama, Josephine, Neena Jose and Alphy of the Missionaries of Jesus.

Will the bishop be arrested?

The police had earlier this week completed a second round of investigation, which found inconsistencies in the statements of both the bishop and the nun who accused him. The police has asked Franco Mulakkal to appear before the investigating team on September 19, Inspector General of Police Vijay Sakhare said, reports PTI.

The initial round of the probe under Vaikom DySP K Subhash had recorded statements of the bishop, nun and a cardinal among a total of 12 people. Besides, the investigators will examine the register book at the nunnery and relevant medical records. The court had recently sought to know the action taken on the basis of the nun’s complaint. A reply to this is expected on Thursday when the court resumes hearing in the case.