Karunanidhi: A blind champion of the Lankan Tamil cause 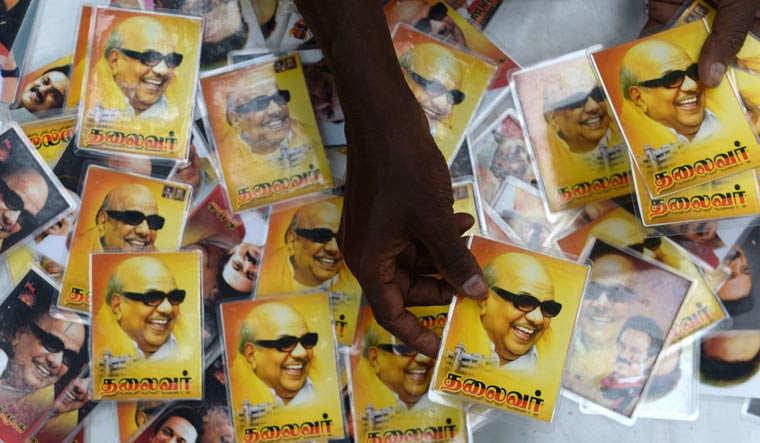 A vendor displays portraits of DMK party president M. Karunanidhi in front of the Kauvery Hospital where he was being treated | AFP

Veteran Dravidian leader Muthuvel Karunanidhi was hailed as the champion of the cause of Tamils the world over. As a result, he allowed his emotions to cloud his judgment on the Sri Lankan Tamils’ struggle for an independent Eelam.

Another reason for his flawed judgment was his competitive politics with his friend-turned-foe and three-time chief minister of Tamil Nadu and matinee idol M.G. Ramachandran.

So, he made the mistake of identifying the Tamil cause with the armed struggle of Liberation Tigers of Tamil Eelam (LTTE) led by Velupillai Prabhakaran even after he turned the gun on the Indian soldiers sent by Rajiv Gandhi to enforce a peace agreement he signed with the Sri Lankan President J.R. Jayewardene—an unenforceable agreement opposed not only by the Tamils but also the majority Sinhala.

There were several critics of Rajiv Gandhi’s military misadventure. But no one criticised individual soldiers being dragged into a thankless, unwinnable war as Karunanidhi did when he refused to receive the last contingent of the IPKF which was sent packing by then President R. Premadasa after reaching a compact with the Tigers in 1989. Swallowing the LTTE propaganda, Karunanidhi said he could not receive an army that “killed thousands of innocent Tamils and raped Tamil women”.

So outrageous was this statement that a senior army officer of the IPKF, himself a Tamil, wanted to resign and go public against Karunanidhi, but was prevailed upon by his superiors not to do so.

Karunanidhi had been involved in the Tamils’ struggle for equal status with the majority Sinhalese since the 1960s. When the periodic anti-Tamil riots peaked in a pogram in July 1983 that made lakhs of Tamils flee to seek refuge in Tamil Nadu and the world over, there was an outpouring of sympathy for the Tamils. And Karunanidhi resigned his MLA post to press for Indian intervention to bring about an independent Eelam in Sri Lanka the way Indira Gandhi bifurcated Pakistan to create Bangladesh.

The parallel was flawed. Because the Pakistan establishment refused to recognise Mujibur Rahman who was elected by the East Pakistan people. But the elected representative of Tamils, Appapillai Amirthalingam, was denounced by the LTTE and other groups as a man who betrayed the mandate. As a result, Indira Gandhi had no one to hand over power to if at all she created an independent Eelam. Further, she had a strategic interest in dividing Pakistan. There was no such interest in bifurcation of Sri Lanka.

These niceties were lost on Karunanidhi. Thanks to Indira Gandhi’s strategy of arming and training the Tamil militant groups and using them as cat’s paw to coerce the Jayewardene regime to negotiate a settlement with the Tamil United Liberation Front (TULF), all the groups were in Tamil Nadu. While MGR backed Prabhakaran, Karunanidhi backed Tamil Eelam Organisation (TELO) leader Sri Sabaratnam. Prabhakaran eliminated Sabaratnam in Jaffna even as Karunanidhi called a conference of Tamil Eelam Supporters Organisation in Madurai in 1986.When Karunanidhi raised a purse, Prabhakaran refused to accept it for fear of offending MGR.

When the war between the LTTE and the Sri Lankan army peaked in 1987, MGR as chief minister presented Rs 4 crore—tax payers money—to fund Prabhakaran’s war efforts. When the army was about to capture Jaffna, India intervened. Prabhakaran refused to accept the Rajiv-Jayewardene peace agreement, and took up arms against the IPKF and succeeded in getting it out of the island two years later by making peace with President Premadasa. When the Indian army left, along with it came supporters of the peace agreement like North-East Chief Minister Varadarajan Perumal in 1989. Karunanidhi, as chief minister, got the ship diverted to Orissa on the grounds that the anti-LTTE groups’ arrival would bring their internecine feud to Tamil Nadu.

He allowed the LTTE to smuggle fuel and medicines besides explosives to Jaffna. He allowed the Tigers to kill rival EPRLF leader Pathmanabhan in Chennai and get away. His inaction eventually led to the dismissal of his ministry in January 1991 by the Chandrasekhar government. And the LTTE gave post-facto justification for the dismissal by killing Rajiv Gandhi on Tamil Nadu soil on May 21, 1991, in the run up to the elections.

When the LTTE and the Sri Lankan army were engaged in the final battle in 2009, Karunanidhi could not persuade the UPA government in which his DMK was very much a part, to intervene. He resorted to a fast but it yielded no result. India, having decided to dump LTTE as it could pose a threat to nuclear installations in Tamil Nadu, was unmoved by Karunanidhi’s theatrics.

In the final analysis, Karunanidhi loved the Sri Lankan Tamils, but not wisely. The irony, however, is that LTTE had no great love for Karunanidhi.