PM Modi kickstarts BJP's final showdown ahead of May 12 elections 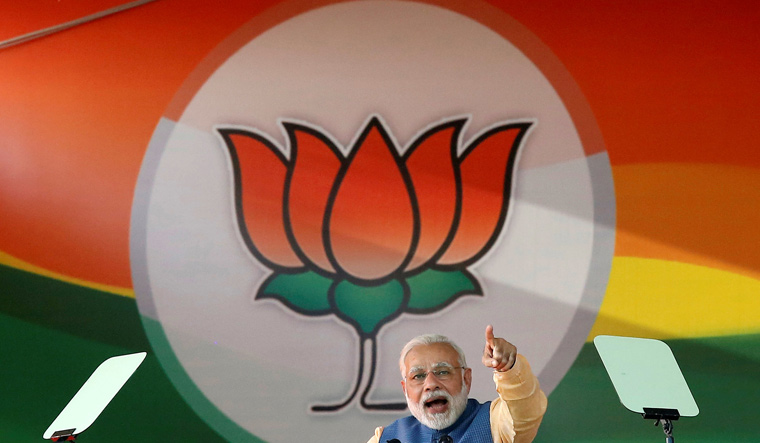 Prime Minister Narendra Modi on Tuesday launched a direct attack on Karnataka Chief Minister Siddaramaiah by mocking his decision to contest from two seats—Chamundeshwari in Mysuru and Badami in Bagalkot district in the May 12 polls.

“Fear of defeat has sent the chief minister scouting for a safe seat. Karnataka has a 2+1 formula, where the CM is contesting from two constituencies. That is not all. He has sacrificed his son by fielding him from the constituency (Varuna), previously held by the CM. This shows his family's desperation to hold on to power. If the CM has 2+1 formula, the ministers have a 1+1 formula as two people from the same family have got tickets. This is the Karnataka version of family politics practised by the Congress party. This is a political innovation of a chief minister who is mostly found sleeping. I know it has deeply hurt the Congress partyworkers. But the naamdaars (famous) don't understand the pains of kaamdaar (working class),” charged Modi, who landed in Chamrajnagar district on Tuesday, to steer forward his party on its last leg of the election campaign.

On the contrary, the saffron party has denied a ticket to B.S. Yeddyurappa's younger son B.Y. Vijayendra to contest from Varuna, in the last minute, amid violent protests from the partyworkers.

Earlier, Modi stated that AICC president Rahul Gandhi had challenged him saying he (Modi) could not sit in the Parliament if he gave a 15-minute speech. Daring Rahul to give an impromptu 15-minute speech in Karnataka, Modi said, “Rahul may choose any language of his choice, including his mother tongue, and list down the achievements of the Congress government in Karnaaka. He must attempt to mention the name of Sir M. Visvesvaraya at least five times, to prove to the people of Karnataka that he is capable,” mocked Modi, referring to Rahul's faux pas in pronouncing the stalwart's name during a rally.

“You are a “naamdaar” (famous) and we, kaamdaars have no status to sit in front of you. I am not hurt when you say such things, because workers like us have endured such excesses for a long time. In fact, we can't even wear good clothes,” added Modi.

Modi asked the Congress leaders to stop insulting the hardworking workers who carried transformers and electric poles on their shoulders to remote areas and tough terrains to help the country achieve 100 per cent electrification of villages. “I expected them to speak a few words of appreciation to the working classes,” he said.

Modi, who said he could see a pro-BJP storm and not just a wave in Karnataka, warned the people of Karnataka against the Congress party saying, “Family politics has destroyed the society, country and democracy. Now, people's politics will fight the family politics. Every one associated with the Congress government has a saga of corruption. In Karnataka there is no law, there is no order. (If) The Lokayukta is not safe, how can the common people be safe. People have understood it is the 10 per cent commission sarkar that is ruining the state. By voting for the BJP, you can change the future of Karnataka."

Modi will be addressing as many as 20 rallies across five days, in the final showdown before the state goes to polls on May 12.