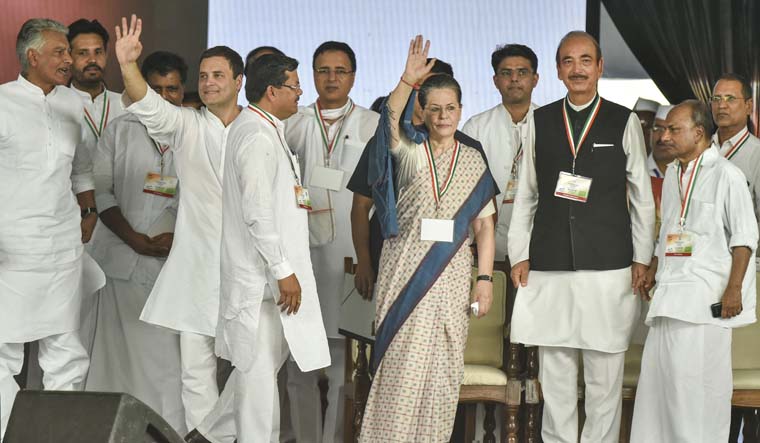 Congress president Rahul Gandhi sounded the poll bugle for the coming round of elections, culminating in the 2019 Lok Sabha polls, launching a blistering attack on the Narendra Modi government, targeting it on issues of unemployment, farmers' woes, corruption, and accusing it of practising divisive politics.

Addressing a 'Jan Aakrosh' rally, held at the historic Ramlila Maidan in the national capital, Rahul laid down the blueprint for the party's attack on the Modi government and the BJP in the run-up to election season, planking it on the perceived anger and frustration among the people.

The Congress leader claimed there was widespread anger and hurt amongst the people of the country. He said there was outrage over Modi promising two crore jobs, but failing to deliver. “In the last four years, forget about generating employment. Modiji has destroyed the informal sector and broken the back of small shopkeepers with Gabbar Singh Tax (GST) and demonetisation. The youth now looks at Modiji and says that there is no weight in his words,” he said.

Rahul accused the Modi government of being callous towards the problems faced by farmers. “The prime minister took away the bonus due to the farmers. He does not increase the MSP. And then he talks of being pro-farmer,” he said, also accusing Modi of not being responsive to the demands for a waiver of farm loans.

The Congress president further said: “Had the Congress party not stood up for the farmer, Modiji would have snatched the land of all farmers.”

He said that the people felt cheated by Modi. “Ours is a religious country. When people go the temple or mosque or church, they fold their hands and bow their heads before truth... However, when the country listens to Modiji's speech, they have to look for truth,” he said.

Taking on Modi on the issue of corruption, Rahul said the prime minister stood exposed after having failed to live up to his pledge of the country's 'chowkidaar'. “Modiji goes to Karnataka and talks about fighting corruption even as he is sharing the stage with Yeddyuraa, the chief ministerial candidate of the BJP, who has gone to jail,” Rahul said. He went on to cite the instances of bank scam accused Nirav Modi and alleged corruption in the purchase of Rafale fighter jets from France. He also mentioned the allegations of corruption levelled against Union Minister Piyush Goyal and BJP president Amit Shah's son Jay Shah.

Rahul also accused the Modi government of weakening Constitutional institutions such as the judiciary and the Election Commission. “For the first time in 70 years, Supreme Court judges came before the public with folded hands, seeking justice for them. Modiji did not utter a word on it. The Supreme Court judges took the name of Justice Loya. They said the court was under pressure. Modiji kept quiet,” he said.

He charged the ruling dispensation with packing all institutions, including the IITs, the IIMs and other educational bodies, with people belonging to the RSS.

Reiterating the charge that the BJP practises divisive politics, Rahul said that atrocities against dalits, adivasis and the minorities were on the rise. “In every state, dalits are being killed. But there is not a word from Modi.”

He took on Modi on the issue of women's safety, noting that while the prime minister gave the slogan of 'Beti Bachao, Beti Padhao', he did not say a word on the alleged rape of a minor girl by a BJP MLA in Uttar Pradesh, as also the brutal rape and murder of an eight-year-old girl in Jammu.

“For the first time, in a foreign country, the Prime Minister of India has been told on his face that he is not protecting the women of India,” he said.

Attacking Modi with regard to his visit to China, Rahul said that the prime minister was tasting tea with the Chinese president in a meeting without an agenda. He claimed that Modi has, during the trip to China, not said a word on the Doklam face-off even as the Chinese are building a helipad and positioning its troops in the region.

Aiming to enthuse the Congress workers, Rahul said that the party will certainly win the assembly elections in Karnataka, Madhya Pradesh, Chhattisgarh and Rajasthan, as also the Lok Sabha elections of 2019.

Referring to the Assembly elections in Gujarat, where the Congress' assessment is that it came close to winning, Rahul said, “The strength of the Congress worker was for all to see in Gujarat. The entire might of the Gujarat government and the union government was deployed. The CBI and the ED were also used. However, when our workers stood up, Modiji was forced to sit in a sea plane. His face showed that he was rattled.”