Coronavirus is 'not just a flu', and the effects of the virus should not be minimised 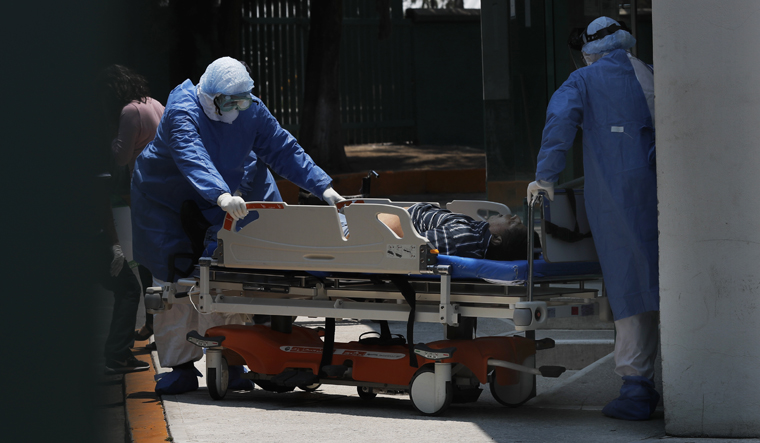 When Tony Award-nominated Broadway actor Nick Cordero was hospitalised with the coronavirus in early April, the disease caused blood clot issues in his right leg. On April 20, his wife Amanda Kloots wrote on social media: "They had him on blood thinners for the clotting, unfortunately the blood thinners were causing other issues. The right leg will be amputated today." Cordero has since recuperated at Mount Sinai hospital in New York.

Cordero was just one among many such cases facing unexpected or long-term complications from coronavirus. Critically ill COVID-19 patients face a high risk of developing kidney failure, stroke, and other complications associated with blood clot formation, according to a study which suggests that early tests may help save those severely affected by the disease. The study, published in the Journal of American College of Surgeons, builds on growing evidence that COVID-19-infected patients are highly predisposed to developing serious and lasting blood clots. Citing COVID-19 case studies in China and from different parts of the world, they said the clots in these patients do not appear to dissipate.

The SARS-CoV-2 (novel coronavirus) has polarised opinion across the globe; Many have argued that its low mortality rates—less than seasonal flu in some cases—and its effects on a small subset of the population (elderly and those with pre-existing conditions) were good reasons for the world to open up as quickly as possible. US President Donald Trump and Brazilian premier Jair Bolsonaro, for instance, in the earlier stages of the pandemic compared it to a "mere flu".

While more medical evidence is emerging on the actual lethality of the virus, what still remains unknown is a whole host of long-term complications that the virus can cause.

US researchers are currently conducting a randomised clinical trial of a drug that breaks down blood clots in COVID-19-infected patients. "This is an early step on the road to discovering treatments to prevent some of the complications that come with this disease," said Franklin Wright, lead author of the study from the University of Colorado.

According to the study, patients who are critically ill, regardless of cause, can develop a condition known as disseminated intravascular coagulation (DIC). In this condition, the blood of these patients initially forms many clots in small blood vessels, the scientists said. The body's natural clotting factors can form too much clot, or eventually not be able to effectively form any clot, leading to issues of both excessive clotting and excessive bleeding, they noted.

However, in patients with COVID-19, the researchers said, the clotting appears to be particularly severe. Citing COVID-19 case studies in China and from different parts of the world, they said the clots in these patients do not appear to dissipate.

Strokes in young and healthy

A research report published by the New England Journal of Medicine (NEJM) detailed the cases of five patients younger than 50, who, over a two-week period from March 23 to April 7, presented symptoms of a large-vessel ischemic stroke.

"A retrospective study of data from the COVID-19 outbreak in Wuhan, China, showed that the incidence of stroke among hospitalised patients with COVID-19 was approximately 5 per cent; the youngest patient in that series was 55 years of age Moreover, large-vessel stroke was reported in association with the 2004 SARS-CoV-1 outbreak in Singapore. Coagulopathy and vascular endothelial dysfunction have been proposed as complications of COVID-19. The association between large-vessel stroke and COVID-19 in young patients requires further investigation," according to the study.

In March, Olympic gold medallist swimmer Cameron van der Burgh revealed on Twitter the toll the novel coronavirus infection (COVID-19) took on his body. The fit 31-year-old, by age and by health, is statistically in a group with the lowest possibility of mortality due to COVID-19. But, the effects on his physique caused by the virus, he says, were immense. He is a six-time world champion and a four-time Commonwealth champion. “Although the most severe symptoms [extreme fever] have eased, I am still struggling with serious fatigue and a residual cough that I can’t shake. Any physical activity like walking leaves me exhausted for hours,” he said at the time.

The cardiovascular long-term complications of COVID-19 are still being researched; scientists have warned that the virus could cause heart failure, heart attacks and blood clots that can lead to strokes. Researchers from the University of Virginia (UVA) found that almost a quarter of COVID-19 patients—24 per cent—were suffering acute heart failure when they were first diagnosed with the coronavirus.

The authors state that it remains unclear if the heart failure was the result of COVID-19 specifically or if the virus was worsening undiagnosed heart failure. Of the patients with heart failure, nearly half were not known to have high blood pressure or cardiovascular disease, they said.

Chinese government mouthpiece Global Times reported a research study from Center for Reproductive Medicine of Tongji Medical College in Wuhan that claimed that male infertility was a possibility of the coronavirus infection, and that younger persons could be the most affected. "The coronavirus could invade cells through the combination of Spike protein (S protein) and angiotensin-converting enzyme 2 (ACE2). As well as the lungs, many other organs of the human body, such as the testes, small intestine, kidney, heart, and thyroid are affected by the ACE2. The male reproductive function could be affected, as a large amount of ACE2 shows up in testes, mainly concentrated in testicular spermatogonia," according to the report.

"Interestingly, the testicular expression of ACE2 is age related," according to the study."The highest expression recorded in patients aged 30, which is higher than those in their 20s, whereas 60-year-old patients show the lowest level of expression. This might indicate that young male patients are at higher risk of testicular damage by COVID-19 than older patients."

In May, the World Health Organisation (WHO) flagged initial reports from Europe and North America that have described clusters of children and adolescents requiring admission to intensive care units with a multi-system inflammatory condition with some features that are similar to those of Kawasaki disease and toxic shock syndrome. Case reports have described a presentation of acute illness accompanied by a hyper-inflammatory syndrome, leading to multiorgan failure and shock, the international health body said in a scientific brief on the subject. Based on initial laboratory testing, the syndrome maybe related to COVID-19.

According to Dr Mike Ryan, Executive Director, WHO Health Emergencies Programme, the syndrome is rare and only by examining large groups of children can the cause of the disease be established. “Also, it’s a new disease,” Ryan said at the briefing. The effects of a new disease could sometimes be linked to the virus directly, or could also be the result of the body’s immune response to it. More data would clarify whether this syndrome in kids was due to the former or the latter.