The methodology combines the 3D printing and imaging of glioblastoma cells 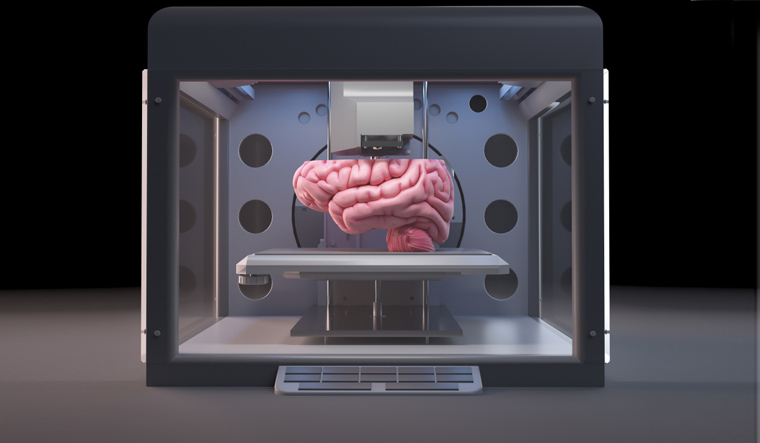 Researchers have 3D printed a complex brain tumour to closely model what happens inside the fast-growing tissue, an advance that may lead to better ways of testing and developing drugs against the malignant disease.

The scientists, including those from Northeastern University in the US, explained that glioblastomas are complex, fast-growing malignant brain tumours which are made up of various types of cells.

They said even with aggressive treatment, which often includes surgery, radiation, and chemotherapy, glioblastomas are difficult to treat, leading to an average survival of 11-15 months.

The study, published in Science Advances, describes a methodology that combines the 3D printing and imaging of glioblastoma cells in a cost-effective way to more closely model what happens inside the human body.

"There is a need to understand the biology and the complexity of the glioblastoma," said study co-author Xavier Intes from Rensselaer Polytechnic Institute in the US.

"What's known is that glioblastomas are very complex in terms of their makeup, and this can differ from patient to patient," Intes said.

In the study, the researchers made bio-inks out of patient-derived tumour cells, and printed them along with blood vessels.

They said the blood vessel network in these cells allowed the printed tissue to live and mature, enabling researchers to study it over a matter of months.

The bio-printed blood vessels also provided channels for therapeutics to travel through -- in this case, the cancer drug Temozolomide.

According to the study, drug delivery to glioblastoma cells in the body is especially complicated because of the blood-brain barrier -- a wall of cells that blocks most substances from reaching the brain.

Due to this hurdle, the researchers believe that their new method may provide a more accurate evaluation of a drug's effectiveness than directly injecting the therapy into the cells.

"That's the unique part of the bio-printing that has been very powerful. It's closer to what would happen in vivo," Intes said.

To see if the drug was making it to the glioblastoma cells and working, Intes and his team developed a special technique to quickly take images of the bio-printed tissue at the cellular level using as little light as possible, so as to not damage the cells.

"We developed a new technology that allows us to go deeper than florescence microscopy. It allows us to see, first, if the cells are growing, and then, if they respond to the drug," Intes said.

According to the scientists, the novel technique may allow researchers to evaluate the effectiveness of multiple drugs at the same time.

However, the scientists cautioned that the technique is not suited yet for studying the effectiveness of certain drugs on a person's individual tumour because of the short time period in which doctors often have to provide treatment.