Researchers have described the pathology of the Chinese coronavirus 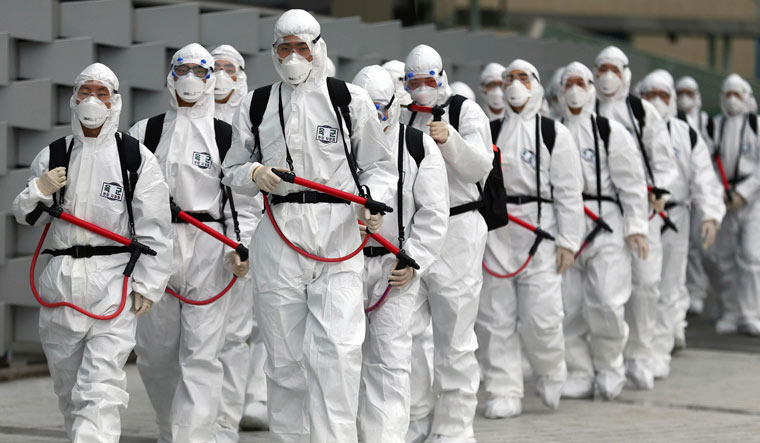 Researchers have for the first time described the pathology of the Chinese coronavirus which has so far killed 3,000 people and infected nearly 80,000 globally since its origin in the Chinese city of Wuhan in December 2019.

The research, published in the Journal of Thoracic Oncology, describes two patients who recently underwent lung surgery, and were found to have had novel coronavirus COVID-19, also known as SARS-CoV-2.

Their lungs exhibited edema, liquid proteinaceous secretions, fibrous connective tissue lesions with patchy inflammation, and multinucleated giant cells, the scientists, including those from the University of Chicago Medicine in the US, said.

"This is the first study to describe the pathology of disease caused by SARS-CoV-2, or COVID-19 pneumonina, since no autopsy or biopsies had been performed thus far," said study co-author Shu-Yuan Xiao from the University of Chicago Medicine.

"This would be the only descriptions of early phase pathology of the disease due to this rare coincidence. There would be no other circumstance that this will happen. Autopsies will only show late or end stage changes of the disease," Xiao said.

Since both the patients did not exhibit symptoms of pneumonia at the time of surgery, these changes likely represent an early phase of the lung pathology of COVID-19 pneumonia, the researchers said.

According to the study, one of the patients was a woman of 84 years of age who was admitted for treatment evaluation of a tumour measuring 1.5 centimeters in the right middle lobe of the lung, which was discovered on chest CT scan.

Despite comprehensive treatment, assisted oxygenation, and other supportive care, the researchers said her condition deteriorated, and she died.

Subsequent clinical information confirmed that she was exposed to another patient in the same room who was found to be infected with COVID-19.

The second patient was a 73-year-old man, who appeared for elective surgery for lung cancer, in the form of a small tumour in the right lower lobe of the lung, the study said.

Nine days after lung surgery, he developed a fever with dry cough, chest tightness, and muscle pain, and a test for COVID-19 came back as positive.

The scientists said he gradually recovered and was discharged after twenty days of treatment in the infectious disease unit.

These two cases, the researchers said, typify a common scenario during the earlier phase of the SARS-CoV-2 outbreak, during which a significant number of healthcare providers became infected in hospitals in Wuhan, and patients in the same hospital room were cross-infected.

They said the presence of early lung lesions days before the patients developed symptoms, corresponds to the long incubation period -- usually 3-14 days -- of COVID-19.

"We believe it is imperative to report the findings of routine histopathology for better understanding of the mechanism by which the SARS-CoV-2 causes lung injury in the unfortunate tens and thousands of patients in Wuhan and worldwide," Xiao said