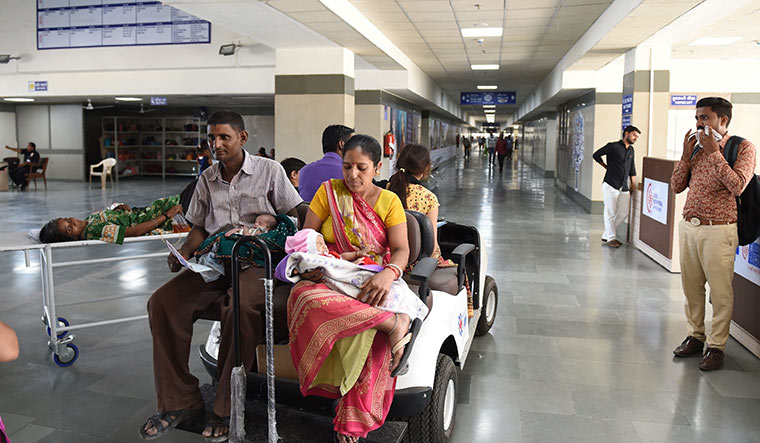 Despite the government's promises, the health budget has only gone up marginally

Finance Minister Nirmala Sitharaman may not have mentioned any new priorities for health in her budget speech, but there's a small increase in the allocation for the health ministry in the latest budget. The Union health and family welfare ministry has got a small boost in its share of money—from the budget estimate of Rs 52,800 crore last year, the ministry has been given Rs 62,659 crore this time.

However, it's pertinent to point out that the increase of Rs 9,859 crore comes mainly from the hike in the budget for the government's key health scheme, Ayushman Bharat. Last year, after the scheme was announced, its share in the health budget stood at Rs 2,400 crore, which has been hiked to Rs 6,400 crore this year, an increase of 4,000 crore. This rise can be explained by the fact that last year, the scheme had officially been launched only in September.

However, the boost is less than what had been demanded. In February, when the interim budget had been announced, The WEEK had reported that the National Health Agency, the implementing agency for PMJAY, had asked for Rs 7,400 crore for this financial year. The total estimate for the scheme (the Centre's share is 60 per cent; it is 90 per cent in the northeast) is Rs 12,000 crore. NHA officials had told The WEEK that the small decrease in funds from what they had demanded originally will not affect the scheme's implementation.

The other part of the Ayushman Bharat scheme — setting up of 1.5 lakh health and wellness centres — has received less attention than the PMJAY (insurance scheme), and has received less of a budget boost as well. The allocation is up from Rs 999 crore to Rs 1,349 crore this year. Given that experts have often emphasised the role of preventive healthcare in reducing the rising burden of non-communicable diseases on the healthcare system, a bigger boost to this part of the scheme would have signalled the government's intent in upgrading its primary healthcare infrastructure.

The allocation for upgrading state government medical colleges (PG seats) has been doubled (from Rs 452 crore to Rs 800 crore) and for strengthening government medical colleges (UG seats) and central government health institutions nearly tripled (from Rs 480 crore to Rs 1,361 crore ). This will help the government enhance the existing infrastructure, increase qualified manpower and decrease the patient load at tertiary care hospitals. However, surprisingly, the money allocated for the National Mental Health Programme has decreased from Rs 50 crore last year to Rs 40 crore.

“It's disappointing that no mention of health was made in the budget speech. If India has to become a superpower, health needs more investments mainly by governments especially in delivering accessible, affordable and quality primary healthcare,” said Dr Ravi Wankhedkar, former president, Indian Medical Association. Experts have been demanding a hike in the overall health budget, from the 1.5 per cent of GDP to at least 2.5 per cent. Despite the government's promises, the health budget has only gone up marginally, from 1.2 per cent in 2013-2014, to the current 1.5 per cent.  “However, a brief mention of social determinants of health such as drinking water and sanitation is encouraging, though,” said Wankhedkar.

"While healthcare allocation had been covered in the interim budget earlier this year, it is still a little disappointing that there was no new commitment to healthcare in Finance Minister Nirmala Sitharaman’s maiden budget. However, one of the most notable announcements in the budget has been the pledge to establish a National Research Foundation to boost research in all areas. We hope the government will allocate significant resources through this body towards boosting the field of medical research in India. We also expect the New Education Policy to focus on creating more doctors and specialists in the country by increasing both MBBS and post graduate seats in medicine," said Dr Shankar Narang, COO, Paras Healthcare.