Who is Nadav Lapid, the Israeli director who called 'The Kashmir Files' a 'vulgar' movie 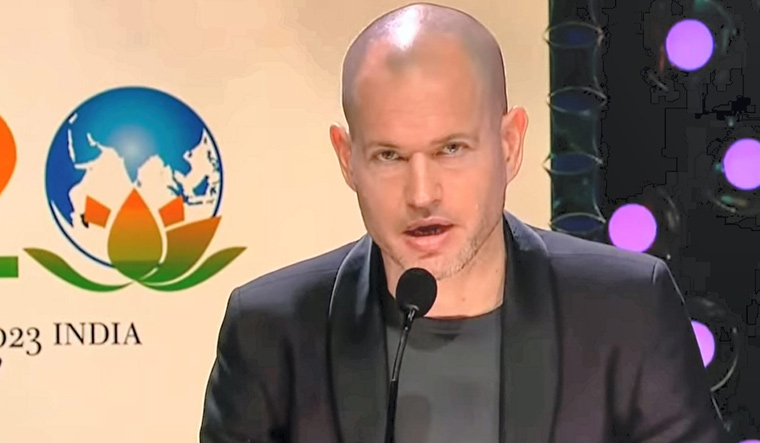 He headed the international jury at IFFI, has been to India earlier and is a much awarded filmmaker. But it was not until his blunt criticism of The Kashmir Files that Israeli director Nadav Lapid hit the headlines, and had people scouring the net to find out more about him.

The Tel Aviv born and Paris-based filmmaker's comments describing the movie as vulgar and a propaganda during the closing ceremony of the 53rd International Film Festival of India in Goa on Monday propelled him straight into a raging row.

Lapid, who said he was disturbed and shocked at The Kashmir Files being chosen for the Indian Panorama section, is clearly a man used to speaking his mind, and doesn't matter if he ruffles a few feathers in the bargain. Doesn't matter either if India's minister and its top stars might be in the audience.

The 47-year-old director of Policeman and The Kindergarten Teacher, chosen to head the international jury at IFFI 2022, had just a few days ago aired his views on the Indian national anthem being played at the opening ceremony of the festival.

"I completely admire the fierce patriotism, but that was an underwhelming experience for an artist at an international event," the writer-director told The Peacock, the flagship publication of the Entertainment Society of Goa (ESG), one of the organisers of the event along with Information and Broadcasting ministry and National Film Development Corporation.

In the interview, published during the November 20-28 festival, he also said he is not participating as an ambassador of Israel but an artist willing to experience different cultures.

If I wanted to represent Israel, I would have gotten into diplomacy, said the director often viewed as anti-establishment in his country.

Unusual for a man in showbiz, Lapid mostly stays away from social media platforms and shuns the media glare.

Based in France, Lapid is the son of writer Haim Lapid and film editor Era Lapid. He moved from his home country to Paris to study literature after receiving a degree in philosophy at Tel Aviv University and mandatory military service. He later studied cinema at the Sam Spiegel Film School in Jerusalem.

His films four features and several shorts are all in Hebrew, and all deeply political.

Lapid's debut feature was the 2011 Policeman about the head of a counter terrorist organisation. The feature, described as a "discomforting and despairing" look at the Israeli society, won the Special Jury Prize at Locarno Film Festival.

It was written and directed shortly before demonstrations across Israel in 2011, when thousands of people took to the streets to protest the rising cost of living.

In a 2014 interview with US-based website Film Comment, Lapid described Policeman as a "pessimistic film about social immobility and incapacity to change reality".

"I identified a huge elephant in the Israeli living room: social injustice and inequality. Unlike historians or sociologists, a filmmaker has the privilege of imagination. I wrote a story about an imagined group shortly before similar groups came to life. In that sense it is an interesting case of the relationship between fiction and reality.”

When the feature was released in Israel in August the same year, the government film rating authority, equivalent to India's CBFC, declared it suitable for 18-year-olds and above. Lapid called the decision an attempt to censor the film's troubling depiction of economic inequity leading to civic uprising. Following the outrage, the age limit was revised from 18 to 14.

The next feature project was The Kindergarten Teacher, the story of a teacher and her obsession with her little student. It was part of the competition section of the 45th IFFI in 2014 and won him the best director award. Besides, Sarit Larry received the IFFI Best Actor Award (Female) for the film.

Five years later in 2019 came his third film,Synonymes about a former Israel Defense Forces soldier who flees to Paris and tries to escape his past. It took the FIPRESCI prize for the best title in competition at the 69th Berlin International Film Festival.

The festival jury described the feature as a startlingly original, shaking the boundaries of narrations.

Lapid's short film From the Diary of a Wedding Photographer, had a special screening at the 55th Semaine de la Critique, the parallel non-competition section at Cannes.

In 2016, he was named member of the jury of the International Critics' Week section of the Cannes Film Festival. He is a recipient of the Chevalier des Arts et des Lettres, conferred on personalities who have distinguished themselves by their creativity in the field of art, culture and literature or for their contribution to the influence of arts in France.

His latest feature, Ahed's Knee, was selected to compete for the Palme d'Or at the 2021 Cannes Film Festival. The film shared the Jury Prize with English-Spanish fantasy drama Memoria by Apichatpong Weerasethakul.

As controversy raged over Lapid's remarks on The Kashmir Files, Sen said the views were completely his personal opinion. None of the others made any mention of their likes and dislikes at a public platform, he said.

Lapid, whose remark attracted ire from Israel's diplomats in India, could not be contacted for his comments. One phone was off, the other unreachable.

Interviews can be very difficult, mostly because I'm afraid to try to speak about a film's political context, to place it in whatever other context (it may have), he said in an interview earlier this year.