Mitra established a trailblazer repertoire with plays on women's emancipation 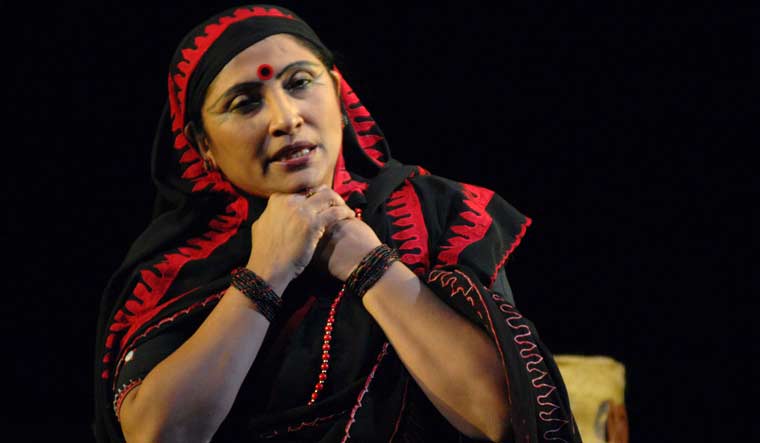 Mitra, 73, a gifted actor, director and playwright, died at her residence in South Kolkata at 3:40 pm and was cremated at Siriti crematorium later without much fanfare, her close friend and theatre personality Arpita Ghosh said.

She had been suffering from heart-related ailments but had refused to be hospitalised and her condition worsened on Sunday, Ghosh said.

The noted actress had wanted to be cremated without any fanfare in her last wish to her near friends, Ghosh said showing a copy of her last wish.

Mitra, who was the recipient of Sangeet Natak Akademi in 2003, Padma Shri in 2009, and Banga Bibhusan in 2012 would be remembered by her fans and critics alike for her solo performance as Draupadi in `Naathvati Anaathbat' (which she also wrote and directed), and as Sita on `Sitakatha' or Bitata Bitangso.  She acted as `Bangabala' in Ritwik Ghatak's Avante Garde film `Jukti Takko Aar Gappo' (Reason, Debate and a Story'. After spending years in `Bahurupi', a famous theatre group, founded by Sambhu Mitra and Tripti Mitra, where she had immortalized the character of Amal in Tagore's `Dakghar', Saoli founded `Pancham Baidik' which established a trailblazer repertoire by introducing widely acclaimed plays on women's emancipation. Theatre personality Bibhas Chakraborty recalled his association with Saoli for years since her younger days in Bohurupee.

"She was ill for many years but never knew she would leave us so early." Chakraborty said. Ghosh, the Posukhamar director, recalled how she became Saoli's own daughter and how she had shunned any publicity about her illness.  Theatre personality Rudraprasad Sengupta said Saoli had been away from public view due to ailments for some time but she had mesmerized audiences with her stellar performances through the years.