Churuli, Dhamaka, Your Honour 2, Tiger King 2: What to watch on OTT platforms this week

A quick look at upcoming series, documentaries and movies 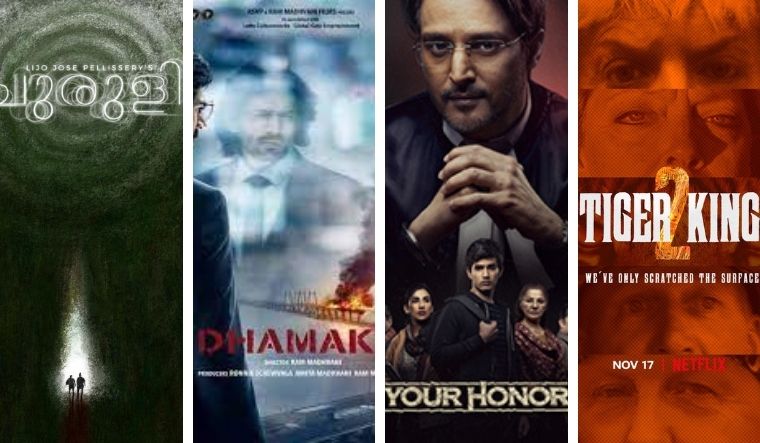 A handful of interesting OTT releases are lined up for the third week of November. Here is a quick look at series, documentaries and movies you should watch out for on streaming platforms this week.

The Kartik Aaryan-starrer follows the story of an ambitious ex-news anchor Arjun Pathak, who is given another chance to go live on prime-time television when a terrorist calls him with a bomb threat. Directed by Ram Madhvani of Aarya and Neerja fame, the film also features Sacred Games star Amruta Subhash, Vikas Kumar and Vishwajeet Pradhan in pivotal roles. Dhamaka has been written by Puneet Sharma and Madhvani. The film is backed by Ronnie Screwvala's RSVP Films and Ram Madhvani Films.

The much-awaited Lijo Jose Pellissery film features Chemban Vinod Jose, Vinay Forrt, Joju George and Jaffer Idukki in the lead. "A few people who go in search of a man named Mayiladuparambil Joy, get trapped in a terrifying time loop in this sci-fi/horror tale of insanity, fear and 'aliens'?,” SonyLIV tweeted, announcing the released date of the movie.

The documentary series that explores how the brain controls our dreams, fears and actions is back with the next season featuring five episodes. Emma Stone returns as narrator as the dcoumentary explores what is happening inside our brains and how our personality traits affect our behaviour.

Jimmy Shergill is back as judge Bishan in the courtroom thriller series that had received positive reviews for its first season. The series also features Gulshan Grover, Zeishan Quadri, Mahie Gill, Mita Vashisht, Suhasini Mulay, Richa Pallod and Pulkit Makolin in prominent roles. 'Your Honor' is an official adaption of the Israeli series 'Kvodo'. The Indian counterpart is directed by E. Niwas.

Netflix's hugely popular docu-series returns for the second instalment with more mystery and drama around Joe Exotic and Carole Baskin. Season 1 centred on the bizarre life of Joe Exotic, the owner of The Greater Wynnewood Exotic Animal Park, and his battle with Big Cat Rescue’s Carole Baskin. It ended with the sentencing of the show’s main character, Joe Exotic, and this series will kick off from there. The second season drops amid a legal tussle as Baskin recently sued Netflix for using footage of her in the series.

Baskin alleged that Royal Goode Productions has breached contract by continuing to use footage of her and her husband in Tiger King 2, since they only signed appearance release forms for the first part of the documentary.