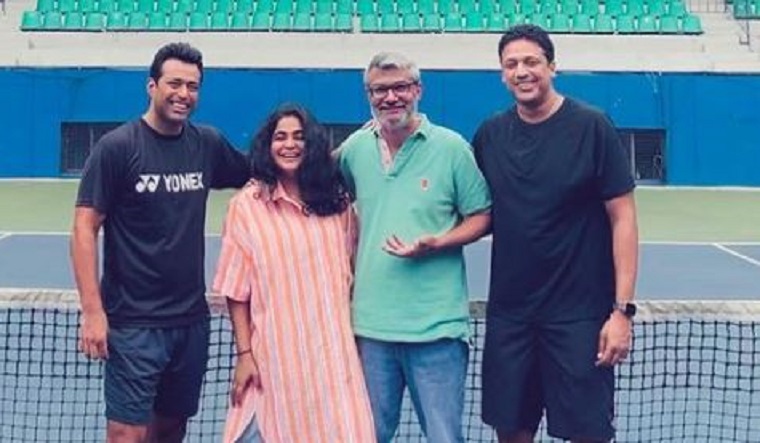 Filmmaker Ashwiny Iyer Tiwari on Monday announced the team has finished shooting for the upcoming docu-drama on Indian tennis greats Leander Paes and Mahesh Bhupathi, saying she is full of gratitude that they managed to pull off "this massive production across the world" during the pandemic.

Titled Break Point, the series has been co-directed by Ashwiny and her filmmaker-husband Nitesh Tiwari. This will be the first time the pair has helmed a project together after delivering blockbusters like "Dangal" (Nitesh) and "Bareilly Ki Barfi" (Ashwiny).

The series, backed by the couple's banner Earthsky Pictures, aims to chronicle the "untold story of Paes and Bhupathi", who were the first Indian pair to win at the Wimbledon in 1999.

The filmmaker took to Instagram and posted a picture with Nitesh, Paes and Bhupathi.

"A year and half journey with @mbhupathi and @leanderpaes comes to an end to only begin a new journey of our friendship for life. First of many as an evolving producer. @niteshtiwari22 and I co - directing for the first time. Writing and documenting a story of two extremely talented champions in the form of a docu drama. Again a first for Nitesh, Piyush (Gupta, writer) and me," Ashwiny wrote.

The "Panga" helmer thanked her team for coming together in making "Break Point", even amid the coronavirus pandemic. The series is gearing to stream on ZEE5.

"We are filled with immense gratitude that along with our studio partners @zee5 we could pull this massive production across the world in these trying times of pandemic. A big thankyou to our biggest backbone @varun.shetty.1840 @kavanahalpara @raiajayg and my fabulous production, direction, accounts team.

"And Bimal Parekh at @earthskynotes and thankyou to Collective Artist Network for packaging this web series and every single sports partner, sports person, line producers across the world who made #Breakpoint happen," she added.

Paes and Bhupathi, collectively nicknamed the 'Indian Express', played together from 1994 to 2006 before reuniting for a second stint from 2008 to 2011. They also had a public fallout but have put that behind them now.

Ashwiny said she hopes the audience will enjoy the series -- coming soon on the streamer -- as much as the team enjoyed hearing and speaking to the world champions.

"Aspiration. Inspiration. Onwards and upwards to Indian sports," she added.

Bhupathi shared the same picture on Instagram and thanked Ashwiny and Nitesh, writing that the pair was the apt choice to chronicle their story.

"It's a wrap! Thank you @ashwinyiyertiwari @niteshtiwari22, after spending so much time and effort over the last 18 months there is no doubt in my mind it could have only been you to tell the story. Can't wait to see it. Stay Tuned. Coming soon on @zee5," he added.

Paes also announced the wrap on Instagram, calling working on the web series a "fun process".