The Tamil anthology series releases on Netflix on August 6 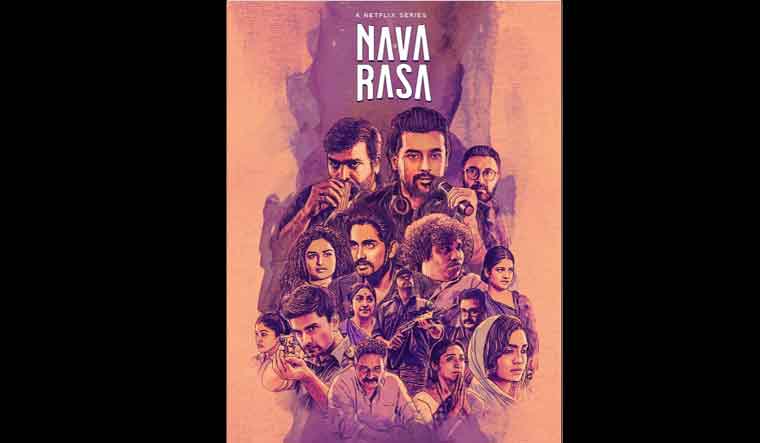 The last year and half a has have been an emotional rollercoaster for many. Like every other industry, Tamil cinema also battled difficult times—the worst affected being the daily-wage labourers. To explore avenues to help them, ace filmmakers Mani Ratnam and Jayendra Panchapakesan came up with the idea of the anthology series Navarasa, meaning nine emotions. After discussions, several top names in the industry came together to make it happen, giving the idea a soul and taking the confluence of emotions to the world.

"Our industry was the worst hit and we felt a strong urge to do something for our own people," said Ratnam. "Navarasa was born from this. We reached out to directors, writers, actors and technicians in the industry with this idea. The response was a resounding 'yes' from all of them."

The project was carried out during the pandemic, under difficult conditions by different teams, said Ratnam. With safety measures in place, the nine short films were made. "People from over 190 countries will see the work created by an industry coming together for its people with passion and commitment. Every one of the industry icons has poured their heart and soul into this project for the cause, working pro bono. The result is an anthology that we are excited to share with pride. Navarasa will showcase the talent and creativity of our industry. It will also support 12,000 of our colleagues to tide over the pandemic." They were able to support the less fortunate with the help of Bhoomika Trust, a disaster relief NGO based in Chennai.

Navarasa, to be released on Netflix on August 6, involved a stellar line up of over 40 actors and several hundred technicians and support staff. The anthology features the nine human emotions of anger, compassion, courage, disgust, fear, laughter, love, peace and wonder. Prolific actors and directors like Gautham Vasudev Menon, Karthik Subbaraj, Suriya and Prakash Raj have all lent their services, but the female characters are the ones who subtly bring alive the visceral emotions in each of the nine films. "The characters are built in such a way that their arc defines the storyline," said Jayendra.

Revathy, for instance, is no stranger to essaying strong characters in her four-decade-long career. She said it was a "pleasure to be challenged as an actor" in Edhiri, which deals with compassion. Revathy plays the female lead in it. "The character I played demanded a very subtle yet powerful performance," she said. As Savitri, Revathy’s character constantly transforms and develops as the plot progresses.

"Through art we recover. With the limitations of present times, we artists and creators have come together to present stories that speak to us," said Rohini, who is cast in Payasam. Her film talks about the emotion of disgust. "Navarasa to me is a wonderful teamwork and effort,” she told THE WEEK. Payasam also features Aditi Balan, who felt that a project like this automatically creates multiple possibilities. “My curiosity piqued about how we would explore [disgust]. Under director Vasanth’s lead, this very visceral emotion was subtly rendered,” said Balan. She plays a widow who goes about her life with positivity and determination despite being subject to scorn by society.

While lead artists like Revathy and Rohini play roles to emote compassion and disgust, a young, talented Riythvika takes on anger as Anbukarasi in Roudhram, portraying how it defines and changes one's life. She plays a studious girl who wants to make a dignified life for herself. "Anger is a very powerful emotion," says Riythvika. "It was extremely challenging, but at the same time inspiring for me." She found it challenging and rewarding that the anthology was made quickly and efficiently.

Then there is fear, featuring Malayalam star Parvathy Thiruvoth as a middle-aged woman named Wahida in Inmai. Married to a wealthy, terminally ill man, Wahida raises the issue of women living in fear. The film narrates a series of events that question her actions as she learns multiple truths that revolve around her life.

With Suriya playing the lead in Guitar Kambi Mele Nindru, directed by Menon, Prayaga Rose Martin joins him as a young woman in love, which is sure to resonate with many. Martin's Nethra gets what she wants in a film that has love as its theme.

"Working under the guidance of Mani Ratnam, who is an institution himself, was an honour of a lifetime; a dream unfulfilled for a long time that has finally turned into a reality," said Anjali, who shares the screen with Atharvaa in Thunintha Pin. In this segment on courage, the actor is the wife of a military man who has gone missing, which sets her on a path to find him. "Behind every strong woman is a trove of deep emotion. The emotion of courage is similarly layered," she said. Anjali, who had taken a break from Tamil cinema, is making her comeback with Navarasa.

"Navarasa is truly a cinematic marvel and a landmark moment of cultural pride for the Tamil entertainment industry," said Jayendra. The anthology series is a monumental effort on the part of the makers to bring together some of the finest and most acclaimed talents for a noble cause.