The film is expected to be a gangster drama 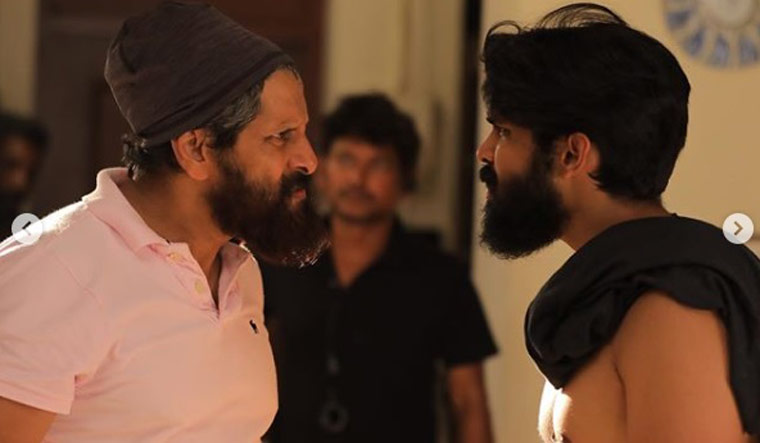 Here is some good news for 'Chiyaan' Vikram fans. The actor's next movie, directed by Karthik Subbaraj, will also feature his son Dhruv. The youngster made his Kollywood debut with Aditya Varma, remake of the Tollywood flick Arjun Reddy.

This is the first time that Vikram and Dhruv will be sharing the screen space.

Taking to Twitter, Subbaraj announced the movie, saying: Happy to announce that my next directorial after #JagameThandhiram is.... 'CHIYAAN60' #Chiyaan60. Starring the awesome Chiyaan Vikram Sir & Dhruv Vikram...And it will be an

@7screenstudio. So excited for this film.

Happy to announce that my next directorial after #JagameThandhiram is.... 'CHIYAAN60'#Chiyaan60

And it will be an @anirudhofficial musical..

So excited for this film.... pic.twitter.com/Oof0je5Eg4

Dhruv too expressed his excitement over being part or the project saying he has always been a fan of Subbaraj and his father. “If this is my dream come true, please don’t wake me up,” he wrote on Instagram, sharing a poster of the movie.

If this is my dream come true, please don’t wake me up!

I’ve always been excited to watch a Karthik Subbaraj film’s FDFS. I’ve always listened to Anirudh’s albums on loop. I’ve always been my dads biggest fan. If this is my dream come true, please don’t wake me up! @7screenstudio @anirudhofficial @ksubbaraj @the_real_chiyaan

According to media reports, Vikram will be playing a gangster in the movie and his son is expected to play his younger self.

Vikram has been going through a lean patch as his previous flicks, Kadaram Kondan, Saamy Square and Sketch received poor reviews and box office collections.