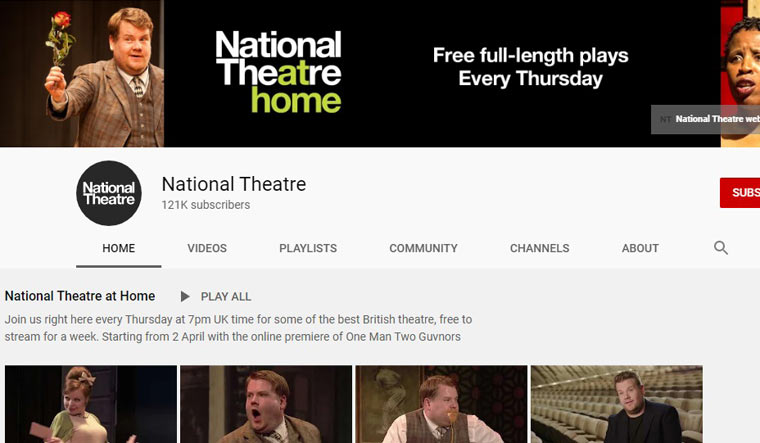 Even William Shakespeare suffered depredations of a lockdown. When the Bubonic Plague swept across London, killing thousands in its wake in 1609, Shakespeare's The Globe remained shut to check the spread of the disease. In fact, the London public playhouses would keep on shutting during extended outbreaks of the plague. It is estimated that theatre closure notices were served for 60 months between May 1603 and February 1610. Romeo and Juliet has a reference to the Black Plague. Shakespeare himself survived a plague outbreak as a newborn infant.

It is now our turn to make sense of a new normal—a life without experiencing a live theatre show.

On World Theatre Day, as prosceniums remain dark in the midst of an unrelenting pandemic, it is reassuring to know that there are theatrical initiatives adapting themselves in the time of a contagion. National Theatre Live, an initiative by the publicly-funded Royal National Theatre in London, will unveil a new at-home initiative with the closure of theatres due to novel coronavirus. Now you can watch West End—Broadway style plays from the comfort of your home. From April 2 onwards, audiences around the world can watch a number of NT Live’s productions for free on National Theatre’s YouTube channel. A production—formerly filmed in front of an audience in the theatre—will be streamed every Thursday and be available on demand for up to seven days.

Up until now, NT Live's productions were beamed in cinema theatres and art and cultural centres in the UK and internationally. In Delhi, Stein Auditorium at the India Habitat Centre (now temporarily closed) has been broadcasting NT Live productions every month for the last few years. With the closure of theatres, cinema and other entertainment venues, web-streaming of virus-cancelled theatre productions is an idea worth tapping into. In India, CinePlay by Hotstar originals already streams popular stage productions with seasoned thespians like Nandita Das, Saurabh Shukla and Lillete Dubey playing memorable characters. But the services come at a price and the roster hasn't been updated.

"We are all about experiencing theatre together. At a time when many theatre fans around the world are not able to visit National Theatre Live venues or local theatres, we are excited to introduce #NationalTheatreAtHome," tweeted the official handle of NT Live on Thursday.

We’re all about experiencing theatre together. At a time when many theatre fans around the world aren’t able to visit National Theatre Live venues or local theatres, we’re excited to introduce #NationalTheatreAtHome pic.twitter.com/825dfVTvxW

The first set of plays—National Theatre at Home—includes Richard Bean’s comedy riot One Man, Two Guvnors, about an “an insatiable Humpty Dumpty who has hired himself out to two masters he has determined to keep apart while doubling his wages and calories”, Charlotte Brontë’s Jane Eyre (April 9), Robert Louis Stevenson’s Treasure Island (April 16) and Shakespeare’s classic comedy Twelfth Night (April 23), with further updates on a playbill schedule stretching out till June 30.

NT Live broadcasts—which began transmitting productions to some 325 venues globally in the autumn of 2010—has changed the game of digital projection of live drama with their innovative use of technology. The cameras, which record footage of plays for NT Live, use tracking shots as well as cranes to avoid a static feel. Before a live performance, there are usually full camera rehearsals, often with the cameras installed in the best seats of the auditorium. The actual shoot does not proceed without a live theatre audience who know they are paying reduced prices for being included in a broadcast. Even the stage for an NT Live shoot differs from a traditional proscenium theatre, allowing for multiple camera positions. Audience members are part of the transmission. While the flexible camera strategy makes the performance seem fluid, NT Live productions are also highly regarded for their faultless picture clarity and sound recording. The experience might just be as exciting as watching a game of football at home.