Much of the horror is orchestrated with the help of ominous music, great camerawork 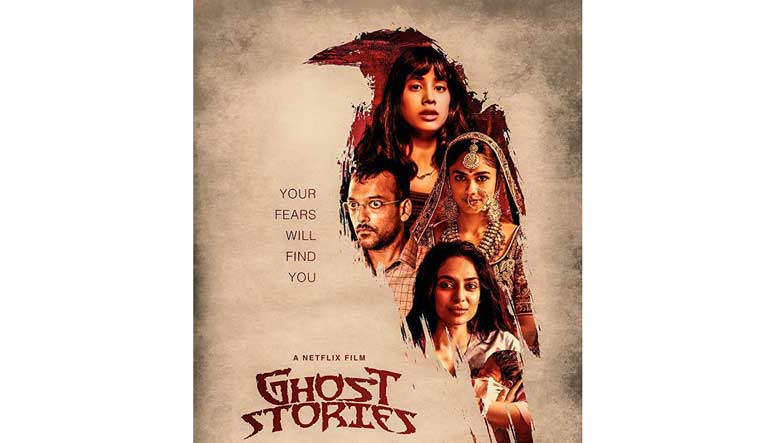 The quartet of Indian directors—Zoya Akhtar, Dibakar Banerjee, Anurag Kashyap and Karan Johar—who brought to movie-goers Bombay Talkies and the much acclaimed Lust Stories on Netflix reunited for their third collaborative venture to produce their next anthology of films—this time in the horror genre—titled Ghost Stories. The film premiered on Netflix on January 1.

Ghost Stories consists of four horror short films—the first directed by Akhtar, followed by the short by Kashyap, then Banerjee and finally, Johar. The four shorts are tonally and thematically different from each other, and showcase the directors’ best efforts to pull off spine-chilling and spooky tales of horror and suspense. Well, that is how the directors want you to feel—spine-chilling and spooky. Unfortunately, the efforts go in vain, falling victim to a lack of elements that have made the genre so dear to the movie going audience.

Ghost Stories opens with the segment directed by Akhtar. The establishing shot itself rings the alarm of spookiness—Janhvi Kapoor sits on a bench by a tree bereft of its’ leaves, flocked by crows (a motif that can be observed throughout the anthology), in an ominous weather. Kapoor can then be seen working as a home nurse for an old-aged lady (portrayed by Surekha Sikri) in a vast apartment that is designed and lit to fit the label of a ‘haunted house’. The lady, whom Kapoor calls ‘Aunty,’ is bed-ridden and suffers from dementia. Moreover, she is abandoned by her son, who is never seen on screen. Kapoor’s character has a personal issue—she is unable to spend time with her lover (played by Vijay Varma). Strange events start to take place in the house that scare Kapoor, and makes her call her boyfriend to stay with her during the night. The segment does not boast much of plot development and the occasional jump scares, but the impeccable camerawork, which moves through the dim-lit corridors in ambitious one-takes and Kapoor’s performance as the terrified home nurse who struggles with her personal and professional travails, works to Akhtar’s favour.

Following this is Kashyap’s segment in which he gives a horror spin to a mother’s obsession over her stillborn child, and a somewhat oedipal complex of a school-going kid to the woman who takes care of him. In both themes, the woman in question is Sobhita Dhulipala, in what is the one of the best performances in the anthology. Dhulipala’s character, Neha, awaits her second child, after her first delivery ended with the child being stillborn. However this troubles Ansh (played by Zachary Braz), as it leads him to question whether the newborn child will reduce Neha’s affection towards him. Kashyap intends to treat both these toxic obsessions in the suspenseful and chilling manner. The greyish-hued visuals of the segment really contribute in bringing this ominous feel. Here too, the director's efforts to scare his audiences are limited to the formulaic background score and the penultimate sequence, a gory yet symbolic manifestation of the aforementioned obsession.

Banerjee’s segment is a post-apocalyptic-meets-zombie-movie take on a contemporary social theme, one that is hard to miss as the director deftly weaves a complex universe around the domination of Bigtown, a city, over Smalltown, an evidently marginalised village. The main protagonist, played by Sukant Goel, happens to visit Smalltown. He learns about the trouble plaguing Smalltown—zombie-like cannibals from Bigtown are eating the villagers of Smalltown. The social commentary here is subtle, yet evident. Banerjee’s segment does not have all the ingredients of a horror film; however, it works in scaring the audience with the bloody depictions of cannibalism and flesh-eating that could make the viewer squirm. The segment has twists and turns in the plot that make it all the more engaging, especially as it inches towards the climax.

Johar’s segment has all the ingredients of a KJo production—affluent families, a big fat Indian wedding, well-lit sets and to top it all off, a cheesy romantic song. For a person who has defined his own style of filmmaking, this is no big deal. Mrunal Thakur is married to a young, handsome and rich man who has a quirk of his own—he talks to his ‘Granny’, who has been dead for the past two decades. The wife is evidently sick of this side of her husband, which unusually has the backing of his family. Of the four segments, Johar’s is the one which is the most colourful. While the other shorts relied on their gloomy and ominous ambience, Johar brings out the ominous in the well-lit grandiose sets. Ironically, the climax sequence is as colourful as Johar’s previous directorial outings.

Ghost Stories is indeed an ambitious effort—to bring together four directors who have made their mark of their own in the industry. The anthology is their genuine take on the genre, each segment distinct in tone, theme and technicality. But what lacks in all of them is the absence of the scares that occasionally raise the hair on the back of your neck. The element of surprise is missing, and much of the “horror” is orchestrated with the help of the ominous music and some exceptional camerawork. As far as the craft is concerned, the filmmakers, interestingly debutants in the genre, have done laudable work. But the question whether they have done complete justice to the genre remains debatable.

Personal opinions may vary, but Banerjee’s and Kashyap’s segments were my favourites of the four.