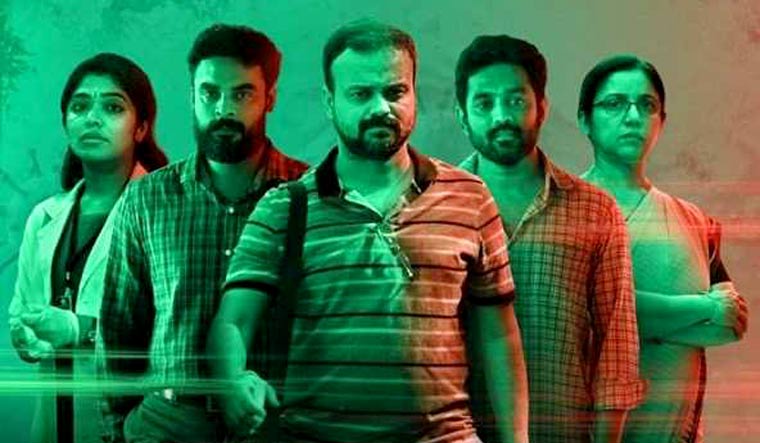 Malayalam director Aashiq Abu's latest directorial Virus, based on the Nipah virus outbreak in Kerala in May 2018, captures the doomsday panic of the moment and the compassion that suddenly grew like a boon in the minds of men and women leading workaday lives. When devastation beckoned, real life super heroes as daring as the fictional ones in Marvel and DC comics were born.

Virus is also about the research, coordination and the fleet-footed thinking that played no small part in this collective upstaging of a deadly epidemic with no known cure. Almost all Nipah heroes have been portrayed with due importance in the movie—from the young nurse Lini Puthussery, who succumbed to the fight and who embodies both the spirit and the pain of Kerala's commendable fightback, to K. K. Shailaja, Kerala's health minister, whose calm self-assured leadership was both inspirational and soothing.

We catch up with the real-life characters of the movie who have more awe-inspiring stories to share:

Why is everyone on ventilators?

The Nipah fear begins on screen when the district collector (played by Tovino Thomas) gets a phone call that informs him that there aren't any ventilators left in the Government Medical College, Kozhikode. The then Kozhikode collector, UV Jose IAS, remembers that day from last year like yesterday. "I was on my way to ofce when I got the call from the district medical officer (DMO). I was surprised, and a bit shocked. It was fever season indeed, but why were all fever patients being transferred to the ventilators? I felt something was seriously wrong," he recalls. It took a couple of days more for the medical team to confirm that it was Nipah. Jose pulled a committee of experts to address the issue. "I am a more proactive person than the character played by Tovino. I was desperately contacting the concerned medical staff and arranging necessary facilities. I remember how I, as a district administrator, reflected the fear of entire Kozhikode people," he says.

Tovino Thomas motivates the ambulance drivers in the movie saying that Kozhikode surprised him with its compassion and cooperation. Jose says that it is a sentence taken from his real life experience. "No other city would have overcome such a massive epidemic attack this much easily. Kozhikode is a highly resilient city. The people here stand out for their commitment, hardwork and compassion," he says.

It was Dr Anoop Kumar of Baby Memorial hospital, Kozhikode, who introduced the word 'Nipah' to Kerala. The third Nipah patient was struggling for his life by then. Anoopkumar recalls how he called upon the patients and interacted with them so informally so that he could observe their mannerisms and the physical challenges they were facing. "I observed the patients so keenly that I was cutting off the chances of possible ailments one by one in my mind as they talked. It was with disbelief that I finally settled for Nipah," he says.

Actor Rahman plays his character in the movie. For Anoop Kumar, the movie Virus stands miles away from reality. According to him, the plot of the movie is too dramatic and rooted far away from reality. "There is no point in comparing the movie and what happened in reality. The movie Virus is a very good attempt as a medical thriller. But it has excluded some very important real life characters and incidents. A film has its own limitations, I understand," he says.

Virology expert at Manipal institute of virology, Dr Arunkumar pronounced the Kozhikode epidemic as Nipah after several rounds of cross-checking. For him, the communication was the worst part than fighting the disaster. "I had to address more misconceptions than general queries. By the time I could give the district administration and media a briefing about the nature of Nipah virus, a rash of gossip spread among the public," he says.

Arunkumar joined the Nipah core committee constituted by health minister K.K. Shailaja and led the research. From the very rst step of identifying the variant of Nipah virus found in the index patient, Kunchacko Boban played his character in the movie Virus. “This couldn't be the first time Nipah virus infected people in Kerala. Nipah virus has been here as long as the bats are. This is the first time it exhibited identifiable symptoms,” he says.

Seethu Ponnu Thampi—rather the detective who traced the transmission dynamics of 2018 Nipah outbreak of Kozhikode, is literally enthralled after watching the movie. Then a second year PG student in community medicine, Seethu discovered the links between all the affected patients through her inquisitiveness and perseverance. Parvathy Thiruvoth played her character in the movie. Her husband Dr Bijin Joseph's role was played by Jinu Joseph.

Seethu learned about the epidemic first, when her husband Bijin told her about one of his patients, who was admitted after fever, exhibited symptoms like that of rabies and died due to hypertension. “It confirmed, Bijin asked me to go to our native place with children. I was determined to serve people. I sent my children to our parents' house and stayed back with Bijin,” Seethu recalls.

After Nipah virus was confirmed in Mohammed Sabith and his brother Salih, the next patient hailed from a different, far-off village. This triggered doubt in the community medicine student in Seethu. It was then that the DMO sought the help of community medicine students in preparing frequently asked questions (FAQs) and their answers to optimize the control room performance. Seethu went on the field and surveyed people scanning the length and breadth of Kozhikode. “I had to establish the link between Sabith and the third reported patient because my city cannot afford to have two index patients and double the impact of epidemic attack. But to be frank, I never knew the value of my findings,” she laughs.

Seethu presented her findings before the Nipah core committee including collector UV Jose and the health minister in the first week of June, 2018. Seethu was nervous to stand in front of the dignitaries. She appreciates the way Parvathy presented her character on screen. “I lived that moment once again when I watched Parvathy entering the core committee meeting in the movie. I was literally shivering. Parvathy has observed me so well that her mannerisms, dressing style, hairstyle and even the way she has wrapped her duppatta is exactly the same as mine.

It was collector UV Jose who called Seethu the Nipah CID. Medical officer RS Gopakumar took up that nickname and never missed a chance to call Seethu 'CID' in front of the public. Seethu says she was patient, investigated their past and established their links with the index patient. Her findings became crucial in fighting the Nipah virus outbreak. Seethu's younger child was one-and-a-half years old when the epidemic spread in Kozhikode. She immediately stopped breastfeeding and sent her children to her native place to stay back and serve the public.

Indrajith plays the character of R.S. Gopakumar in the movie Virus. When natives protest the cremation of Nipah victims on public grounds, it is the district collector who picks Baburaj (Indrajith) and asks him to somehow execute the task. Described as a daring, rude bureaucrat, Baburaj is shown as a tough guy who doesn't fall for emotions and sympathies. Medical officer for Kozhikode municipal corporation Dr R.S. Gopakumar laughed when asked about his character in the movie. He said that Indrajith excelled in his role, with his awless acting skills and expressions. “UV Jose entrusts me with such tough tasks all the time. I don't concede to sentiments and public rage, that is true. But unlike in the movie, I entered the scene after sister Lini's body was cremated. It was indeed a hard task to deal with the public on one hand and to perform our duty, on the other. You cannot always be soft-spoken and humble if your priority is doing your duty,” Gopakumar says.

Ubeesh and nursing student Ajanya are two real-life warriors. The duo literally fought a terrific battle against the disease and became the only two survivors of 2018 Nipah outbreak. Ajanya, now a final year student, recalls those days with fear and disbelief. A Koilandy native, Ajanya was admitted to Kozhikode Medical College Hospital for high body temperature and loss of consciousness. She remained unconscious for an entire week in the medical college ICU. “I opened my eyes to the isolation ward of Kozhikode Medical College. A doctor, all wrapped in a white protective outfit, informed me that I have successfully survived Nipah virus attack and my latest test results were all negative. It was then I realised that I had Nipah,” Ajanya says.

Sajeesh, husband of deceased nurse Lini Puthussery, watched the movie with tears rolling down his cheeks. For him, it was a revisit to his worst-nightmare-came-true, the death of his sweetheart.

Sajeesh told the media that Rima Kallingal delivered a flawless performance as Lini. Even the ways Rima spoke, walked, smiled and glanced resembled Lini's. Sajeesh, then an NRI, ew back home learning about his wife's disease. Though he couldn't spend time with his sick wife, she had written him a touching letter which moved the hearts of Keralites. “I couldn't complete watching that part. I relived those moments in the theatre,” he said.

Health services director R.L. Saritha, district medical officer Jayasree and health secretary Rajeev Sadanandan IAS were the three idols of selfless service in this fight against Nipah. Poornima Indrajith played a character representing all these three officials in the movie. They were the core-members in the core committee. In other words, the disaster management was vested in their hands. As in the movie, one of them was hit with a fever which all other suspected to be Nipah. But the person recovered soon after the test result turned Nipah negative. These three government officials coordinated the control room operations, sought experts' advice, and made quick decisions until Kozhikode was pronounced 'Nipah-free' towards the end of June, 2018.

Commenting on the movie, RL Saritha IAS said that the movie is a very good attempt to document Kerala's fight against Nipah. Though she was impressed by the way her character was shown in the movie, she refused to make further comments due to protocol.

This story was originally published in Onmanorama