Indian economy much better than others: Sitharaman

Our macro economic fundamentals are strong, says the minister 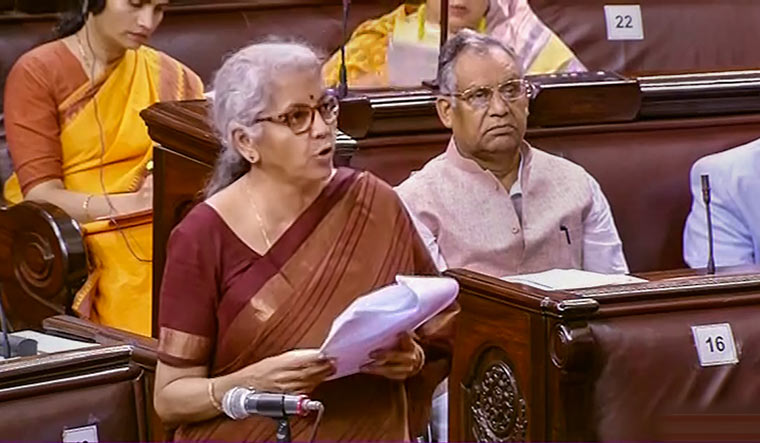 Finance Minister Nirmala Sitharaman said on Tuesday that India's economy was doing much better than that of many of the neighbouring and developed countries. “The government has adopted a targeted approach, based on ground-level inputs to tackle retail inflation which is ruling at around 7 per cent,” she told Rajya Sabha.

Sitharaman was replying to the discussion on price rise in the upper house. “Our macro economic fundamentals are strong,” she said, adding that countries like Bangladesh, Pakistan and Srilanka had asked for loans to tide over the economic crisis, while India was going strong.

The opposition members had attacked the government on slowing economy and high inflation which was hurting the poor and the middle class. Many members rued that the government has brought packaged food items under the GST.

Responding to their concerns, the minister said that GST council has members from all states. As regards to the 47th meeting of the GST where tax was recommended on packaged essential items, it was a matter of record that all states agreed to the proposal, she said. If there are private conversations with the ministers then it is private, but the records stand testimony that no one was opposed it. No one spoke against it,” the finance minister said emphatically.

“The concession for the poor continues as there is no GST on sale of loose items,” she said.

Ont the issue of GST on cheque books, she said it is applicable only when banks buy them or get them printed from outside. The minister said that there was no GST on crematoriums or mortuaries. However, if someone wants to open a new crematorium, GST will be imposed. As members had spoken about GST on hospital beds, she said that there was no tax on ICU beds but only in case where room rent is above Rs 5,000 per day.

She gave figures on  how the GST has rationaislied the taxes which were charged at a much higher rate on several items.

The finance minister also gave figures on how various government schemes have performed. “We shave deposited money in the accounts of 12.5 crore farmers who have received Rs 6000 annually in their accounts. “We are taken care of them. Over 9.6 crore households get tap water. We are not throwing money at poor, but providing facilities.”

On the issue of higher LPG prices and the poor not going for refill after the first free cylinder, she said: “What was intended for the poor, it is reaching them. We are giving subsidy of Rs 200 for each of the 12 cylinders. It may not be enough. But we have to look at how many we pay to.”

Sitharaman had earlier quoted former RBI Governor Raghuram Rajan on economy in Lok Sabha. Responding to it, opposition members in Rajya Sabha said the government should have listened to his other messages. Sitharaman countered saying she only wants his views on economy, not the political ones.

Earlier, during the question hour in Rajya Sabha, members raised questions on the declining value of rupee against the US dollar and on the cess charged by the central government. On the performance of the rupee, the finance minister said that it has withstood the impact of the US Fed's decision much better than other peer currencies.

Replying to another member who raised concern over fraudulent loan apps, Sitharaman assured that several ministries, including Finance, IT, Corporate Affairs and Home Affairs, are working together on addressing the issue, reported think tank PRS Legislative in its daily report.

Meanwhile, Health Minister Mansukh Mandaviya provided an update on the steps taken to contain the monkeypox cases. He said that the government has issued guidelines to state governments, made 15 labs available for testing, and written to the Dubai government for testing details of passengers travelling to India.

In Lok Sabha, the wildlife protection amendment bill was debated and passed. The proposed law increases the number of species protected under the law, and seeks implementation of the Convention on International Trade in Endangered Species of Wild Fauna and Flora.