Price correction in domestic steel prices expected in near term

Some moderation is on the cards with the onset of monsoon 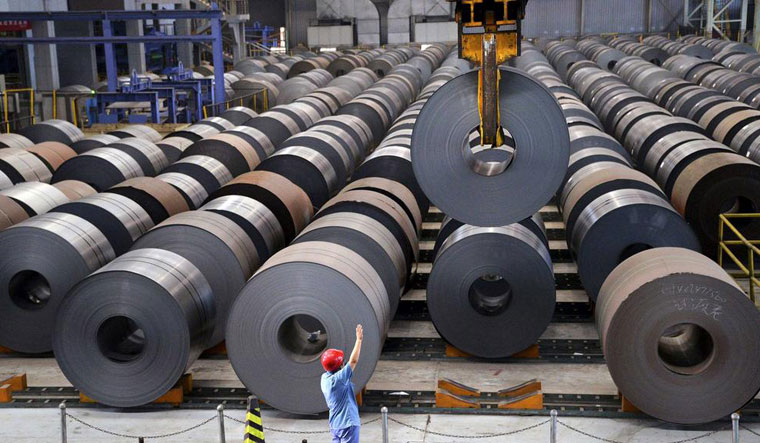 It is expected that steel prices are set to come down ahead of a weak season after a two-year rally correction in prices is likely from current levels but not very steeply as there are many uncertainties in the market. Domestic steel prices are showing signs of stress after a relentless rally over the past two years following supply disruptions, decarbonization measures globally, especially in China and geopolitical risks stemming from the Russia-Ukraine war, which has driven up raw material costs. As per a recent report by CRISIL, while prices have defied correction predictions because of continuing uncertainties, some moderation is on the cards with the onset of the monsoons.

The report points out that heightened geopolitical risks have limited the correction in prices, which had started to moderate early this year. But the Russia-Ukraine conflict, which began in late February, cranked it up again on supply disruption fears. As per the CRISIL report in Europe and in the US, where the impact was greater, prices crossed the $1,600 per tonne mark. Plus the rising input costs added to the pain. At the same time prices of international coking coal rose by 47 percent to $670 per tonne in three weeks from $455 per tonne in late February 22, due to the flooding of mines amid high demand from countries that traditionally imported from Russia. While coking coal prices have eased from their peaks, they continue to get support from strong demand at $500 per tonne.

The CRISIL report observes that different international disruptions kept domestic steel prices elevated and in April 2022 they hit an all-time high of over Rs 76,000, which was 95 percent over March 2020 levels, when Covid-19 was declared a pandemic. “Despite a moderation in demand in January-March, steel prices have inched up owing to higher input costs and buoyant exports. Also, domestic supply stayed tight, eliminating the differential between global landed and domestic prices, which was once nearly Rs 15,000 per tonne. On the other hand, export realization premiums have surged to $75 per tonne in early May.” remarked Hetal Gandhi, Director, CRISIL Research.

The CRISIL report further points out that while steel mills made the best use of elevated global prices, domestic demand began to waver. Soaring construction costs and multiple price hikes by makers of automobiles, consumer appliances and durables drove down demand in the last quarter of fiscal 2022. In the first quarter of the current fiscal, domestic demand was able to see an optical recovery because of a low-base effect, but the report interestingly highlights that consumer sentiment remains sluggish with higher input costs leading to postponement of purchases and construction decisions. At the same time  elevated prices and the resultant inflationary pressure had impacted sentiment across the globe, eventually leading to a price correction.

Since April, hot-rolled coil prices have declined over 25 percent in Europe and in the US to $1,150-1,200 per tonne from a peak of $1,600 in mid-March. It is expected that while exports to these markets from India will remain high in the first quarter of this fiscal, retreating prices will narrow the arbitrage for domestic mills.

Experts from CRISIL expect that exports out of India will remain range bound at 13-14 million tonne this fiscal on the back of revised quota to Europe and supply constraints in south-east Asia. The onset of the weak demand season because of monsoon and less-lucrative exports mean domestic steel prices should begin easing and ultimately move towards Rs 60,000 per tonne by the end of this fiscal. They will, however, continue to hover well above the pre-pandemic levels. Flat steel prices could rise 3-5 percent this fiscal after surging over by 50 percent during the last fiscal. In the near term it is expected that  pressure on supply and raw material value chains, and escalation of the Russia- Ukraine conflict are some of the factors that will affect the prices and demand in the steel sector.