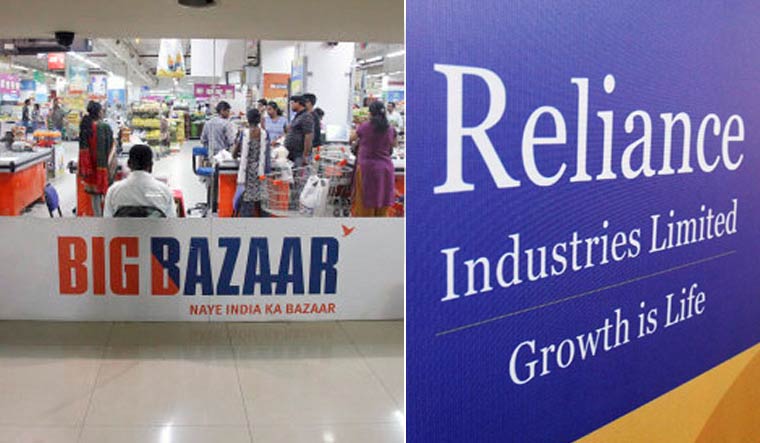 Reliance Industries on Saturday said its Rs 24,713-crore deal to acquire Future Group's assets cannot be implemented after secured creditors of the Kishore Biyani-led companies voted against the proposal.

In a regulatory filing, Reliance said Future Group companies comprising Future Retail Limited (FRL) and other listed companies involved in the scheme have intimated the results of the voting on the scheme of arrangement by their shareholders and creditors at their respective meetings.

"... The secured creditors of FRL have voted against the scheme. In view thereof, the subject scheme of arrangement cannot be implemented," said RIL, while updating on the scheme of arrangement for the transfer of retail and wholesale business and the logistics and warehousing business of Future Group to its subsidiary Reliance Retail Ventures Ltd (RRVL) and Reliance Retail and Fashion Lifestyle Ltd (RRFLL).

Though the shareholders and unsecured creditors of FRL have voted in favour of the scheme, it added.

"In view of the result as already communicated, we would like to inform that the subject Scheme cannot be implemented," the Future group firms said.

Meanwhile, in another development, chairperson and independent director of Future Lifestyle Fashions Ltd, Shailesh Haribhakti, has resigned observing that "volatile, complex and unpredictable legal and financial circumstances have taken unexpected turns, and the board''s recommendation to find solutions have not been met with implementation impetus, according to a regulatory filing by the company.

Haribhakti had chaired meetings of shareholders and creditors of Future Group entities that were called to vote on the Rs 24,713 crore deal with Reliance Retail, after he was given the charge by the National Company Law Tribunal (NCLT).

The listed Future Group companies had called meetings of their shareholders, secured and unsecured creditors this week to get the approval of the scheme of amalgamation and sale of assets as per the deal announced with Reliance Retail.

However, secured creditors, which mainly include banks and financial institutions, of listed entities could not get the mandatory 75 per cent approval.

The meetings were opposed by e-commerce giant Amazon, which in 2019, had picked up a 49 per cent stake in Future Coupons Pvt Ltd (FCPL), a promoter firm of FRL.

While Amazon has declined to comment over the development, no comments could be obtained from Future Group by time of writing story.

In last 21 months, after the deal was announced in August 2020, it was subject to continuous scrutiny by judicial forums, including the Supreme Court, the Delhi High Court and the NCLT. Besides, it is also subject to proceedings at the Singapore International Arbitration Center.

This had also forced RIL to extend the long stop date for completion of the deal three times. Last month, the long-stop date for the Scheme was already extended by another six months to 30th September 2022.

In mergers and acquisition transactions, Long Stop date is a timeframe in which parties agree on which all the conditions precedent for a transaction need to be fulfilled and completed.

In February, Reliance Retail had taken over the operations of at least 350 stores of FRL and offered jobs to its employees after the Kishore Biyani-led group failed to make lease payments to landlords.

Amazon had dragged FRL and promoters to the Singapore International Arbitration Center (SIAC), where an interim award was passed by the EA (the emergency arbitrator) in October 2020, in favour of Amazon. It had barred FRL from taking any step to dispose of or encumber its assets or issuing any securities to secure any funding from a restricted party.

Following this, a string of litigations started before the Delhi High Court, Supreme Court and NCLT.

As per the scheme between Future Group and Reliance Retail, 19 companies of the former were proposed to be consolidated into one entity - Future Enterprises Ltd (FEL) - and then transferred to RRVL under the proposed deal.

However, as per the voting results updated by FEL on Friday, 99.97 per cent of its secured creditors have opposed the scheme.

Though its 99.99 per cent shareholders had supported the deal, its 62.65 per cent of unsecured creditors had voted in favour of the scheme and the rest 37.34 per cent of the total number of votes cast were against it.

Except for Future Supply Chain Solutions Ltd, all listed Future group entities including Future Retail, Future Lifestyle Fashion Ltd, Future Market Networks and Future Consumer failed to get the mandatory 75 per cent voting by secured creditors in favour of the scheme.

In case of Future Consumer and Future Market Networks, 100 per cent of secured creditors have voted against the deal.

Besides, the fate of FRL board and management is uncertain as the company also faces a plea to initiate insolvency proceedings before the NCLT.

Last week, public sector lender Bank of India moved the Mumbai bench of NCLT seeking insolvency proceedings and to declare a moratorium over the assets.