Chingari, and the impact of Web3 on social media 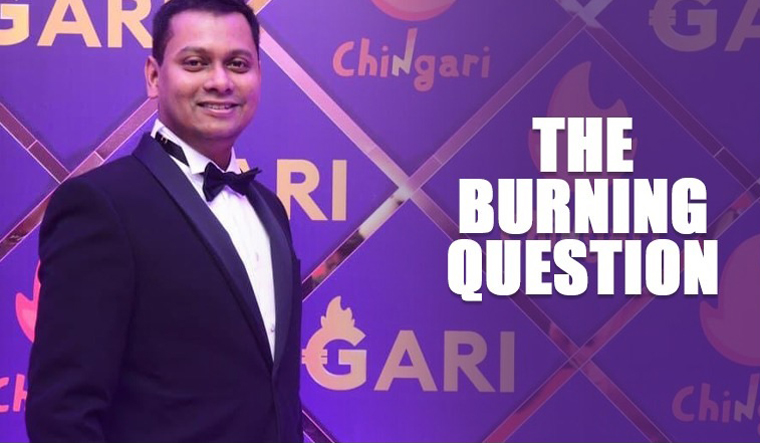 In 2018, when short video application Chingari (currently #1 ranked in India on the Play Store in the social category) came to life, rival TikTok was in the dawn of its all-consuming growth trajectory. At first, Chingari struggled. As reported by THE WEEK, around June 10, 2020, with anti-China sentiment at a crescendo, the app saw a gradual uptick in user base. Within the next six days, it earned 25 lakh users. The surge went on, followed by newspaper reports and a game-changing thumbs-up by a corporate honcho. Tweeted Mahindra Group chairman Anand Mahindra: “I had not ever downloaded TikTok, but I have just downloaded Chingari. More power to you.”

“That tweet shot us into a whole new orbit,” Chingari co-founder Sumit Ghosh told THE WEEK. “The next day we had one million downloads. After TikTok was banned on June 28, everything skyrocketed."

But, in a crowded social media space, Chingari had to innovate. The answer, they found, was in cryptocurrencies and blockchain technology. Chingari developed a native token, GARI, on the Solana blockchain. As a user, you could earn GARI by joining Chingari, uploading original audio, and viewing, commenting and engaging with the videos on the network. GARI tokens, in return, offered governance authority to the holders, enforced through a Decentralised Autonomous Organisation (DAO)—the decentralised successor to limited liability companies (LLCs), with a structure that eschews traditional company hierarchy and bureaucracy.

REQUIRED READING: From DeFi to NFTs and the metaverse, the evolution of the digital assets industry

Ghosh had told MoneyControl: "You can’t build a copy of TikTok and compete. Instagram will come and crush you. You have to innovate. [GARI] is something that none of the other Indian competitors have done so far. Crypto is the necessary edge over other players".

A token sale round, in which more than 25 venture funds participated, raised almost $19 million; on November 2, 2021, the company reportedly raised $40 million within 24 hours of its live token sale.

In a larger context, GARI is an example of the emerging promise of social tokens, and the growing culture of 'tokenisation'; this, in theory, takes a lot of cultural and economic activities which have historically been one-sided in value creation and start extracting values for all parties involved. Suppose you are a creator or an athlete or even a major league sports team. You could release limited edition Non-Fungible Token (NFTs) or social tokens, which can promise real-world perks, governance privileges, or a share of current and future success, and establish a symbiotic, mutually beneficial relation directly with your fandom/audience/supporters. The end user, for the first time, gets an actual financial stake in the patronage game. Not only are you a customer now, you are incentivised to be first adopters, evangelise and promote, galvanising powerful network effects. You can be an audiophile, a sports watcher, a movie maniac, or a hardcore fan—avenues for value creation are open. In theory, incentives are aligned both ways, and value creation would be frictionless and far more equitable, devoid of rapacious middlemen.

This is all a part of Web3, or the idea of a new decentralised internet evolving out of the same blockchain technologies driving cryptocurrencies. If Web1 was static HTML websites, and Web2 the current ad-driven iteration owned and controlled completely by Big Tech (what does a user really own, apart from domain names on the internet?), Web3 is envisioned as something where all users can finally own a slice of the pie and stop being economic renters.

Then, there is the impact that popular apps like Chingari, and play-to-earn (cryptocurrency) games could have on crypto adoption in India. The crypto sector as a whole is accessible only to the internet native, and its organs like Decentralised Finance (DeFi) only to the crypto native. These newcomers could change that by introducing its cryptotokens to an entire generation of developing/rural economies just by interacting with an app (or a game) on a smartphone.

In an interview with THE WEEK, Ghosh speaks about the future of Chingari and GARI, social tokens and circular economy, how Initial Coin Offerings (novel ways of fundraising) and DAOs will queer up the landscape, and the larger questions on the evolution of the creator economy.

1. A little bit about GARI tokens, and what the [public] response to it, and impact has been so far?

We introduced GARI as a social token for the community of Chingari creators, with the idea of giving them governance authority over the future platform developments through the community reserve, and create a circular economy. Being distributed to the contributors for the platform value they create, GARI benefits the value of the network itself. Short videos or social apps are big in India. With GARI, we are trying to merge Chingari with Web3 and make it a truly global platform that is built for everyone. GARI has received tremendous support from people not only in India, but overseas too. Our partnership with Solana blockchain to build our token helped us raise over $12.3M in October 2021. Our recent IDO [Initial Dex Offering] on SolRazr made history [raised $4M in just 15 minutes]. With this step, we are moving towards a major breakthrough in the content creation space. And we hope that our users don’t leave the chance to hop in and join the tribe.

2. With new ways of raising capital like ICOs, and new organisational structures like DAOs, what role can different components of Web3 play in changing the landscape of the social media game?

With the newer elements and organisational structures that have entered the digital space, we are now witnessing a rise in the number of Web3 startups. Many Web2 companies are actively working on migrating to the Web3 ecosystem and explore the new opportunities on offer. The new age of internet [ie Web3] will directly impact the social media game across the globe. With Web3, data will be interconnected in a decentralised way, and organisational structures like DAOs can help boost Web3 further. The growing NFT trend will drive Web3 greatly, and the popularity that NFTs enjoy today will bring social media audiences into Web3 just as quickly as the whole concept was able to gain popularity.

3. What will be the potential impact of social tokens on the creator economy? How powerful will the network effects become when your consumers become shareholders and new avenues of value creation open up across the board?

Social tokens are digital assets backed by the reputation of an individual, brand or community that allow creators to receive more equitable pay and forge deeper relationships within audiences. Their functions vary a lot, but most pack plenty of value as long as there is a community behind them.

The Chingari Platform is an extension of the Chingari ecosystem in the blockchain space. The goal is to empower both creators and viewers with technological and financial instruments to interact directly with each other, and have control over the long-term direction of the social economy impacting the platform and the product. The platform interconnects the Chingari App and the GARI token. This would open up to the users a wider blockchain world where they directly control their assets and can use their tokens both in and out of the app to connect and transact with counterparties, place governance votes, and catalyse platform engagement and user base growth.

Social tokens align users and developers with long-term vested interest and incentives. Based on supply and demand, token value gives all holders a skin in the game, incentivising them to become evangelists in order to increase their own wealth. Ownership is a powerful motivator for users to contribute to products in deeper ways, and creates a more cooperative economic model that ensures better alignment with users to build larger, more resilient, and innovative platforms.

With GARI integration, we aim to become the favourite destination for creators. There are so many creators on Instagram, but what do they get apart from likes and comments? Conversely, creators on Chingari will not only make money, but they will also have the opportunity to monetise. Creators will own the platform. The more they engage with the platform, their ownership will increase because those users will have more GARI tokens.

4. Consider the larger picture. Crypto, to an extent, remains inaccessible to a lot of people because there is still a weighty onboarding process (not to mention funds) required for buying your first tokens or coins. Do you foresee that, for a large part of India, their first cryptotokens will come via apps like Chingari and play-to-earn games? If so, will we see an exponential surge in adoption?

Majority of users in India will soon learn and become more aware of the concept of cryptotokens and Web3 through play-to-earn games and apps like ours. There will be a definite surge in the adoption of crypto tokens in 2022, especially because of Web3 apps and the growing NFT trend. We, at Chingari, doubled our user base on the day we announced GARI. If you look Chingari's global ranking, we are currently at #1 ranked in India on Play Store in the social category. We have two-three million videos being uploaded on the app. In a month, 100 million videos are uploaded. The video content is doubling month-on-month. With GARI, we grasped an amazing market opportunity: We seamlessly brought crypto to the interested audience through the step-by-step introduction of GARI via simple and easy granular in-app mechanics. Gradual sophistication of token usage ensures long-term adoption with smooth learning curves for existing Chingari users. At the same time, GARI will provide a familiar short-form tool for newcomers to onboard the crypto space in an understandable fashion.

Crypto regulations aren’t anything new globally. Many countries have already regulated it, and are actively working on best practices and frameworks. India is also now starting to take notice of this, and are actively engaging with the industry for the same. Hopefully, India will also provide more clarity to companies and users by regulating it.

The short-term goal was to integrate GARI token with Chingari. The long-term plan is to list on NASDAQ. I want to see an Indian consumer internet company listing on NASDAQ. We will be looking to raise a large Series B this year. For the creators, we aim to launch our own NFT marketplace, which will be our biggest revenue stream, followed by creator economy transactions. Social commerce will also be an important feature on the app. We have a tie-up with Amazon. Apart from that, we are also working with other D2C brands to integrate them into the app. We are also looking to set up an influencer marketing platform, where brands can come and hire influencers within Chingari app and do campaigns on Chingari. The in-app currency will be GARI tokens. Brands will have to buy GARI tokens and pay the influencers using GARI tokens.

Chingari is not just an India story. We will be launching in Southeast Asia next, starting with Indonesia in December. We aim to launch in another Southeast Asian country this year. Post that, we will expand to MENA. We plan to make our entry in the US in 2024.