Revolt Motor will be launching a new, cheaper EV motorcycle 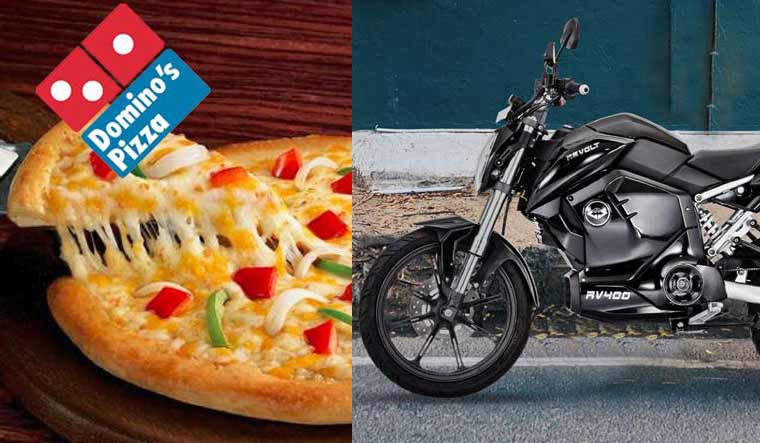 As part of the partnership, Domino's will procure the entire existing inventory of Revolt's RV300 bike model and will progressively acquire its customised Revolt model to transform its fleet, the company said in a statement on Sunday.

Domino's piloted Revolt bikes for its deliveries for quite some time now, and with a successful pilot, it has now partnered with Revolt for its green push, it added.

RattanIndia Enterprises Business Chairman Anjali Rattan said, "Revolt is happy to join hands with Domino's in this partnership which not only makes sense environmentally, but also offers great cost savings for the company."

These bikes will be specially customised for Jubilant Foodworks, which operates fastfood chains Domino's Pizza, to suit its business needs and at the same time enable a zero-emission delivery experience, Revolt Motors said.

Jubilant operates one of the largest delivery fleet in the country and this partnership shows it is also willing to harbinger a change towards cleaner, pollution free delivery alternatives, it said.

Revolt Motor will launch a new model, RV1, with lower pricing, which is expected to go into production from early next year, Anjali Rattan, promoter of Rattan India Enterprises Ltd (REL) has said.

The Gurugram-based Revolt Motors currently has two bike models, the flagship RV400 and RV300 in its product portfolio.

Formerly known as RattanIndia Infra, the company in early April announced it was exiting from the traditional infra business to focus on new growth businesses. In late April, it announced acquiring a 43 per cent stake in Revolt Motor for Rs 150 crore.

"We will be phasing out RV 300 model eventually. In its place, we will be introducing a new model, RV1, at a lower price, which would be a new model altogether, Rattan told PTI.

She said the production of the new model will commence from early next year and it will be 100 per cent indigenised e-bike, she said.

"By December this year our product will become completely make-in-India. We have been importing parts from China but we are now focusing on every single supply from India. The manufacturing of the new bike will start from January, she said.

Revolt Motors has its manufacturing plant in Manesar (Haryana).

With Revolt, REL has launched a new investment cycle in tech-driven transformative, she said, adding, "the digital ecosystem will be the key driver in India's aspiration for a $5 trillion economy."

Noting that about 1-billion Indians will have a large digital footprint, she said, RattanIndia will capitalize on businesses with cutting-edge technologies, which have the potential to transform billions plus Indians.

The new age sectors with large addressable markets and fast growth will be the new business avenues for REL. So all new tech-businesses will grow many fold for the next five years, she added.

Stating the electric mobility market which was USD 5 billion till 2020 will go five times in 2025, she said, India is the largest 2-wheeler market and within that the largest bike market as well.

"The 2-wheeler market in India is still grappling with BSVI norms while the world is moving towards green EVS. So India's largest two wheeler market is ready to be transformed by new technology," she added.

She said, according to a recent Mckinsey report, the e-two wheelers market is expected to be around Rs 50,000 crore by 2025 with annual sales of 50 lakh units.

She said with strong government support of 5 per cent GST on the e-bikes against 28 per cent on fossil fuel run bikes, and revision in the FAME II incentives (incentives of Rs 28,000 for e-bikes), among others along with the incentives by various state governments, makes these bikes quite affordable vis-a vis petrol bikes.

"So the two wheeler's sales have rapidly shifted towards EV for an unbeatable value proposition," she added.

Stating that Revolt Motors is seeing an increased demand, which had forced it to pause the bookings of its bikes many times in the last two months, Rattan said the company is aiming to produce five lakh bikes per annum in the next five years.

EVs also offer a large market for exports to EV OEMs, she said, adding there is a huge opportunity for EV exports originating out of India.

"EV two wheeler leaders from India have the potential to capture significant exports as well," she added.