Rs 475 crore will be used for payment to stakeholders, including financial creditors 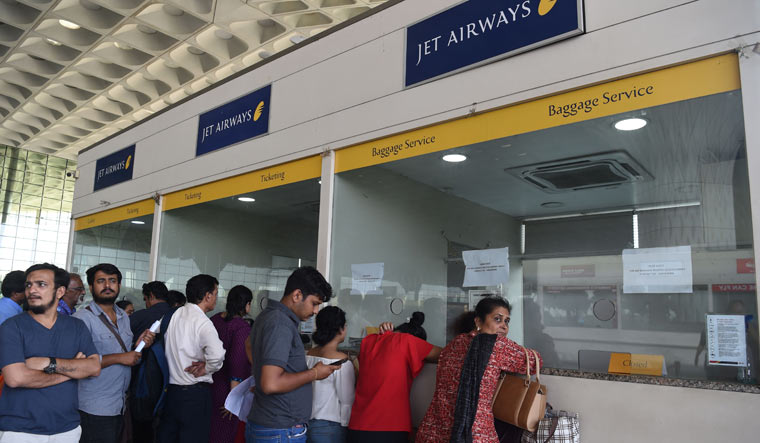 Jalan Kalrock Consortium, the winning bidder for the grounded Jet Airways, will make a total cash infusion of Rs 1,375 crore in the airline and lenders will take a steep haircut on their admitted claims of over Rs 7,800 crore under the approved resolution plan.

The National Company Law Tribunal (NCLT) on June 22, approved the consortium's resolution plan for Jet Airways, which has been undergoing insolvency resolution process since June 2019. The carrier shuttered operations in April 2019.

The consortium has proposed a total cash infusion of Rs 1,375 crore, including Rs 475 crore that will be used for payment to stakeholders, including financial creditors.

An amount of Rs 900 crore would be invested for capital expenditure and working capital requirements for smooth functioning of the airline, as per the detailed order published by the tribunal on Wednesday.

As per the resolution plan, assenting financial creditors would get Rs 380 crore, which means a haircut of 95 per cent compared to the admitted claims of a little over Rs 7,807 crore.

Further, the consortium would invest a maximum of Rs 600 crore in the equity of Jet Airways.

About slots, the NCLT noted that the facts and circumstances would indicate that presently the slots cannot be restored to Jet Airways on a historic basis.

"The thumb rule being 'use it or lose it'. Be that as it may, we must remember that running an airline, much less reviving one, is not a facile business. It involves entire gamut of complex and diverse activities from land to sky and everything in between... when the airline is sought to be revived, which is the sole object of the Code, all concerned need to make concerted efforts to see that the move succeeds," it said.

The Code refers to the Insolvency and Bankruptcy Code (IBC).

The tribunal said that such efforts would not only revive and resurrect the airline but also provide the much needed fillip to the aviation scenario in the country.

"Keeping in view the purpose of insolvency resolution we trust that the authorities concerned including the Government of India shall take a holistic approach... in terms of the guidelines in allocation of slots as and when they are sought, so that the airline takes off the ground and possibly regain its lost glory," the order said.

Regarding the permits, the tribunal said Jet Airways, under the new management, should approach the authorities concerned for renewal and that the same may have to be considered by them favourably, subject to relevant law and rules, so that the implementation of the resolution plan becomes smooth.

"The DGCA and the MoCA shall consider the application/ representation of the corporate debtor (Jet Airways) for renewal/ grant of airport operating permit with due despatch," it added.

About reliefs and concessions sought by the Jalan Kalrock Consortium, NCLT said the monitoring committee may approach the respective authorities and departments for such reliefs.

"The authorities concerned may favourably consider such applications as deemed proper under law, keeping in view the object of resolution of the corporate debtor as envisaged in the Code and various pronouncements of the hon'ble apex court," the order said.

A written order, dated June 22, approving the resolution plan was published by the NCLT on Wednesday.

It "sets out in great detail the provisions of the resolution plan (including the financial proposal, treatment of claims of stakeholders and on the matter of slot availability)," according to a regulatory filing on Wednesday.

A monitoring committee is managing the affairs of the airlines now.

The regulatory filing to the stock exchanges was submitted by Ashish Chhawchharia, who is now the authorised representative of the monitoring committee.

A written order approving the resolution plan was published by the NCLT on June 25.

Shares of Jet Airways, which had been on an upward trajectory since the NCLT approved the resolution plan on June 22, slumped in early trade on Thursday.

The scrip declined 5 per cent to touch its lower price band on the BSE. On both BSE and NSE, the stock was trading at Rs 126.45 apiece.