IT firms may slash 3 million jobs by 2022 due to automation, to save $100 billion in cost: Report 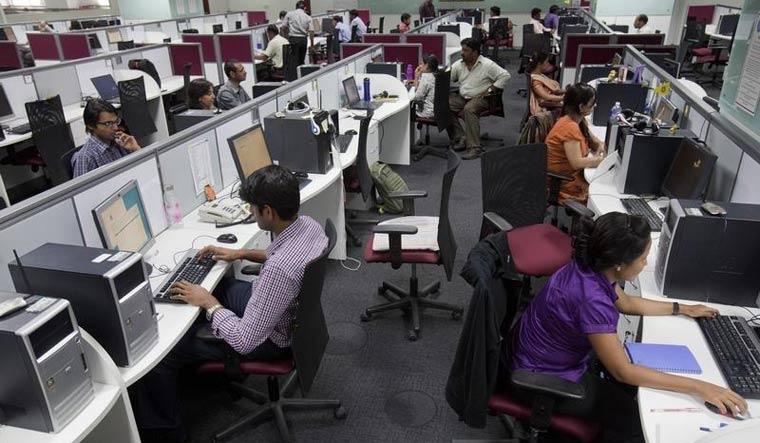 With automation taking place at a much faster pace across industries especially in the tech space, domestic software firms that employee over 16 million are set to slash headcounts by a massive 3 million by 2022, which will help them save a whopping $100 billion mostly in salaries annually, says a report.

The domestic IT sector employs around 16 million, of them around nine million are employed in low-skilled services and BPO roles, according to Nasscom.

Of these nine million low-skilled services and BPO roles, 30 per cent or around three million will be lost by 2022, principally driven by the impact of robot process automation or RPA. Roughly 0.7 million roles are expected to be replaced by RPA alone and the rest due to other technological upgrades and upskilling by the domestic IT players, while it the RPA will have the worst impact in the US with a loss of almost 1 million jobs, according to a Bank of America report on Wednesday.

Based on average fully-loaded employee costs of USD 25,000 per annum for India-based resources and USD 50,000 for US resources, this will release around USD 100 billion in annual salaries and associated expenses for corporates, the report says.

"TCS, Infosys, Wipro, HCL, Tech Mahindra and Cognizant and others appear to be planning for a three million reduction in low-skilled roles by 2022 because of RPA up-skilling.

"This is a USD 100-billion in reduced salary and other costs, but on the flipside, it offers a likely a USD 10 billion boon for IT companies that successfully implement RPA, and another a USD5 billion opportunity from a vibrant new software niche by 2022. Given that robots can function for 24 hrs a day, this represents a significant saving of up to 10:1 versus the human labor, says the report.

Robot process automation (RPA) is application of software, not physical robots, to perform routine, high-volume tasks, allowing employees to focus on more differentiated work. It differs from ordinary software applications as it mimics how the employee has worked instead of building a workflow into technology from ground up and thus minimising time to market and greatly reducing cost over the more traditional software-led approaches.

Offshoring helped domestic IT sector to grow from around one per cent of GDP in 1998 to seven per cent today, a highly strategic sector for its economy and has also significantly outgrown their Western peers (mainly Accenture, Capgemini and Atos) with an annual revenue growth of 18 per cent between 2005 and 2019.

Another key reason for the RPA-driven job loses is that many countries that had offshored their work in the past are likely to bring the jobs back to their own home markets.

Developed countries will also look to increasingly bring back offshored IT jobs and either use native IT workers or domestic software robots like RPA to secure their digital supply chain and ensure future resiliency of their national technology infrastructure, reasons the report.

Software offshoring began in the 1970s and the 1980s when the personal computer began to gain traction when major world players began shifting focus to trade liberalisation.

However, despite such massive automation, major economies like Germany (26 per cent shortage), China (7 per cent), India (5 per cent) Korea, Brazil, Thailand Malaysia and Russia will likely face a labour shortages, warns the report, adding on the contrary South Africa, Greece, Indonesia and the Philippines will have surplus labour for the next 15 years.

According to the report, faster automation is driven by the shrinking talent pool of high-skilled jobs in developing economies, the need for which will only jump, but the global high-skill talent pool is shrinking and exposing outmoded immigration systems.

The report goes onto warn that emerging economies mostly India and China face the most risk of technology driven disruptions which can impact up 85 per cent of jobs in countries like Kenya and Bangladesh.

India and China are at greatest risk of skills disruption, while Asean, the Persian Gulf and Japan are at the least risk. Perhaps the most worrying trend is that emerging market jobs are most at risk of automation because of the low-/mid-skilled nature of sectors like manufacturing, highlighting the risk of premature de-industrialization.