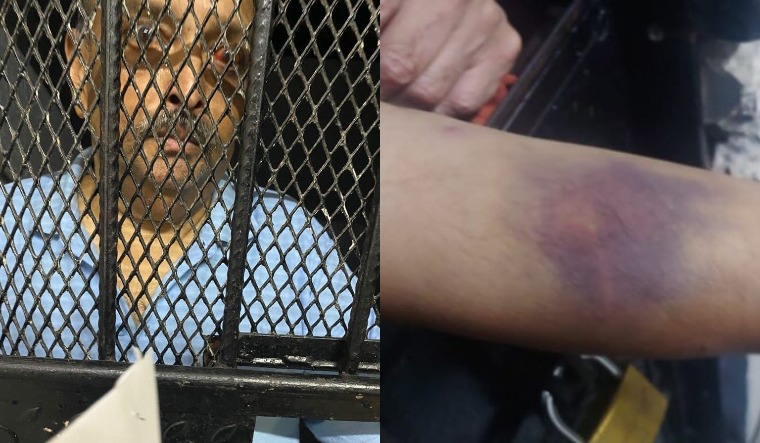 The Antigua Newsroom, a news outlet in Antigua and Barbuda, has published what are claimed to be the first images of fugitive diamantaire Mehul Choksi in police custody in Dominica. Last week, Choksi had allegedly fled Antigua, his adopted homeland since 2018, and reached Dominica, where he was arrested.

The images from Antigua Newsroom showed Choksi behind bars. One of the images show Choksi stretching forth his arm to show what appears to be bruises. Choksi and his lawyers had alleged that Choksi had been abducted from his home in Antigua and tortured.

The High Court in Dominica will continue to hear the status of Choksi's repatriation on Monday. The government of Antigua and Barbuda had said last week that it wanted Choksi to be repatriated back to India, where he faces charges in the PNB scam.

Meanwhile, on Saturday, the presence of a business jet at the Douglas Charles Airport in Dominica triggered a buzz on whether it was related to the Mehul Choksi issue. The Bombardier Global 5000 aircraft belonged to Qatar Executive, a subsidiary of Qatar Airways that offers corporate jet services.

Media reports in India said the aircraft left New Delhi on May 28. Last week, Antigua and Barbuda Prime Minister Gaston Browne had said Choksi could be repatriated by a private jet back to India.

On Saturday, Browne confirmed that the aircraft had arrived from India, Antigua Newsroom reported. Browne told a radio station that he understood the Indian government had sent documents that would confirm Choksi was "indeed" a fugitive and the documents would be utilised in court. Browne noted "Indian government seems to be going all out to make sure he is repatriated to India."

Browne was quoted by Hindustan Times as saying, "We are determined to revoke Choksi’s citizenship and to concurrently pursue his extradition to India to face criminal charges there. There has been no violation of Choksi’s legal and constitutional protections, despite the decision of my administration to revoke his citizenship."

The Mehul Choksi issue is also causing a political firestorm in Antigua.

“After mischievously accusing my administration of harbouring Mehul Choksi, who has an Interpol Red Notice, they (UPP) are now seeking to sanitise this fugitive to get campaign funding. My administration’s revocation of Choksi’s citizenship has been frustrated by a litigation brought against the state,” Browne was quoted as saying by local media outlets.